Ugandans, please stop embarrassing yourselves on social media. Those are global platforms in case you did not know and everything you say on social media remains forever. Even if you delete it.

It was interesting when I woke up this morning and some man in Kampala had been on social media talking about a piece I published and shared yesterday September 19, 2019.

Below is the piece I posted.  Naturally, he has a very poor grasp of the English language.  My sources tell me that his first degree was not law. He did something called Social Sciences specializing in Rural Development.

Many years later, he returned and took a law degree as a side kick.  Now, what is interesting is the foundation.

A rural development foundation naturally does not allow some people to read extensively and get a solid footing in the Queen’s language.  This explains why he would not understand the usage of the word MAY.

MARTHA LEAH NANGALAMA (just use Google if you have never heard that name).
Moncton, Canada
PS: I know more about international diplomacy than a rural development lawyer in Uganda.
===== 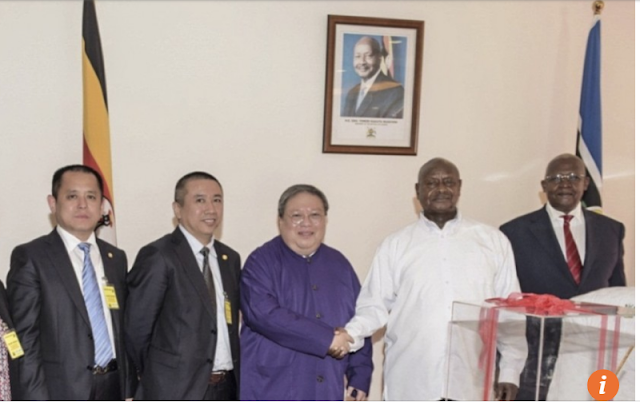 WHY MUSEVENI MAY NEVER VOLUNTARILY SET FOOT ON THE U.S.A SOIL AGAIN

CHANGE OF GUARDS – Uganda’s military dictator, Museveni had always been an ardent attendee of the annual U.N General Assembly in New York. However, he skipped the 73rd UN General Assembly in September 2018 but he instead sent his Prime Minister to represent Uganda. According to press reports, Museveni is said to have told his cabinet that he saw no logic in spending taxpayer’s money by travelling to New York to make a 15 minute address to the UN General Assembly.

Around that time, the USA law enforcement and judicial agencies were investigating a $1,000,000 bribe by a Chinese to Museveni and his in-law and Foreign Affairs Minister, Sam Kutesa. It had been alleged that Patrick Ho, the former Hong Kong Minister of Home Affairs offered the two Ugandans bribes in anticipation of being granted major government infrastructural projects in Energy, railway, and tourism.

The said bribe was negotiated through Sam Kuteesa during the time he was at at the UN. The US $500,000 for Museveni dubbed campaign donation was delivered in cash in May 2016 when Patrick Ho traveled to Kampala for Museveni’s swearing in ceremony. In one of the series of email exchanges with Sam Kuteesa, Patrick Ho wrote;
“As we are about to board the plan[e] to Uganda, we are preparing to bring with us some very ‘nice’ gifts to your President and to [the Ugandan Foreign minister] to celebrate the occasion. We shall require special assistance with your customs procedure. Please assist in whatever way you can otherwise we will have to make other plans.”

Kutesa’s $500,000 bribe was paid via a wire transfer from HSBC bank in Hong Kong (China) through an intermediary HSBC bank (USA) to Stanbic bank in Uganda on May 6, 2016.

Patrick Ho was convicted by the Federal Court in December 2018 and is serving the custodial sentence in the USA. The fate of those that he offered the bribe (Museveni and Kuteesa) is in balance. Coupled by the recent sanctioning of the former police chief, Gen. Kalekyezi by the State Department, it would be risky for both Museveni and Kuteesa to set foot on the USA soil. Unlike the 2018 scenario, this time around Museveni may use the excuse of hosting the Commonwealth Parliamentary Conference to once again dodge attending the UN General Assembly in New York.