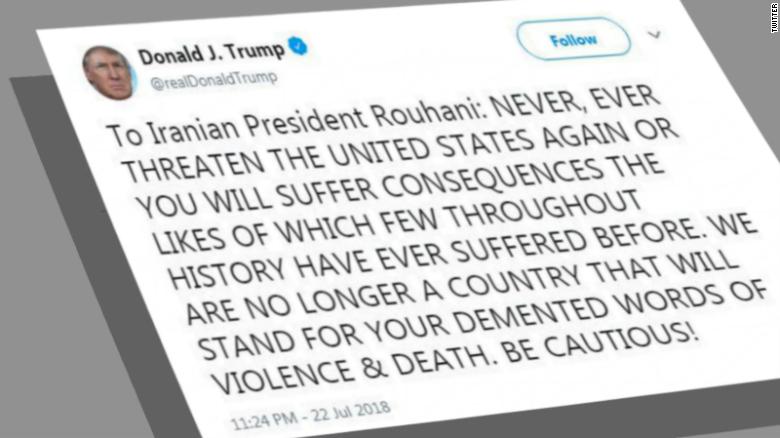 (CNN) – It probably feels like second nature to see a block of all-caps type and assume one of a few things:

you’re being threatened
you’re being yelled at
you’re about to fall head-first into a drunken Facebook rant
you’re receiving some important news
you’re getting a bulletin from the National Weather Service
(or, maybe all five — in which case, you’re in for a bad day)
The use of capitalization to grab attention, to convey importance or urgency, or emphasize a thought is a common stylistic usage in the internet age. Even the President of the United States seems to be a fan of the practice. On Sunday night, he issued a mostly all-caps Twitter screeddirected at Iranian President Hassan Rouhani.
“To Iranian President Rouhani:,” he wrote, “NEVER, EVER THREATEN THE UNITED STATES AGAIN OR YOU WILL SUFFER CONSEQUENCES THE LIKES OF WHICH FEW THROUGHOUT HISTORY HAVE EVER SUFFERED BEFORE. WE ARE NO LONGER A COUNTRY THAT WILL STAND FOR YOUR DEMENTED WORDS OF VIOLENCE & DEATH. BE CAUTIOUS!”

The tweet instantly became a meme, with people using his form to mimic all kinds of all-caps phenomena, from a typical scam e-mail forward to shouted Spice Girls lyrics.


While Trump’s tweet about the Iranian regime may be riding the line when it comes to typical internet etiquette, he usually favors a more pointed deployment of the all-caps style. In the past, he has used it liberally to emphasize single words or phrases like “ILLEGAL,” “GREAT REVIEWS,” and of course “FAKE NEWS.” 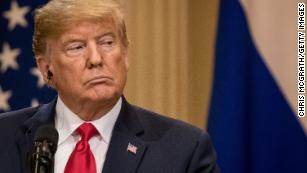 However it is used, whenever you see all caps, you know you should be paying attention — and possibly covering your ears. But have you ever wondered why?
According to typography expert Paul Luna, it’s about taking up space. He told the New Republic in 2014 that “All-capitals provide visibility—maximum size within a given area.”
“All-caps in an email looks like shouting because when someone is shouting, you’re aware of the shout, and not the nuance,” he told the publication.

All-caps isn’t an internet-age phenomenon
Believe it or not, the idea of all-caps being seen as something forceful or loud isn’t a new development — there are texts going back as far as the 1800s that make this association.
Dictionary.com credits some early internet message board denizens with setting the modern foundation for what we now collectively understand: Typing in all caps is essentially yelling. And just like yelling in real life, it is sometimes useful, and sometimes just plain rude.

According to Matthew Butterick, the author of “Practical Typography,” capitalizing words or even phrases is something that should be done “judiciously.” After all, there is a fine line between a deftly-employed shout and a wall of all-caps text that looks like it belongs in an e-mail from your technologically-deficient grandma.

“DON’T CAPITALIZE WHOLE PARAGRAPHS,” he writes. “THIS HABIT ORIGINATED WITH LAWYERS AND HAS INFECTED SOCIETY AT LARGE. THUS, MANY WRITERS STILL BELIEVE THAT CAPITALIZATION COMMUNICATES AUTHORITY AND IMPORTANCE.”
In addition to being exhausting, all-caps screeds are hard to read. “Cognitive research has suggested the shapes of lowercase letters…create a varied visual contour that helps our brain recognize words,” Butterick writes. “Capitalization homogenizes these shapes, leaving a rectangular contour.” 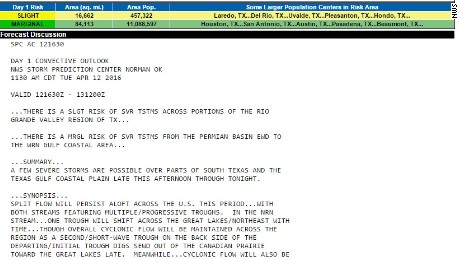 This wasn’t always the (upper) case


The association of all-caps with big, loud and important stuff is so ingrained in our internet-addled brains, it’s easy to forget it wasn’t always the (upper) case.
According to Dictionary.com, the Roman script our current Modern English script are based upon didn’t even have a lowercase form when they were first used almost 2,000 years ago.
This type of sript is called majuscule, and it basically means by today’s conventions, they just yelled everything ALL THE TIME.

Eventually, many scripts evolved to include miniscule, or lowercase letters, and a combination of the two cases was worked out. This combination allowed for emphasis and, because of the varying shape of the letters, an easier reading experience.
While the majuscule case — or uppercase — was still deployed to convey what Paul Luna calls “grandeur” or “aesthetic seriousness,” the dawn of the internet era has led a lot of institutions to reconsidered their all-caps uses.

In fact, in 2013, the US Navy switched its messaging away from fully uppercase messages. Lowercase messages, it said, “provide a more readable format.”