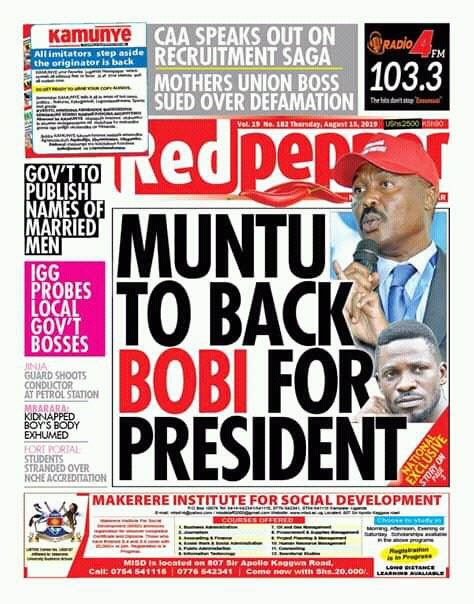 As much as I respect Redpepper and the other online news sites which have published that story about Gen. Mugisha Muntu (RTD), I do not think the story is true. Here is a search I just put in Google.

“mugisha muntu will not run for president”. Screen shots follow. 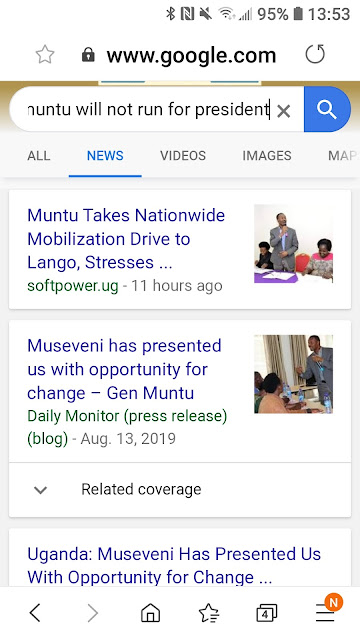 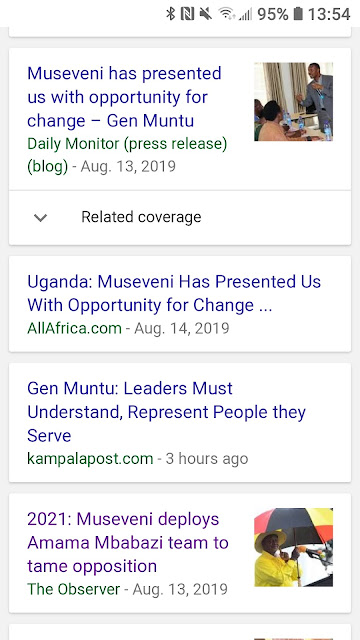 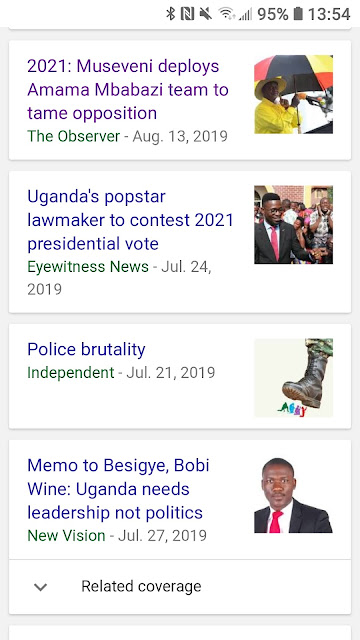 Thanks to Digital Footprint, most of the people who are saying that Gen. Mugisha Muntu (RTD) will not run for presidency and has endorsed Bobi Wine are the same people who spent years calling Muntu a mole.

You are the same people now saying he will not run for President of Uganda and has endorsed Bobi Wine to run for presidency.

If I remember clearly, in last week’s statement by Muntu, he said ANT will work with other opposition members to front only one candidate for elections in every constituency in Uganda.  He also stated that Opposition will discuss and front only one candidate for presidency for 2021.  There is no where in his statement where Muntu said he will not run or that he has endorsed Bobi to be the only candidate.

You will also remember that when Muntu was in FDC, he kept talking about building grassroots structures. One cannot help Uganda without the masses in the rural areas being involved in the decision making of their nation.

I think some media houses are making a very big mistake to speculate about Muntu and ANT.  Sure, some of you are paid to spin news or slant reporting but it is not right that a nation which is suffering so very much starts to spread untruths.

I still stand by what I said in 2013 / 2014.  Mugisha Muntu has never been a mole.  He will never be a mole.  You can sandwich him anyway you want but he is far above that.  #CountryFirst and to now be saying Mugisha Muntu has endorsed Bobi Wine for President of Uganda!!! Perhaps our friends in NRM, FDC and other parties whose followers might be propagating lies should step back and ask who is behind such a story.  IF ONLY THEY COULD READ THOUGH!!!

In Case You Missed It…. Gen. Muntu is one of the thousands of citizens who can ably lead Uganda. Even Museveni appreciates capacity to resiliently pursue his political ambitions. To contain Mugisha Muntu, Museveni opted to fast track him through the ranks and made him the Army Commander. At the same time and as usual, Museveni would go behind Muntu to undermine Muntu’s. Museveni has also unusually not been physically humiliating and demeaning Gen. Muntu’s past performance; a factor that accounts for Muntu being branded a Museveni mole. By doing so, Museveni had set in motion the systematic destruction of Gen. Muntu’s political career.

Going by the above brief backfround, Gen. Muntu’s political journey is faced with an uphill task of going over the following hurdles;

1. VIOLENT ELECTION RIGGING
As is always the case, Gen. Muntu will have to contest against the state with all its resources and security machinery lining up behind Museveni and his Musevensm. Ugandans have lost all hope of ever having a peaceful change of leadership. Museveni is determined to violently hold into power but Gen. Muntu is advocating for a diplomatic and civil approach. He has to convince Ugandans that Museveni’s security machinery and Electoral Commission will hand Muntu victory.

2. BACKLASH FROM UPC
Museveni’s long thriving propaganda against UPC and Obote as being responsible for Uganda’s woes no longer sells. The population have long realized that UPC and Obote were not as evil as Museveni. For Gen. Muntu, a son of a prominent UPC founding member and personal friend of Obote, without being targeted but opted to join Museveni’s Bush War against the UPC was treacherous enough to invite a backlash from UPC. Much as UPC may look faded, its roots are still strong in some sections of the population and regions. For the same reason, Muntu will face a big task to convince the DP to rally behind a son of a UPC founding member.

3. COUNTER INSURGENCY ATROCITIES
Gen. Muntu was Museveni’s Director of Military Intelligence (DMI), Chief Political Commissar (CPC), Northern Uganda based 5th Division Commander and later overall Army Commander for a record nine years at the height of insurgency in the north and north eastern region. During his tenure the army committed heinous crimes against the population. The population don’t not know that Muntu was just a figurehead Army Commander while Museveni was directly in charge of the army’s field operations. In Muntu’s effort to de-link himself from those crimes, he will have to incriminate Museveni and some of Museveni’s top Generals. Consequently Museveni and company will fight back hence leaving Gen. Muntu gravely bruised. MUSEVENI ET AL WILL FIGHT MUNTU FOREVER to avoid being implicated in the atrocities they committed and will try to blame Muntu.

4. RWANDESE LINKAGE
Gen. Muntu is said to be an ethnic Munyarwanda. Unfortunately Ugandans are up in rage and furry over the Banyarwanda whom they associate with the Museveni regime’s political and economic repression. In their usual survival instincts, the Banyarwanda will throw their weight behind Gen. Muntu.

5. POLITICAL OPPORTUNISM
Gen. Muntu left the Museveni regime and joined the FDC where he has held different top positions including the topmost, party President. What he only failed to achieve under the FDC was making it to the ballot paper as a flag bearer. He does not dispute his losses in FDC since they were as a result of a democratically free and fair process. He has an uphill task to convince Ugandans that his departure from the FDC is not solely driven by presidential ambitions.


“There are complications. There is a desire to become the president but getting there can be a problem. I have the desire, that is why I am doing what I am doing.”
Gen. Muntu – 28/9/2018

6. THE AMAMA SYNDROME
Ugandans learnt lessons from the departure and futile presidential bid of Museveni’s former Secretary General and closest confidant, Amama Mbabazi. Ugandans had hoped that having been an insider, Mbabazi was leaving with not only a significant section of Musenists, but also Museveni’s secrets pertaining to election rigging. Instead he ended up being allocated 130,000 votes countrywide. It’s coming to two decades since Gen. Muntu left the Museveni camp and if at all he had left the Museveni camp with any secret tactics, he ought to have applied them in FDC.

7. TACKLING MUSEVENI’S POWER BASE – THE MILITARY
As a former Army chief he would cause a lot of excitement if he had left yesterday. Unfortunately it’s coming to two decades since he ended his military career. As a strict disciplinarian, his tenure as army chief, Gen. Muntu made more enemies than friends in the army. He lost the battle against thieves in the army and the few non thieves have either left the army or have adopted to thieving which is the parameter for loyalty to Museveni. Using his usual divide and rule policy, Museveni had systematically painted Gen. Muntu as being insensitive to the ordinary soldiers’ welfare and that he was a mere “blackboard General”.


Currently, the strategic positions in the military are dominated by Museveni’s ethnic Bahima who for historical reasons don’t see eye to eye with Gen. Muntu. You may recall when as FDC President, Gen. Muntu denied audience to Gen. Ssejusa. The two fell out at a time the former was army chief.

7. ENERGIZED MUSEVENI
For Museveni who calls himself Ssebalwanyi (chief fighter) prides in having defeated many opponents. Gen. Muntu’s coming to the fold re-energizes Museveni to seek another round of election so that he can defeat his former Army chief. At worst, he can even opt to unleash his son as the presidential contender to violently and humiliatingly rigg out Gen. Muntu.

Therefore, unless Gen. Muntu swallows his pride and adopts the so-called radical approach to Museveni’s military dictatorship, his civil and diplomatic electioneering agenda may not sell. At best he may end at merely appearing on the ballot paper just as was the case with Gen. Biraro and Amama Mbabazi.

« UGANDA: Stop putting words in @MugishaMuntu mouth @HeBobiWine @KizzaBesigye1 @FDCofficial1 (Previous News)
(Next News) NTVUganda has added Mutebi says game against Oduparaka will be an assessment ahead of clash against African Stars video »