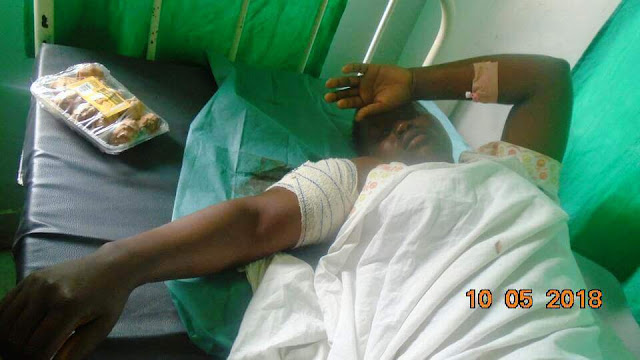 CHANGE OF GUARDS – The suspect victim, 27 years Gloria Aminyo is attached to URA’s Customs Enforcement Unit in Kasese. On 8th May 2018, Aminyo set off from Mpondwe border post in Kasese at 2.30PM escorting an Isuzu truck loaded with Palm oil and Gonja bananas destined for DRC. They went through Queen Elizabeth National Park heading for Ishasha border post in Kanungu with Eminyo in the co-driver’s seat and the turn boy on top of the truck. At 11.00PM, when they were remaining with just one KM to reach Ishasha border, they were ambushed by armed robbers. The robbers shot Amenyo in the arm before running away with her AK 47 gun and other personal effects.

The period of nine hours (2.30p.m to 11.00 p.m) from Mpondwe to Ishasha is suspect. The only justifiable account is that the truck delayed somewhere in between as other contraband was being loaded. Most likely the truck was smuggling the banned but luxurious immature fish. You will recall that renown rally race and leading dealer in immature fish, Ponsiono Lwakataka narrowly survived being shot by soldiers attached to URA last year along the same route but his driver was not so lucky as he was instantly killed.

Otherwise, why would an armed female soldier solely escort a truck through a vast national park moreover at night. For Ugandans, just prepare to pay with your blood for the damage that will be done with the stolen AK 47. We are yet to see if the Court Martial will charge Amenyo with failure to protect war material and cowardice in action.

INFORMATION IS POWER AND THE PROBLEM OF UGANDA IS MUSEVENISM —— AUTO – GENERATED; Published (Halifax Canada Time AST) on: May 12, 2018 at 07:01PM