UGANDA: Silence of Gen. Ssejusa and Hon. Mbabazi must be condemned loudly

In 2013, Gen. David Ssejusa (David Tinyefunza) gave us a glimpse of the Muhoozi Project.  It is too bad we were obsessed with none issues we did not hid his warning.

Following his publication which you will find at the end of this rant, Gen. Aronda mocked him and said “There is nothing like a Muhoozi Project or a plan to assassinate top Generals. You are a frustrated former officer”… Okay, maybe not exactly Aronda’s words but I was paraphrasing. I now wish we could dial up Aronda’s mobile.

In July 2015, Hon. John Amama Mbabazi announced that he was gonna run against Museveni for the elections of 2016. Many people mocked him.  In fact, it was mostly opposition that mocked JPAM.

For some of us who pay attention, these two gentlemen gave us hope.  Yet now, they are very silent.  From whom must we now get hope for change?  You both know our noise now is just noise.

It is a precarious time for Uganda opposition.  We lack unity. We lack Ubuntu.  We are yearning for change but this change will come from where?

President Yoweri Museveni is armed to the T. Opposition youth who do not understand a military dictator will pay a price. Daily, we are learning about opposition youth being kidnapped, arrested, vanishing or tortured, etc…

Uganda opposition must make a choice.  If you look at the events in Algeria and Sudan, everyone was united. Even the elites joined the cause. In Uganda, opposition is terribly divided.  Elites are far too comfortable to join the cause.

What Uganda might end up with will be either Zimbabwe or DRC. In Zimbabwe, ZANU-PF did an inside coup to remain in power and protect their loot.

In DRC, the elections were hijacked and the current president Tshisekedi must seek permission from Kabila for all decisions.

Uganda opposition also needs to remember that unlike all the other countries where dictators were kicked out, Uganda’s security organs are all controlled by none native Ugandans.
== 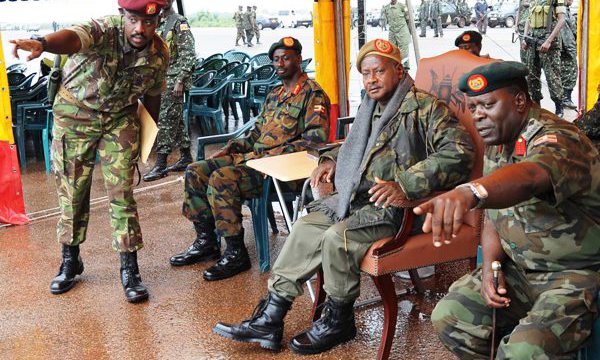 Defence minister Crispus Kiyonga arrives at Parliament yesterday where he made a statement regarding Gen. Sejjusa’s claims. PHOTO BY GEOFFREY SSERUYANGE
In Summary
Defence minister Kiyonga dismisses ‘Muhoozi Project’ claims, as relatives of Gen. Tinye’s aides go to court.By SHEILA NATURINDA & ISAAC IMAKA
The Government yesterday went on the record, denying that there are plans to have President Museveni’s son, Brig. Muhoozi Kainerugaba, replace him as leader of the country.
“I assure the House that there is no such a Muhoozi project in the army,” Defence minister Crispus Kiyonga told Parliament.The government’s denials were part of its official reaction to Gen. David Sejjusa aka Tinyefuza’s claims that some government officials opposed to the “project” had been singled out for assassination.
Daily Monitor this week published details of a letter Gen. Sejjusa, the coordinator of intelligence agencies, wrote to the Internal Security Organisation boss, asking that the assassination claims be investigated.
In an interview with this newspaper, Gen. Sejusa admitted authoring the letter.
But addressing MPs yesterday, Dr Kiyonga said the letter bearing Gen. Sejusa’s instructions has never reached the director general of the Internal Security Organisation.
The defence minister also denied that there is any criminal conspiracy by senior military officers to either frame or assassinate colleagues.
“And ordinarily, Gen. Sejusa is the coordinator of both external and internal security organisations and if there’s such a serious matter Gen. Sejusa should have addressed it himself or met the Commander-in-Chief,” Dr Kiyonga said.
The minister’s statement, which was unsigned, said Gen Sejusa had abused the laws that govern the army and that the matter would be dealt with by his Commander-in-Chief, President Museveni.
Dr Kiyonga’s statement drew mixed reactions from MPs, with some fearing that the country could be on the brink of a coup given the serious allegations which have been made about senior military officials.
Army MP, Gen. Elly Tumwine, later gave a lengthy lecture on the UPDF and its good intentions for the country, which he concluded by blaming Gen. Sejusa.
“This matter should not cause undue excitement. It is not the first time in the history of UPDF, in the history of this Parliament and in normal life in society that somebody wakes up not feeling well,” Gen. Tumwine said.
Other MPs, however, observed that Gen. Sejusa, who is one of the 10 army representatives in the House, could be the only top military man courageous enough to speak his mind on such a sensitive issue.
MPs speak
Mr Wafula Oguttu (Bukhooli Central) said: “We have had disagreements in the Ugandan army before and it ended up in a coup. We had disagreements in the UNLA, and it ended up in a coup. So, we should not downplay these simmering disagreements. If everything is fine, why are soldiers deserting?” he asked.
Both the Chief of Defence Forces, Gen. Aronda Nyakairima, himself reported to be among the targets for alleged assassination, and police chief Lt. Gen. Kayihura have since issued strong rebuttals to Gen. Sejusa.
Dr Kiyonga confirmed that Gen. Sejusa is out of the country but could not say when is expected to return.
Background
Cabinet on Wednesday asked the Defence Minister, Dr Crispus Kiyonga, to respond to allegations made by the Coordinator of Security Agencies, Gen. David Sejjusa, that there were plans to assassinate senior government officials opposed to alleged attempts to have First Son Brig. Muhoozi Kainerugaba take over the presidency from his father, President Museveni.
editorial@ug.nationmedia.com
=====================
Kiyonga’s speech
Right Hon Speaker and Hon Members of Parliament.
You will have seen headlines in our local press making serious allegations of a security nature. It has been alleged that a criminal plan had been hatched to;
(a) Frame certain senior officers of Government and the army in order to make it appear that these officers had committed serious and capital offences.
(b) To assassinate certain people perceived to be opposed to the so called “Muhoozi Project”.
This information has no doubt caused concern across the breadth of our population.
The reports in the press are attributed to Gen. David Sejjusa. Gen. Sejjusa is a four-star General, a historical member of the UPDF and an honorable member of this House.
He knows only too well the laws of the country and the law that governs the force in which he continues to serve. It is therefore unfortunate that he should make such serious and false allegations in the manner he has done.
I would like to assure this August House and the country at large that there has not been and there will never be such criminal acts of senior members of Government and the army conspiring to frame their colleagues or indeed anyone in the population. There is no plan that we are aware of to assassinate certain people.
The UPDF and the NRM have clear track record. Such underhand and criminal methods have never been the way these institutions work.
The army is cohesive, united and under effective command and control. And the population and the leaders should remain assured that the country is safe and stable.
Within the context of the constitution and the laws that govern this country, the President and Commander-in-Chief is taking appropriate measures to respond to the acts of indiscipline that have been portrayed to the population through the press and other means.
Mr Speaker, Sir, I wish to request that Parliament notes this statement and gives time to the Commander-in-Chief to take appropriate steps in line with the law.
And in order not to further alarm the population, I request that this statement shouldn’t be debated.
I thank you Right Hon Speaker and Hon Members of the August House.
===========
Uganda’s Muhoozi Kainerugaba denies ‘monarchy’ plan

However, Brigadier Muhoozi Kainerugaba did not rule out harbouring presidential ambitions, saying Ugandans would choose the next leader.  These are his first comments since a row broke out in May over claims that he is being groomed to succeed his father.
Elections are due in Uganda in 2016.

The power to choose how Uganda is governed lies with Ugandans and not a single individual,Muhoozi Kainerugaba, President’s son
In May, police raided the offices of two local newspapers, Daily Monitor and Red Pepper, which published a letter Gen Sejusa wrote to army bosses, warning that people who opposed the “Muhoozi project” risk being killed.
Gen Sejusa last week told the BBC that Uganda was being turned into a “political monarchy” – a charge denied by Brig Kainerugaba.
“Uganda is not a monarchy where leadership is passed on from father to son,” he said, in a statement issued by army special forces spokesman Edison Kwesiga.
“This so-called [Muhoozi] project is a people’s creation.”
Mr Kwesiga said Brig Kainerugaba, 39, had not declared his ambitions and the statement had been issued to “clarify claims by a section of the opposition that there are plans to make him take over”.
“The power to choose how Uganda is governed lies with Ugandans and not a single individual,” the statement quoted Brig Kainerugaba as saying.
Brig Kainerugaba has risen rapidly within the military, fuelling speculation that he is preparing to become the next president.
He was appointed head of the special forces unit in 2008 and was given control of the elite presidential guard in 2010.
Gen Sejusa told BBC Focus on Africa that Brig Kainerugaba represented a “national project of Mr Museveni to subvert the existing political system in order to perpetuate himself”.
“The central issue is a political monarchy – a life presidency and then transiting [to] a political monarchy,” he added.
Mr Museveni has been in power since 1986, and has not indicated what his plans are for the 2016 election.

Police start investigating Monitor journalist’s caseTuesday May 7 2013 Advertisement By Bill Oketch The Police Professional Standards Unit, has started investigations into the case of Daily Monitor journalist Mr Emmanuel Opio. This development comes after the Human Rights Network for Journalists (HRNJ) lodged a complaint on behalf of Mr Opio early last year, in which Mr Opio alleges that he was assaulted and coerced to surrender his camera and later his photos were deleted by police officials.

Muhoozi project doesn’t exist – govtFriday May 10 2013 Defence minister Kiyonga dismisses ‘Muhoozi Project’ claims, as relatives of Gen. Tinye’s aides go to court. Advertisement By SHEILA NATURINDA & ISAAC IMAKA The Government yesterday went on the record, denying that there are plans to have President Museveni’s son, Brig. Muhoozi Kainerugaba, replace him as leader of the country.

Uganda’s Muhoozi Kainerugaba denies ‘monarchy’ plan – BBC NewsUgandan President Yoweri Museveni’s son has denied that Uganda is a “political monarchy” in which his father will hand the reins of power to him. However, Brigadier Muhoozi Kainerugaba did not rule out harbouring presidential ambitions, saying Ugandans would choose the next leader.

10 reported dead in Kampala riotsUpdate: 14 September 2009: Business returned to normal in the Ugandan capital Kampala on Monday, after up to 15 people were killed last week during clashes between security forces and supporters of Ronald Muwenda Mutebi, head of the Kabaka ethnic group. Public transport

UGANDA: WHY MUSEVENI MINIMIZED HIS ELECTION RIGGING IN BUGANDA REGION