UGANDA: @PoliceUG have no power to disperse rallies – court 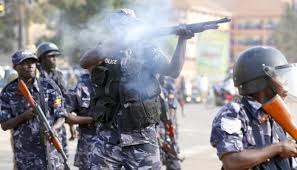 Kampala- As the country heads towards the 2021 General Election, the Constitutional Court has nullified some sections of the Police Act, reducing powers of the police to disperse public gatherings.

In the lead judgment written by Justice Kenneth Kakuru, the Constitutional Court last Friday declared Section 36 of the Police Act unconstitutional on account that it authorises and legitimises police brutality against innocent citizens.

Other justices in the judgment are Deputy Chief Justice Alfonse Owiny-Dollo, Fredrick Egonda-Ntende, Hellen Obura and Ezekiel Muhanguzi.
Section 36 of the Police Act empowered a police officer who, upon dispersing a rally, the persons continue assembling, to use such force as is reasonably necessary for overcoming that resistance and could not be liable in any criminal or civil proceedings for having used that force to cause harm or death to any person.

“The same law (Section 36) goes on to give immunity to the police who kill citizens of this country. Under this law, the police officers cannot be prosecuted or held in any way accountable. The victims cannot get redress through civil suits instituted against individual officers or their supervisors.

The law as it is permits the police to torture, maim, injure and extrajudicially execute Ugandans without any retribution whatsoever. This law does not just condone, but it authorises and legitimises police brutality,” the court ruled.

“The government cannot complain against acts of police brutalising the people with impunity as long as Section 36 of the Police Act remains on our statute books. Even if government and the police leadership intended to punish an errant officer, such an officer would seek refuge and protection under the impugned law,” the court added.

The court also observed that the law gives police the licence to kill citizens who are peacefully gathered to voice their grievances and also gives the Force immunity from prosecution for their repression.

The court added that Section 36 of the Police Act invokes sad memories of the South African incident that saw 150 White policemen fire live ammunition into a peaceful gathering of black South Africans, killing 69 of them, mainly children and women.

The same court also found sections 35, 37 and 40 of the Police Act as being inconsistent with the constitution.
Section 40 prohibited the use of microphones or voice amplifiers in addressing the public without a written permission from the police while Section 35 empowers a minister in his his/her opinion to determine whether or not it is desirable to limit the rights of Ugandan citizens.

Gatherings at city square
On assembling at the Constitution Square, the court observed that there should be restrictions, stating that since its physical location is between the Central Business District and Kampala High Court, if rallies are allowed to take place there uncontrolled, they would disrupt activities at court and in the city.

The court had also been asked to find out whether it was unconstitutional for the police to ban pubic rallies, assemblies and processions at the Constitution Square.

The judgment was triggered by a constitutional petition filed by a citizen, Mr Moses Mwandha.
In his petition, he stated that he was the coordinator of Busoga Pressure Group and that on September 11, 2006, he applied to the then Inspector General of Police, seeking permission to hold a peaceful demonstration against failure of the Uganda Investment Authority to equitably distribute investment opportunities between the capital and Jinja District.

He stated that the police boss responded to the group on September 27, 2006 informing them that it was not necessary to demonstrate and advised them to channel their grievances to their representatives in Parliament.

Law on public assembilies
The Public Order Management Act came into force in 2013 in the wake of the walk-to-work demonstrations. Section 4 of the law defines a public meeting as “a gathering, assembly, procession or demonstration in a public place or premises held for the purpose of discussing, acting upon, petitioning or expressing views on a matter of public interest.”

Section 4(2) (e) states that a public meeting shall not include “a meeting of the organs of a political party or organisation convened in accordance with the constitution of the party and held exclusively to discuss the affairs of the party.”

Section 8 (1) reads: “Subject to the directions of the IGP, an authorised officer or any other police officer of or above the rank of inspector, may stop or prevent the holding of a public meeting where the public meeting is held contrary to this Act.”
Police have always used the law to quash public assembilies.

It adds: “An authorised officer may, for the purposes of subsection (1), issue orders, including an order for the dispersal of the public meeting, as are reasonable in the circumstances.”

Across the country, police have waved the law like a conventional flag in a war zone signaling ‘cease-fire’ to, especially Opposition activities. Perhaps, more than any other law, POMA’s prominence is highest on the pecking order of public debate.

Did you find apk for android? You can find new Free Android Games and apps.
Sharing is caring:
police brutality, UGANDA, MUSEVENI MILITARY Uganda, MUSEVENI MILITARY, Police Brutality Comments Off on UGANDA: @PoliceUG have no power to disperse rallies – court Print this News