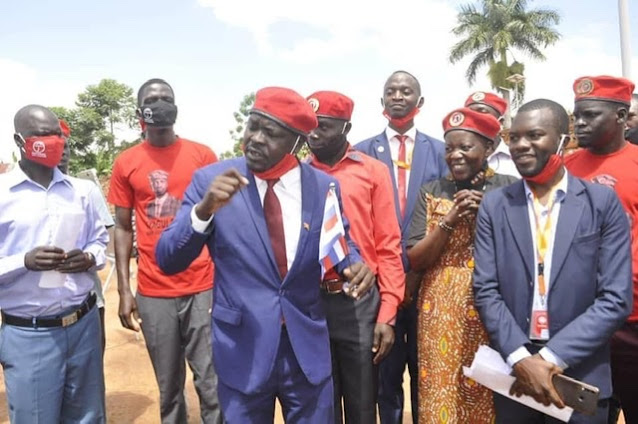 As Ugandans celebrate NRM day, I am here battling for my life at a Nairobi Hospital.  It was on 19th January 2021, when I left Gulu for Pader in the company of my wife and driver.  I was in pretty good health. My schedule was to go to Pader Police station and pick my vehicle and generator that were impounded during campaigns and to avail myself if there was anything police wanted from me.  I arrived at Pader Police station at midday and immediately  went to the office of the  Deputy OC station who recorded my statement and charged me for;

1) Breach of COVID regulations during my campaign rallies;

2) Disobeying lawful orders from Police.  I was granted police bond.  I then asked for the vehicle .  The Deputy OC station consulted the Regional CID who ordered the vehicle be given to me.  As I was in the parking lot trying to jump start the vehicle, a contrary order came that I should not leave until the DPC,  Ramathan Tai and OC Cid Musime Enock arrive. The OC CID  ordered me rudely to get back inside the police station or he uses force. He forcefully turned off my car and walked me into the DPC’s office and one policeman named Kalanzi of FFU showed up.  They started moving in and out of the DPC’s office to talk to the Deputy IGP Paul Lokech while pondering their next move.  The DPC and OC CID then summoned the Deputy OC station asking him why he had given me police bond and got angry with him.  Then the Deputy OC station  told them the Regional CID gave him the go ahead.  The DPC then summoned the OC Traffic who then told me they needed my driving permit and insurance of the car.   And said that the car had an express penalty ticket I had not paid 5 months ago so I was going to be charged for a separate traffic offence and I required separate police bond.  I told them I was already on police bond, I  can use it to report back as required to.   The OC Station told me they needed money for towing the vehicle, repair of the police vehicle stoned by angry youth when they confiscated my generator and money for wasting their time as they had planned to arrest me from Rachkoko but failed.  I was to pay 3 million shillings in total according to them.

Immediately the DPC and OC CID walked out and I overheard the DPC talking to the Deputy IGP Lokech in the corridor saying “yes sir I will  detain him”. (The DPC and OC CID are Lokech’s blue eyed boys who have just been transferred to Pader during the campaign time).  It was coming to 4pm since midday and no clear head way was being made.  My police bond was just a mere piece of paper as my freedom was curtailed and I couldn’t leave the police station.

At around 5 pm, the Police Officer called Kalanzi walked into the DPC’s office with 4 small bottles of mineral water customised in the name of Uganda Police Force.  Kalanzi gave one bottle to the DPC, one bottle to the OC station, one to the OC CID and one to me.   The bottle given to me that I recall, was held in an obtuse position.  I took the water naively “kumbe” that was the poisonous chalice.  These guys knew I would go to Pader Police Station sooner or later since my car was there and they had all the time to prepare a poisonous bottle of water for me.

WHAT COULD BE THE MOTIVE?

Komakech Christopher, who won the Aruu County seat is an “adopted son ” to the Deputy IGP Paul Lokech   who paid his school fees from S.1 to S.6.   Lokech bank rolled his campaign and even airlifted him to one of the campaign venues in a police helicopter.  So his “win” was not good enough.   They sat in a clan meeting and resolved to finish me off so that I don’t show up in 2026 .

I had already conceded  defeat and even called the radio station to wish them well but that was not enough for this soldier turned Police Deputy IGP.  Back to the mineral water, after drinking it, in less than 30 mins, I collapsed on the floor in the DPC’s office and all I could remember was seeing a blurred image of RDC Dusman Okee, Norbert Mao’s brother asking me if I could recognise him. In all this scandle, from detention of my vehicle, the RDC opted to remain aloof.  I later learnt that he was also in close contact with Lokech.

The RDC then organized  an ambulance and gave money for fuel am told  but when we reached a  petrol station according to my wife, she paid for fuel again (typical police corruption).  I was then taken to Gulu Regional Referral Hospital. I understand the ambulance was occupied by the OC CID Musime, a soldier and driver infront then behind had myself, my wife, a nurse and a policeman.  From Gulu hospital, I woke up at about midnight and my wife told me police had cordoned off the hospital area. In the morning, she told me that a policeman hurriedly opened the room door at 2 am and was shocked to find her in the room from his tone. He asked her, “you mean you slept here?” It’s like he had a plan to enter my room and probably inject me with more deadly substances.  As the day progressed, I learnt that I was actually under police detention at the hospital inspite of having police bond in my pocket.  The Doctors  at Gulu Hospital recommended my referral to another hospital. As they presented us the referral papers and we set to leave for Kampala in a private vehicle, the Gulu Police led by the OC station blocked us and even didn’t allow my car engine to be started.  I then lay on the open ground of Gulu Hospital from midday upto 6pm as the police wondered what to do next.  The Leader of Opposition, Hon. Betty Aol Ochan and Hon. Gilbert Olanya protested this police action and Hon. Gilbert Olanya called the Deputy IGP protesting his orders .  Later, the Leader of Opposition reached a settlement with the Gulu police that I am charged and sign a second police bond paper.  My life being the priority, I signed the police bond papers at 6 pm and the charge was “assault” of a person I didn’t know during the FUFA drum football event in September 2019. After signing the bond, I was taken to Lacor Hospital and spent a second  night in hospital.  The next day, Lacor referred me to Nakasero Hospital Kampala who eventually referred me to Nairobi.

I am here sick and tired of all this torture.  My life is not worth just the  position of MP which I have already lost .  As I plan to return to Uganda,  my lawyers who went to CID Kibuli in my absence to extend my bond, have informed me that the following are the charges waiting for me:

2.Breach of COVID regulations during campaigns.

6.Assault of the victor Christopher Komakech, MP elect Aruu County (a person I have never met physically.  Only saw his posters).

7.  Abscondment of 2  police bond appointments as I am in Nairobi.  Fellow UGANDANS, I thought of penning this down incase I do not make it, take this as a dying declaration that these people killed me;

c) Philip Adonga of Rachkoko who was with the police when they staged an ambush for me as I returned home from a rally at Awere at 8pm.

In case I make it, which my God tells me I will, I will file a case in court under the anti torture act on the above 4 police officers. Such flagrant abuse of office and impunity by Lokech and his boys should not be tolerated anywhere in Uganda. My vehicle will leave police by a court order and not any more underhand method . I thank the RT. Hon. Speaker of Parliament, who made my abrupt  travel possible.  Thanks to the Leader of Opposition, Hon. Betty Aol Ochan for all the effort and for standing surety for me, thanks to Hon. Okupa Elijah for all the tireless runs,  thanks to Hon.Gilbert Olanya for the spirited fight and thanks to my family and friends for standing with me and allowing me to  take them through all this ordeal.  Thanks to the medical teams of Gulu hospital, Lacor hospital and Nakasero hospital for your professionalism.  You all treated me well.

Above all, thank you Lord, the creator of heaven and earth for keeping me alive to this day.

Losers like me should be given time to heal and face the world from another dimension and not torment.