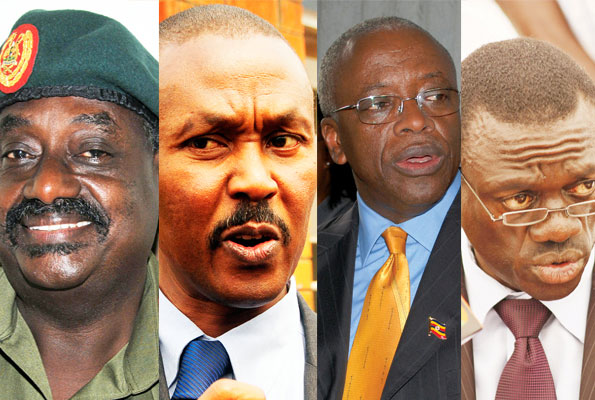 Why opposition is not serious is because they are fighting each other like cats and dogs.  By the way, it is untrue that cats and dogs fight. Our cat Pumpkin and our dog Theodore think they are siblings.

But you people in Uganda, do you know how you are tearing down our hopes of unsitting Military Dictator Yoweri Museveni?

Gen. Mugisha Muntu is innocent.  His team does not have STUPID people who spend all their data and social bundles abusing FDC, People Power or NRM.  ANT is a focused group. Thank you.

FDC and People Power better smarten up.  You are freaking out as if only one of your candidates must be president of Uganda.  Who died and annointed you?

Dr. Kizza Besigye and Hon. Bobi Wine must act now to stop their mad members alienating people who attempt to give suggestions.  Any leader who does not tolerate dissent is no different from Polo.

In 2013 when I joined the circus of Uganda opposition, NRM people were attacking FDC on social media. Granted, that is their job.

FDC people were attacking Muntu who was their president then. Attacking him in the name of Besigye.  They continued till Muntu quit FDC and now has his own party.

FDC soon started trashing Gen. Ssejusa. So, now we no longer had Muchebeni as our common enemy.  Muntu and Ssejusa were the enemy.

Not too long later, FDC started clobbering Hon. Amama Mbabazi.  So, now we had 3 enemies of our opposition efforts.

Not too long later, FDC assaulated Hon. Bobi Wine calling him all sorts of things.  Yet, Bobi always considered Besigye as a mentor.

FDC is a cult.  This needs to change.  The fact remains that Bobi is in the age group of 85% of Uganda’s population.  Young.  So young.  Some are terribly naive.  Some are plain Tupid.

Yesterday, November 11, 2019, a friend tagged me on an FB post by 933FM which had too many unsubstantiated information. I proceeded to comment that it was not true.  I think the post was a People Power leaning person. The poster was an idiot though. A kid descended on me abusing me “I know you.  Last election, you were all for Mbabazi.  Where is he now”?

REPLY: “Actually, the last election, I was #TeamOpposition”.

Then he became beligerent. “Where is your JPAM now?”  As if the kid was wearing blinders.

MLN: “Buddy, I said I was opposition. My records show. I begged for opposition to unite but I do remember saying many times that I was #TeamOpposition and I was with Dr. Kiyingi.

Then the #Munyampi showered on me more abuses.  I suppose he wanted me to say I am People Power.  Such rubbish.  We are OPPOSITION.

I defended Gen. Ssejusa because I believed he was opposition.  I defended Muntu because I knew he was not a mole and I still bet my life on this.  I defended Mbabazi because he had joined opposition and he was no longer our enemy.  I defended Bobi during Kyadondo East bi-election because FDC barking dogs were assaulting him on Social Media.  I had never even liked Bobi because of his homophobic ideas.  Bobi defended Museveni on the Kill Gays bill.

Yet, if Bobi is opposition, why were fellow opposition attacking him??? I got over my dislike of him because of the way he was being attacked by FDC.  This continues to this day.  FDC vs. Bobi.

Finally, yesterday, I mentioned that the ICC petition should be done without face to face.  This is the age of technology for crying out loud!  Then this morning, some FDC people descended on me for criticizing the method.  Label me as People Power all you want but some of those kids hate me.

Kids in People Power are the age group of my kids, so I only try to guide them but my gosh.  It is as if some of them were raised by Emiyayu.  No manners at all.  No respect at all.  And the attackers are really Illiterate.  Yet Bobi is a very intelligent man.

If opposition does not stop bickering and does not unite, we will not kick Jarukanga out of power.  By 2021 / 2023, there will be no opposition.  We are tearing ourselves apart.

I have been wrong only once in my predictions.  In 2017, I said “Museveni is gonna fire Gen. Kalekyezi (KK) and then gave a list of who would be appointed IGP.  None of the names got the job.  I had said “Posiko will appoint Gen. Abiriga as IGP after the former sacks KK”.  Okay, it was satire.

PLEASE, let us stop personalizing parties.  No one died and annoited Besigye or Bobi.  And all the energy we expend on attacking NRM social media #Banyampi, we can spend that te educating them about what we plan to do better.  We should campaign for our chosen leader based on his past record and what he intends to do to alleviate the suffering of Ugandans.

The rubbish of #MuseveniMustGo while kids are being killed, sold to Arabs, horrible education and atrocities on even students.  What are we doing?  What about the massive land grabbing and causing thousands of hundreds of native Ugandans to be displaced to now live in squalid IDP camps?