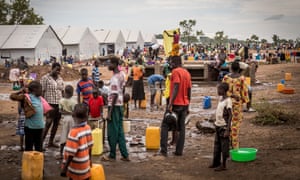 People at Bidi-Bidi camp in northern Uganda collect water from a tap provided by the UNHCR. Photograph: Gael Cloarec/LightRocket/Getty Images

Two senior Ugandan government officials have been charged with money laundering, corruption and abuse of office over the awarding of contracts at refugee camps.

Robert Baryamwesigwa and Fred Kiwanuka, both at the time commandants at the Bidi-Bidi refugee settlement in Yumbe district in the north of the country, were charged this week with demanding and receiving bribes of more than 393m Ugandan shillings (about £82,000).

The alleged bribes were made between 1 June 2016 and 30 December 2017, prior to the award of contracts to two companies – Jinako Engineering Works Ltd and Atlast Engineering Works Ltd – for work at Bidi-Bidi, according to the government inspectorate, a regulatory agency responsible for fighting graft.

Kiwanuka has pleaded not guilty to the charges of corruption and abuse of office. He has not entered a plea on money laundering. Baryamwesigwa has yet to be apprehended. 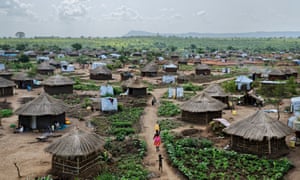 FacebookTwitterPinterest An area of mud-brick houses and tents at the Bidi-Bidi settlement in northern Uganda. Photograph: Ben Curtis/AP

Ali Munira, a spokeswoman for the inspectorate, told the Guardian: “We are still conducting investigations into other allegations … We expect more prosecutions.”

“The war on corruption is on and real. It’s not hearsay. The prosecution is to ensure people are accountable,” said Ecweru.

Thijs Van Laer, programme director at the International Refugee Rights Initiative, said: “While I can’t comment on the charges against these individuals, I do consider it a good sign that senior government officials have been arrested for allegations of corruption. Corruption scandals have negatively affected the refugee response for some time now and, despite many promises, there has so far been limited accountability.

“Such efforts could send a clear signal that corruption is no longer tolerated. And it could also help in restoring trust among key donors, which is urgently needed to reverse the lack of funding for the refugee response.” 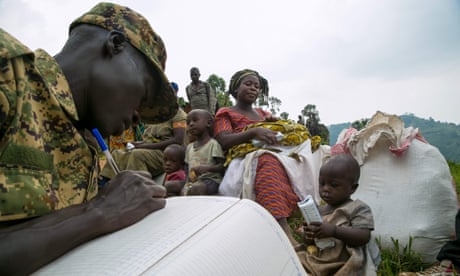 Read more
The UK and Germany have withdrawn aid to refugee operations in Uganda as a result of malpractice unearthed by an internal UN audit.

Apollo Kazungu, commissioner for refugees, and three of his senior staff – Walter Omondi, John Baptist Sentamu and Francis Nkwasibwe – were suspended in February 2018, pending investigations into alleged collusion with staff at the UN refugee agency, the UNHCR, and the World Food Programme to exaggerate refugee figures.

Kazungu and Sentamu are suing the government for failure to reinstate them after more than a year since they were forcefully indicted. According to government standing orders, if no charges have been brought after six months officials should be allowed to resume work.

The four officials are yet to be arraigned and charged in court, while the UNHCR has not announced any action it plans to take against its employees.