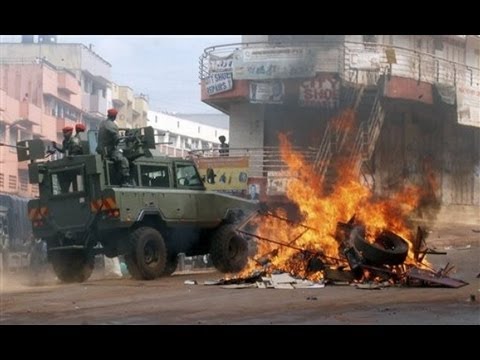 CHANGE OF GUARDS published on Wednesday, 4 May 2016
Operation Wembley is a codename that was given to a countrywide security operation to arrest, detain, torture and arbitrarily execute “armed robbers”.  It was initiated in 2001 as a political response by the Museveni regime amidst  fears that following the rigged election and the persecution of the opposition that ensued, some patriotic Ugandans were contemplating taking up arms to fight the regime.   After the then figurehead IGP, Katumba Wamala refused to oversee it, Museveni appointed then Col. Elly Kayanja who had been on Katebe as the Commander of Operation Wembley assisted by among others ASP Magara, Godfrey Musana, Bageya, Col. Tusiime and a couple of city armed robbers like Kawere, Kiwana and others.  With secret torture chambers at Clement Hill road behind the MTN head office in the heart of Kampala that later shifted to Kireka army barracks, regional branches in all parts of the country except Karamoja, hell broke loose in Uganda.The regime’s fear was based on it is own experience during during its own 1981-1986 Bush War rebellion against the UPC government whereby those who had been notorious armed robbers had proved to be vital assets.   In 2001 Museveni feared that such people could boost the opposition if it had opted to take up arms.  Operation Wembley wrecked havoc by arresting, torturing, maiming, arbitrarily killing, stealing and extorting from suspects etc.  A special military court was hastily constituted with Gen. Tumwine as its Chairman.  The special court was not for trying the suspects but just to legitimize the detention without trial and that’s why no single Operation Wembley suspect was ever accorded a full trial.

Also, this was so because of the fear that a full public trial would reveal the horrific ordeal that the victims had endured at the hands of the security goons.  More so, a full trial would link the army as  the source of arms, ammunition and military uniforms owing to its poor control and safe storage of those lethal equipment that fell into wrong hands.  Moreover, almost 95% of the suspects were army deserters, militias and those who the army had taken through paramilitary training.   It was after the local and international human rights organisations raised a red flag over the carnage that was being netted out by Operation Wembley operatives that  the operation was renamed Violent Crime Crack Unit (VCCU).  Later it became Rapid Response Unit (RRU) and now it is Flying Squad but the mission and method of operation is the original one.

Following the February 2016 rigged sham elections  where as had been expected Museveni was once again announced the winner, the opposition and other pro change Ugandans have been threatening not to recognise Museveni’s victory through a campaign dubbed ‘Defiance’.  As had been the case in 2001, Museveni’s security machinery is in full swing arresting, detaining and shooting dead unemployed urban youth under the guise of fighting criminality.  The aim is to deplete urban centres of such youth in order to deny the pro change Ugandans the numbers in the even of street protests.  The regime is very worried and panicky over the impending defiance protests.  The so called urban criminal gangs have been proven beyond doubt to be in league with Museveni’s security machinery in order to justify the presence of soldiers on the streets and the ensuing crackdown.