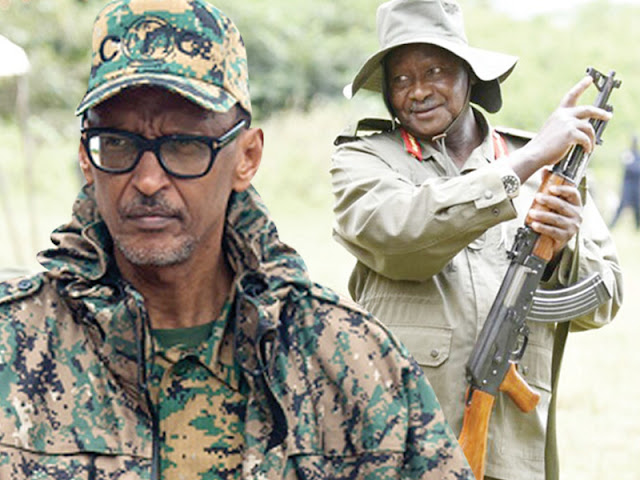 “The initial story we had been told was that these people were arrested because they are spies. Meaning Rwanda is interested in knowing things in Uganda. Of course the implication is Uganda is not interested in knowing things in Rwanda. That spying is one way.  I have not known history that tells me we have that situation happening one way, if it were to be true.”
Kagame – addressing a press conference

A few days after that press conference, two Ugandans were shot dead inside Rwanda close to the common border.  Rwanda claimed that the two were shot in self defense as they attempted to attack the armed police border patrol squads. Uganda has initiated a diplomatic Protest Note to the Rwanda Embassy.

Amidst the shooting controversy, Museveni dispatched his military team to the Rwanda border region of South Western Uganda to mobilize the so-called non existent Army Reservists.  The choice of focusing on the South Western region is designed to send a message to Rwanda.  The composition of his team which included the head of his communist Indoctrination Institute at Kyankwanzi, Brig. Kasura is also suspect.  Here below, we reproduce the press release that was issued by the Army Spokesman:

Deo Akiiki
9th Nov 2019
MOBILIZATION AND DOCUMENTATION OF RESERVE FORCES IN WESTERN UGANDA KICKS OFF
The General Officer Commanding Reserve Forces of the Uganda Peoples’ Defence Forces (UPDF), Lt. Gen. Charles Otema Awany on 8th November 2019 launched a mobilization and documentation exercise of Reserve Forces in South Western Uganda. The function was held at Lake View Hotel Regency in Mbarara.  Lt Gen Otema said the documentation exercise is aimed at building the Reserve Forces into a fully established Service of the UPDF and enhancing the Service’s capability to contribute towards maintenance of peace in the country.  “We recognise our Reserve Forces as valuable players in maintenance of peace and security in the country” he said.  He said those being documented are UPDF veterans, current and former auxiliary Forces that include former Local Defence Unit personnel who supported the UPDF during operations against Allied Democratic Forces (ADF).

Speaking at the function, the Director of the National Leadership Institute, Brig. Gen. David Kasura Kyomukama stressed the significance of local input in the maintenance of security.  “Players such as the wanainch and local leaders at all levels are key contributors to the foundation of security if they are effectively coordinated by the Security Forces,” Brig Gen Kasura said, adding that although it is the duty of the state to protect the citizenry and not the citizens protecting the state, security is a collective responsibility.  He applauded those supporting security agencies in securing the country such as former Crime Preventers and urged them to always exercise professionalism and diligence in the conduct of their assignments.  The Resident District Commissioner (RDC) of Mbarara, Lt. Col. James Mwesigye applauded the UPDF for the move to document the Reservists saying that the exercise will not only enhance Command and Control of the Reserve Forces but also facilitate the processing of the benefits of the veterans.

Otherwise, who will issue a Protest Note for Ugandans who are shot dead in cold blood on a daily basis by Museveni’s army both on land and water?