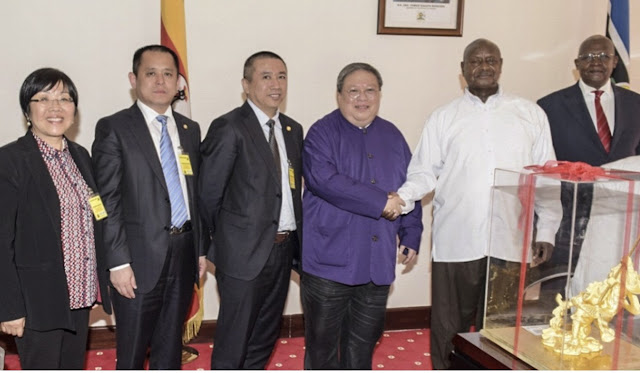 Sometimes, one has to wonder what possesses Ugandan journalists, activists and even government to comment about such rubbish as “Uganda sides with China”?  That is how your reputation tanks. DIGITAL FOOTPRINT.

Listen you people, Uganda has no voice. ZERO, ZILTCH voice when it comes to International Affairs and most not even China and Hong Kong protests.  The world is watching Military Dictator Yoweri Museveni suppressing opposition, dissenters, activists, media and whoever is also unlucky to horrific Human Rights Abuses.  Then he gonna comment on Hong Kong.  Pass me a joint.

However, you as a journalist, an activist, an elite, a yIntelleketcho go on Twitter and say “The government letter was maybe good for all of Uganda’s allies like Britain to now speak on behalf of China against Hong Kong protests”.  Aya baasi.  This is the point where I usually ask people “Your degree comes with a refund and exchange, right?  Because you need to shred the one you are holding.

Ho Schemed to Bribe the President of Chad, President and Foreign Minister of Uganda
Geoffrey S. Berman, United States Attorney for the Southern District of New York, and Assistant Attorney General Brian A. Benczkowski of the Justice Department’s Criminal Division announced that CHI PING PATRICK HO, a/k/a “Patrick C.P. Ho,” a/k/a “He Zhiping,” was found guilty today after a jury trial before U.S. District Judge Loretta A. Preska of participating in a multi-year, multimillion-dollar scheme to bribe top officials of Chad and Uganda in exchange for business advantages for CEFC China Energy Company Limited (“CEFC China”).  HO was convicted of violations of the Foreign Corrupt Practices Act (“FCPA”), international money laundering, and conspiracy to commit both.  HO is scheduled to be sentenced before Judge Preska on March 14, 2019, at 10:00 a.m.

Manhattan U.S. Attorney Geoffrey S. Berman said:  “Patrick Ho now stands convicted of scheming to pay millions in bribes to foreign leaders in Chad and Uganda, all as part of his efforts to corruptly secure unfair business advantages for a multibillion-dollar Chinese energy company.  As the jury’s verdict makes clear, Ho’s repeated attempts to corrupt foreign leaders were not business as usual, but criminal efforts to undermine the fairness of international markets and erode the public’s faith in its leaders.”

Assistant Attorney General Brian A. Benczkowski:  “Patrick Ho paid millions of dollars in bribes to the leaders of two African countries to secure contracts for a Chinese conglomerate.  Today’s trial conviction demonstrates the Criminal Division’s commitment to prosecuting those who seek to utilize our financial system to secure unfair competition advantages through corruption and bribery.”

According to the Indictment, evidence presented at trial, and other public proceedings in the case:

HO was involved in two bribery schemes to pay top officials of Chad and Uganda in exchange for business advantages for CEFC China, a Shanghai-based multibillion-dollar conglomerate that operates internationally in multiple sectors, including oil, gas, and banking.  At the center of both schemes was HO, the head of a non-governmental organization based in Hong Kong and Arlington, Virginia, the China Energy Fund Committee (the “CEFC NGO”), which held “Special Consultative Status” with the United Nations (“UN”) Economic and Social Council.  CEFC NGO was funded by CEFC China.

In the first scheme (the “Chad Scheme”), HO, on behalf of CEFC China, offered a $2 million cash bribe, hidden within gift boxes, to Idriss Déby, the President of Chad, in an effort to obtain valuable oil rights from the Chadian government.  In the second scheme (the “Uganda Scheme”), HO caused a $500,000 bribe to be paid, via wires transmitted through New York, New York, to an account designated by Sam Kutesa, the Minister of Foreign Affairs of Uganda, who had recently completed his term as the President of the UN General Assembly.  HO also schemed to pay a $500,000 cash bribe to Yoweri Museveni, the President of Uganda, and offered to provide both Kutesa and Museveni with additional corrupt benefits by “partnering” with them in future joint ventures in Uganda.

The Chad Scheme began in or about September 2014 when HO flew into New York, New York to attend the annual UN General Assembly.  At that time, CEFC China was working to expand its operations to Chad and wanted to meet with President Déby as quickly as possible.  Through a connection, HO was introduced to Cheikh Gadio, the former Minister of Foreign Affairs of Senegal, who had a personal relationship with President Déby.  HO and Gadio met at CEFC China’s suite at Trump World Tower in midtown Manhattan, where HO enlisted Gadio to assist CEFC China in obtaining access to President Déby.

To the surprise of HO and the CEFC China executives, President Déby rejected the $2 million bribe offer.  HO subsequently drafted a letter to President Déby claiming that the cash had been intended as a donation to Chad.  Ultimately, HO and CEFC China did not obtain the unfair advantage that they had sought through the bribe offer, and by mid-2015, HO had turned his attention to a different “gateway to Africa”: Uganda.

The Uganda Scheme began around the same time as the Chad Scheme, when HO was in New York, New York for the annual UN General Assembly.  HO met with Sam Kutesa, who had recently begun his term as the 69th President of the UN General Assembly (“PGA”).  HO, purporting to act on behalf of CEFC NGO, met with Kutesa and began to cultivate a relationship with him.  During the year that Kutesa served as PGA, HO and Kutesa discussed a “strategic partnership” between Uganda and CEFC China for various business ventures, to be formed once Kutesa completed his term as PGA and returned to Uganda.

In or about February 2016 – after Kutesa had returned to Uganda and resumed his role as Foreign Minister, and Yoweri Museveni (Kutesa’s relative) had been reelected as the President of Uganda – Kutesa solicited a payment from HO, purportedly for a charitable foundation that Kutesa wished to launch.  HO agreed to provide the requested payment, but simultaneously requested, on behalf of CEFC China, an invitation to Museveni’s inauguration, business meetings with President Museveni and other high-level Ugandan officials, and a list of specific business projects in Uganda that CEFC China could participate in.

In May 2016, HO and CEFC China executives traveled to Uganda.  Prior to departing, HO caused the CEFC NGO to wire $500,000 to the account provided by Kutesa in the name of the so-called “foundation,” which wire was transmitted through banks in New York, New York.  HO also advised his boss, the Chairman of CEFC China, to provide $500,000 in cash to President Museveni, ostensibly as a campaign donation, even though Museveni had already been reelected.  HO intended these payments as bribes to influence Kutesa and Museveni to use their official power to steer business advantages to CEFC China.

HO and CEFC China executives attended President Museveni’s inauguration and obtained business meetings in Uganda with President Museveni and top Ugandan officials, including at the Department of Energy and Mineral Resources.  After the trip, HO requested that Kutesa and Museveni assist CEFC China in acquiring a Ugandan bank, as an initial step before pursuing additional ventures in Uganda.  HO also explicitly offered to “partner” with Kutesa and Museveni and/or their “family businesses,” making clear that both officials would share in CEFC China’s future profits.  In exchange for the bribes offered and paid by HO, Kutesa thereafter steered a bank acquisition opportunity to CEFC China.

The maximum potential sentences in this case are prescribed by Congress and are provided here for informational purposes only, as the sentencing of HO will be determined by the judge.

This case is being prosecuted by the Office’s Public Corruption Unit and the Criminal Division’s Fraud Section, FCPA Unit.  Assistant U.S. Attorneys Douglas S. Zolkind, Daniel C. Richenthal, and Catherine E. Ghosh, and Trial Attorney Paul A. Hayden of the Fraud Section, are in charge of the prosecution. 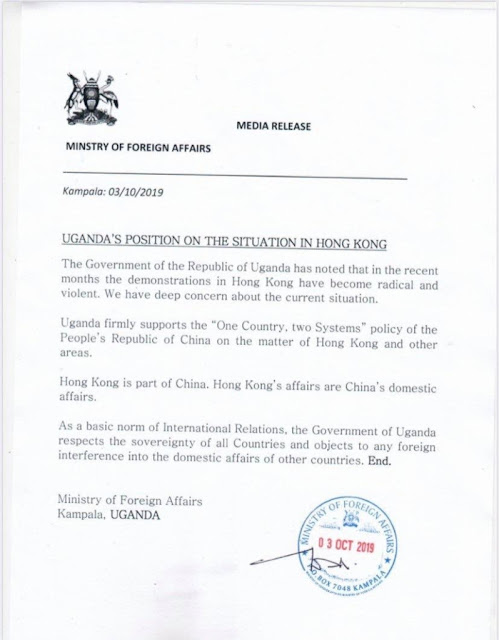 « Check it out now (To God be the glory) Lyrics (Previous News)
(Next News) Wikipedia’s Article of the Day October 7, 2019: Poitevin horse »