UGANDA: Museveni celebrated Independence Day in Sironko – like he did in Luwero 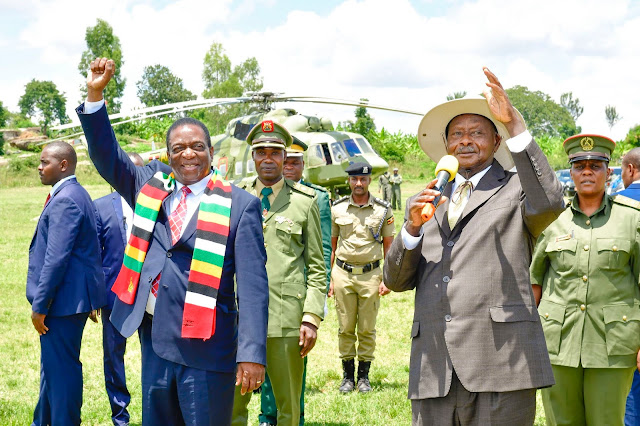 Military Dictator President Yoweri Museveni dances on the graves of the people he killed.

More than 100 bodies recovered after massive landslides in …
www.cnn.com › WORLD › africa › uganda.landslide
Mar 2, 2010 – Fresh earth is exposed after massive landslides Monday night in Uganda. … In the meantime, the bodies recovered will be buried in mass graves … in the neighboring districts of Sironko and Bukwa — also located on the …
Government abandons search, mudslide victims, mass grave …

https://ift.tt/35tbe6Y › News › National
Sep 10, 2017 – Sironko. A mass grave has been declared at the scene of landslide in Sironko, following government’s failure to exhume missing persons …
Here is something my team wrote more than 3yrs ago.

Wednesday, 24 July 2013
KANYARYERU- MUSEVENI’S SECTERIANISM ON DISPLAY.
Recently during one of his counter insurgency operations, Museveni visited Kanyaryeru Sub-county to mobilize the war Veterans there.
He arrogantly stated that the war veterans of Kanyaryeru were financialy empowered because they embrassed development projects. He further said that Kanyaryeru sub county was part of the Luwero Triangle that had been transplanted into his home district of Kiruhura. Further more he said that the people Kanyaryeru gave their cows to his NRA during his guerrilla war and he advised them to move away from the war Zone to safer areas.

The truth is that the so called war veterans of Kanyaryeru are the Hima and Rwandese Tutsi pastrolists (Balaalo) who were residing in parts of Luwero during his guerilla war. They helped alot with the preliminary survey or reconnaissance of the area, wellcomed the guerillas, gave them shelter, gathered intelligence etc. No doubt, during the guerilla war the fighters who were predominantly ethinic Ankoles trusted these Balalos more than the Baganda. This is because while there was no Mulalo who could be a member of then ruling Uganda Peoples Congress (UPC), many Baganda were members of UPC . Save for very very few, like Major Herbert Murombe, it war rare to find a Mulalo in the UNLA fighting agains NRA. Many Baganda Commanders like Kiyengo gave Museveni’s NRA a blody nose. No Mulalo could be a youth winger but many Baganda youths in Luwero were. Under the patronage of the able UPC Chairman of Luwero, Haji Sebirumbi the youth wingers and the lower UPC party leaders realy gave Museveni’s NRA real hard time and were refered to as Bipingamizi. When captured they were summarily executed the Kafuni style. Their skulls and skelletons are also part of those on display by Museveni as victims of killings by Obote’s soldiers. As to why its only Haji Sebirumbi who was charged and executed for killings, is a matter for another discussion.

In the Luwero Triangle the Balalo had cows and no anyother tangible property. They used to supply milk and meat to the guerilla fighters.When the situation got worse they handed over their only wealth to the guerillas and in return they were issued with promisory notes. Kahinda Otafiire led the team that received the cows. When the times became tougher they were securely evacuated and protection behind the NRA guerillas. The able bodid men became part of the NRA. That is why there are neither entire families wiped out nor mass graves for Balolos in Luwero.

The Baganda peasants on the other hand owned land, houses, coffee and food crop plantations. Luwero was Kampala’s food basket. They were targeted by both the government army and the NRA guerillas. Some were secured by the UPC government and aid agencies while others found their way to safety in Kampala city. They left their food in the farms and domestic animals to be fed on by the NRA without issuance of promisory notes.

Later the NRA guerillas escorted many Balalo civilians out of the Luwero Triangle. When Museveni took over power, one of his earliest success programes was to resettle the Balalos. A huge portion of Lake Mburo National park had to be degazetted to curve out that Kanyaryeru settlement for those Balalos. Others benefited from the Ranches Restructuring Programe. Goverment funds were availed to compesate them for their cows. A modern secondary school named Ngabo Academy was constructed to cater for the education of Balaalo War veterans and Capt Bashaija is the permament Director. Gen. Saleh graduated from this academy. A scholaship fund for the war veterans was set up under state house and managed by Canon Rubunda. Many of the beneficiaries are some of the successful young men you seen in powerful positions in URA, State House, Presidential Guards etc.

For 27 years the Baganda war Veterans of Luwero are yet to be recognised and rehabilitated. Not even the Girls secondary school of Masulita whose girls Museveni guerillas turned into sex slaves has be reconstructed.

Thanks to the current threat of rebellion, Luwero may reep.