UGANDA: MPs set their own salaries and bleed the economy 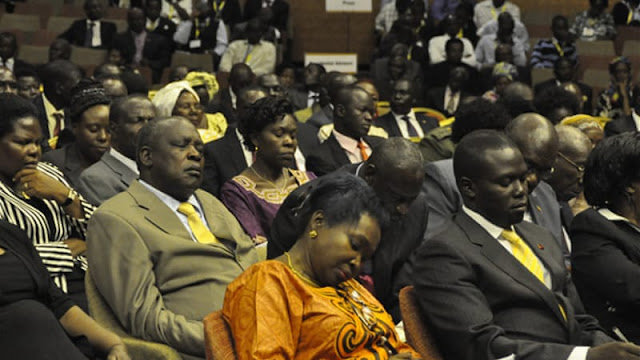 In Uganda, members of the parliament decide their own pay, even as debate over whether or not the constitution allows them to do so continues. But not all government employees receive the same benefits – so civil society organizations are calling for more oversight.

Robinah Nabbanja, a current MP, is part of a committee charged with determining the allowances that parliamentarians receive. She says the committee plans to approve an increase in their monthly fuel allowance, from 3,200 shillings ($0.86) to 4,000 shillings ($1.08).

The last time MPs received a fuel allowance increase was in 2011, she says. This increase is intended to account for inflation.

But civil society organizations under the umbrella body Civil Society Budget Advocacy Group (CSBAG) are protesting the increasing benefits that MPs allot themselves, saying that other civil servants in Uganda, who are similarly impacted by inflation don’t receive the same perks that MPs do.

There is some dispute over whether the Ugandan constitution formally allows MPs to determine their own salaries.

In addition to a desktop computer and iPad, MPs receive a number of financial allowances, including 60 million shillings ($16,190) in funeral allowances for when they die and a gratuity allowance of about 40.2 million shillings ($10,860), along with $520 dollars per day when traveling abroad and $40 dollars per day when they travel within the country, says Chris Obore, director of communications and public affairs for the Parliament of Uganda.

Joseph Ngobi Ngabo, principal communications officer at the Ministry of Public Service, says salaries and benefits increases have not been made for other public servants since 2008, with the exception of scientists who received a raise last year.

Parliament’s current ability to set its own salaries and benefits is the root of corruption and public apathy, says Christine Byiringiro, governance program officer for Uganda Debt Network, a local NGO.

“Every time MPs increase their pay it causes public apathy. But citizens should get up and oppose these increments,” she says, adding that an independent body should determine salaries and benefits for MPs.

Byiringiro feels other public servants should also be given increments since they are subjected to the same market prices.

“They seem more like they represent themselves. Other public servants will also face similar fuel increments such as doctors, teachers,” she says. “Shouldn’t they also increase their allowances?” She quizzes.

Obore acknowledges the controversy, but adds that MPs have made many other budget increases for public services, like maternal health in 2011.

Still, there is rising anger here as news of the budget increases is now widespread.

Kagaba says she is encouraging people to protest against these increases.

“We are going to document these things and use them as a campaign issue. We need to call them to order,” she says. “If Parliament closed for three months nothing would happen, but if doctors put down their tools for five minutes, lives will be lost.”

Did you find apk for android? You can find new Free Android Games and apps.
Sharing is caring:
museveni, corruption, graft, politics, UGANDA Uganda, Museveni, Corruption, Graft, Politics Comments Off on UGANDA: MPs set their own salaries and bleed the economy Print this News