UGANDA: More families evicted from their land in Mubende 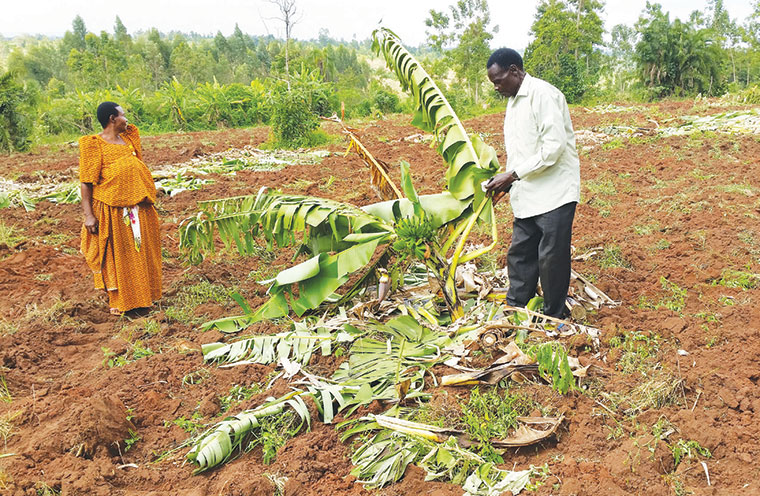 In 2014, Francis Lubyaayi retired after serving many years as head teacher of various primary schools in Mubende.

As he walked out of Kigamba primary school in Kasambya subcounty – his last duty station, Lubyaayi had his sights set on his 8.5-acre piece of land at Kijaki village in Mubende town council. In retirement, he hoped to eke out a living by farming.

That was only three years before a one George Kaweesi developed interest in a 322.5 hectare piece of land covering the villages of Kambuye, Kanseera, Kikomo, Kyabaana, Lwensanga and part of Kijaki in Mubende municipality’s East division.

Since October last year, Kaweesi has been evicting people from these villages – some without any compensation. Those he has compensated, the rates are based on his own valuations. At the beginning, Lubyaayi was unbothered, thinking that his land lay outside Kaweesi’s area of interest until early this month when Kaweesi’s agents made new acquisitions and left him with about an acre.

On June 13, Kaweesi’s men returned with a tractor and razed Lubyaayi’s banana and coffee plantations before continuing to another piece owned by 70-year-old Peragia Nabaggala.

“Why is government so protective of foreigners? I am a Ugandan, I have been living here for more than 25 years but I find it surprising that someone comes from nowhere and gets the support of the authorities to evict us,” Lubyaayi said.

This newspaper recently highlighted how Kaweesi was enjoying the backing of some authorities in police to evict people. (See: Hope fades for Mubende land eviction victims, The Observer, March 13).

After Kaweesi’s men descended on his mother’s plantations, John Ssettimba sought the intervention of Francis Kibuuka Amooti who wrote to District Police Commander (DPC) Martin Okoyo to stop the evictions. According to Ssettimba, Okoyo doubted his narrative and promised to send cops to assess the situation. Two days later when this writer visited, the police had not gone to the affected villages.

Okoyo was not in office but the Wamala region police spokesman Norbert Ochom told NTV on Monday that they have so far arrested four people including Kaweesi’s manager and a security guard.

Mistrust for the police among locals is growing. Many doubt the arrested people will stay in custody for long.

“When Kaweesi was beginning the evictions, police sided with him and instead arrested our local leaders who opposed the evictions. Kaweesi’s men who maimed us were briefly detained and released without charge,” Grace Nansubuga said.

Nansubuga had her four buildings razed to the ground as his seven-acre plantation plus a piggery and poultry projects were mercilessly destroyed by Kaweesi’s henchmen.

“For all the investments I had on the land, Kaweesi was giving me Shs 3 million in compensation; I refused to take it and demanded that we get a professional valuer to do the valuations but he refused,” Nansubuga said.

In a phone interview on Tuesday, Kaweesi said he did not recognize the alleged evictees as tenants on the land before telling this writer, “I don’t have any interest in your story; if I were interested, I would have looked for you.”

“Good thing is that the case is before court, go and ask the court people to tell you what you want to know,” he added before hanging up.

The resident district commissioner Mary Baguma Nyakwera, told The Observer on Tuesday that she had instructed the police to arrest Kaweesi and his agents and so far, six people are in police custody.

“The challenge we have now is that we are stuck with the file because the victims are not coming to police to record statements,” Nyakwera said.

“These are legal occupants of the land, they have to be protected but there is no way we can do it if they are keeping away from us,” she added.