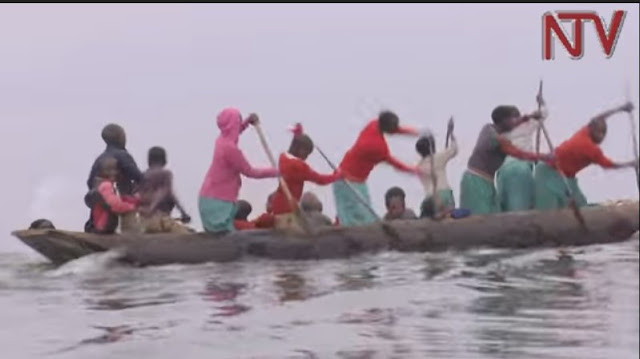 In 2018, one of my friends via Social Media, contacted me.  He said something Tupid like kids from his community have to take canoes in Lake Bunyonyi area to go to school.

I asked him, do the kids know how to swim.  He said the majority do not know.

Then I asked him, do the kids have life jackets. He said, they did not.  However, his team was raising money to buy a life jacket for each kid.  I sent in my share. One kid at least.

Imagine my shock when another friend texts me when he is on Dowve Island. ..Buddy, what are you doing there… He replies..trying to pipe water for the school on the island.  Some kids have been eaten by Crocs… Of course, being the super Problem Solver that I am, thank you Jesus…I asked buddy, why are you piping water from Lake Vic instead of just drilling a well by the school and then piping water.  Seemed like common sense till he told me that place is all rock and nothing.

On Dowve island, we have pupils going to the Lake daily to fetch water. Occassionally, some crocodiles feel like eating a child.  THIS IS WHAT WE CALL #SteadyDevelopment.

Back to my friend from Bunyonyi, his team is now building a secondary school for his community.  He has pledged a lot of money to help. I did not pledge any but once the school thing shapes up, I will be a monthly contributor.

One thing with NGOs, you have to show what you are doing as a person, founder, director…before others join you.

It would be wonderful to see all children around the world access quality education. Clean water. Not be eaten by Crocs. Not drown while trecking across lakes on home made canoes. Not hungry because we have enough food. Not worried about the future because we must plan for them. Not be forced into early marriages (girls) or human trafficking nor sex trade nor slavery.

It is about time that all of us as parents, leaders, educators, teachers, it is about time that we return the conversation to the child.  What can we do for the child now… What can we do to ensure the child is safe and a community contributor down the road.  Do you think that children drowning off capsized canoes crossing lakes to attend school is what we can accept… OR to watch the injustice on the child and not expect the child to become a mean person down the road… OR that the child should just be eaten by a croc because we do not care to bring drinking water to their dormitory.

The amount of work is immense. We can do it. We just need to refocus. Focus on the future of this generation and the generations that follow.