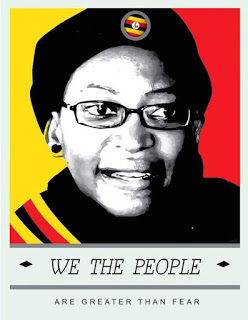 My dearest sister Dr. Stella Nyanzi, I want to update you on the happenings in country code 256.

Since my last letter to you last week, we have had some big things. Good and bad.

1. VP Ssekandis is still him in his job but lately,he has taken to being a Choir Director for some born church
He was even video taped dancing yesterday
It was some Anglican hymn andthe man was dancing
Ensi eno!!

2. Tamale Mirundi is still in Kisubi Hospital suffering from only the Good Lord knows what. Bobi Wine visted. Murundi will be back soon yelling “Me, TamaleMirundi, I am President Yoweri Museveni’s barking dog. Naye waliwo ba Mafia in Statehouse who poisoned me. Ngenda okubasamba n’ebyenda mbiyiwe. Aggabbi mwe!!”

4. The EAC is dead and buried. You should see the threats among them. Kenya, Uganda, Rwanda. Leave DRC alone. Congo has their own issues mbu ADFiskilling Congolese in the Kivu mineral rich region. I think they still have Ebola.

5. The kidnaps, vanishings and killings continue unabated. It is almost like Ugandans have become cannibals. You should see the rate of daily murders.Oh, we also still have the road carnage. Mama if you read how many are dying in road accidents.

6. Your employer Makerere University is going ahead with the15% tuition increase.

7. The Slave Trade is booming more. Apparently some slaves are returning dead with missing organs.

8. Bobi Wine got permission for nationwide consultations. He is aready being framed and blackmailed.

9. Uganda court issued an arrest warranty for Al-Bashir.  Like serioulsy??  Talking of the devil, Sudan court sentenced Bashir to 2yrs in jail. Apparently for treason for the 1989 coup which brought him into power.

10. Kiir and Machar are the usual jokers.

11. Dr. Pombe announced he will not run for a third tirm thus: “There are many qualified people in CCM,Idonotneedtoremaintheirleader”.  WANJI!!

12. President Donald Trump got impeached. Next stop is the Senate which ofcoursewill cancel the impeachment.

13. President Emmanuel is in some kind of picke.

14. Hong Kong is self destructing.

15. Myanmar is at The Hague. You can thank Gambia for this one.

16. Climate change is no longer a joke. All EAC countries are experiencing floods and landslides. Today, the Uganda govt announced that they will not dig for the dead in Bududa. Consequently, a Mass Grave is beingdeclared in Bududa (Bushika) for the 22bodies buried under debris.

MARTHA LEAH NANGALAMA
*** How I wish you could spend this Xmas with your kids.