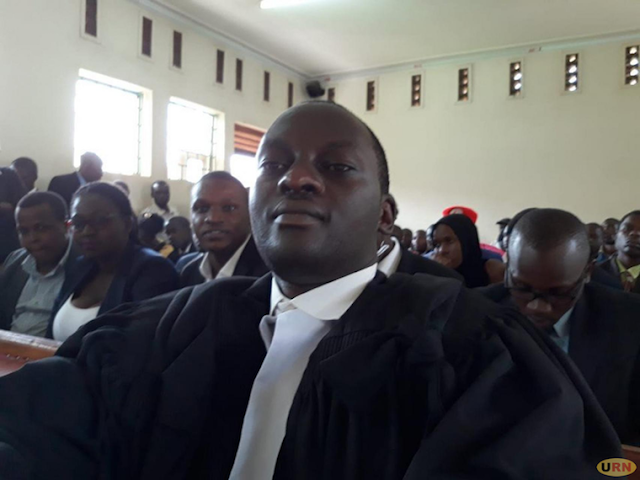 MARTHA LEAH NANGALAMA –  The Uganda Law Society (ULS) is an embarrassment.  Here they are telling one of their own to pull down a Facebook post which told truth.  Now, are we to think that ULS sanctions land grabbing and impunity?

ULS sits comfortably waiting to pounce on none issues.  Where have they been on the multitudes of Moslems who languish in jail and face daily persecution?

Has ULS fought against the POMB and banning of opposition in this government?

Has ULS fought against the ongoing #SlaveTrade?  What about the continued deprivation of native Ugandans for the benefit of refugees and other foreigners?

Has ULS ever acted on ensuring that the electoral reforms are put in place before the next election of 2021 or 2023 depending on the outcome of the recent State House meeting?

When the fake HepB vaccine was given to 3mln Ugandans, did ULS do anything about it?  Do you know what the implications of vaccinating 3mln people with a fake vaccine are?  Future deaths (likely) and major lawsuits.

When Makerere University was shut down for 2+ months, did ULS do anything about it?

One of the biggest problems in Uganda is highly educated people who are totally useless.

ULS has too many idiots.  They should fire themselves. We are used to their being useless so please spare us our time.  Twakoowa dda!  == You can take that to the bank.
=====

A human rights lawyer and activist, Eron Kiiza has come under fire for allegedly writing offensive Facebook posts against the Mubende resident judge, Joseph Murangira.
Uganda Law Society (ULS) a body charged with ensuring high levels of professionalism among lawyers, has asked him to ‘withdraw’ the posts.

Simon Peter Kinobe, the ULS president, says his attention has been drawn to a sustained social media campaign accusing and attacking the person of justice Murangira and the manner in, which he handled a land matter before him in Mubende.

The said posts are in respect to an on matter registered as miscellaneous cause number 11 of 2019 Ssematimba John and 23 others Vs Kaweesi George and others at Mubende High court.

“In the said posts, you expressly and by innuendo refer to the presiding judge; Justice Joseph Murangira as a “Mafia” a member of “the troublesome trio” and also attach multifarious photos of the learned judge clad in judicial robes. You accuse him of “mishandling the case”, playing games and being “in bed with tormentors” and “biased’’ among others,” Kinobe states in his July 17 letter to Kiiza.

According to Kinobe, advocates, by the virtue of their appointment are officials of the court and should espouse, protect and uphold the principle of fair hearing enshrined under Article 28 of the Constitution of Uganda, which requires that a person shouldn’t be condemned unheard.

“By using social media to attack a judicial officer, you violate this rule and deny the judge an opportunity to be heard,” Kinobe says. Adding that; “Comments in the media by an advocate in personal conduct are of a matter contrary to the advocates (professional) conduct regulations and in this particular case border criminality.”

Justice Joseph Murangira
Kinobe notes that there are alternative avenues to handle errant judges in case they are found to have bias and or unbecoming conduct. The avenues, according to Kinobe, include raising complaints through the principal judge, chief justice or the Judicial Service Commission, the body that is legally mandated to deal with errant officers.
In his July 18 response to Kinobe, Kiiza denies posting any innuendos, saying that he is a human rights lawyer who has advocated for it for a long time.

“Social media is not inconsistent with Article 28 of the 1995 Uganda Constitution. If it were so, you would certainly not have judicial officers with social media accounts,” Kiiza says.
Adding that; “Social media gives life and meaning to freedom. …I am sure that contrary to your suggestions, I committed no crime in using social media to give voice to the problems of the people of Mubende evicted from five villages.”

In his three-page response coloured with poetic language, Kiiza notes that while lawyers “must water the gardens of judicial independence”, that must not blind them into shielding themselves and the public from the necessity of a war on judicial impunity.

“A burning house of advocates. The greatest house of an advocate is freedom. More so, the freedom of one’s mouth. When padlocks, however disguised, hail from the person or the office of the ULS president, danger lurks,” Kiiza notes.

According to Kiiza, the ULS president did not, in his letter specify any rules he had violated, but seemed to move to silence him.

“I had hoped, that the weight of your office and the spirit of your letter would give voice, even in one word, to the plight, pain and puzzle of the thousands of evictees whose unfathomable pain and violation have left me with no choice but to ventilate it through my Facebook account besides other for a,” Kiiza states.
Adding that; “Are you similarly irked by people who praise judges on social media or it is those who criticize them on social media that rub you the wrong way? Social media hymns of praise for our judges must accommodate interludes of criticism. Love poems should be juxtaposed with freedom songs in our digital interactions with the bench.”

Earlier this month, the chief justice Bart Katureebe tasked justice Murangira to respond to allegations of bias leveled against him in a July 4 petition by more than 3000 people evicted from their homes in Mubende district.

UGANDA: Land Grabbing did not start with @KagutaMuseveni

UGANDA: Land Grabbing did not start with @KagutaMuseveni