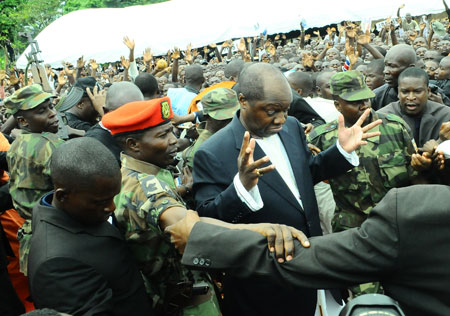 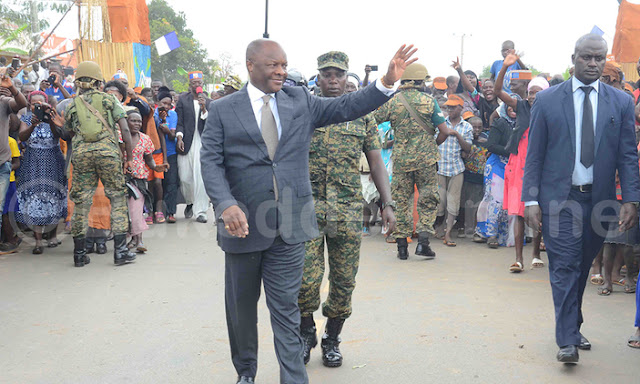 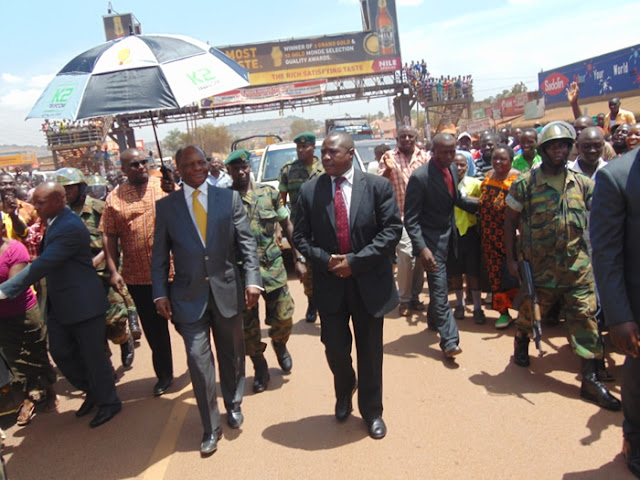 Four years after Uganda’s independence, in 1966 the power struggle between the central government and Buganda Kingdom culminated into a bloody armed clash.  The central government sent its troops who clashed with the Kabaka’s loyalists at the palace.  Buganda Kingdom has been allowed the leverage of retaining its traditional army and police on top of having its own guns.  After some bloody clash, the central government army overran the palace leaving the Kabaka to escape into exile.  The then Prime Minister, Dr. Milton Obote told Parliament on May 24, 1966:
“It is my duty to inform the House that there has been an open declaration of rebellion by Buganda Lukiiko and by Sir Edward Mutesa.
The government is in possession of documentary evidence that Sir Edward Mutesa had already decided by April 12, 1966 to mount a full-scale rebellion against the authority of the Government of Uganda….”

In 1968, kingdoms were abolished and a few years later the Kabaka died in exile.  These developments culminated into the deep-seated hatred by a big section of the Baganda against Milton Obote.  It is this hatred that Museveni exploited when he embarked on his sectarian Bush War on Buganda soil in 1981.  In return for support,  he promised the restoration of the kingdom once he would get into power.  Over two decades later, Museveni pleaded with the Kabaka:
“Your Highness, you may remember that when I met you in London in 1981, at the late Prof (Yusuf) Lule’s house, I told you that the traditional institutions in Uganda could be restored if the people concerned so wished…..”

When then Prince Ronald Mutebi returned to Uganda, Museveni deployed his North Korea trained spies from DMI to handle the Prince’s security detail.  For the next 8 years as Museveni was still dillydallying over restoration of Buganda Kingdom, these spies kept Museveni informed about the Prince’s movements mm and engagements.  In the meantime, Museveni was maneuvering with curbing the influence of the Buganda in the army.  In 1993, Museveni used the  Army Council to restore the Buganda Kingdom and Prince Mutebi ascended to the throne as the Kabaka.  Immediately after, Buganda Kingdom embarked on the demand for a federal status.

The initial visible signs of a Museveni – Buganda fallout was during the Constituent Assembly when Buganda’s demand for federalism was treacherously plucked out of the 1995 Constitution.  Three years later Museveni enacted the Land Act that was seen by the Buganda Kingdom as targeting its land. The simmering relations continued and Museveni’s spies in the form of bodyguards kept the government informed.  In April 2002 the Kabaka expressed discomfort with the military guards assigned to him.  At a meeting with Museveni, the Kingdom was allowed to recruit Baganda youth for the Kabaka Protection Unit (KPU); who were vetted by elders, trained by the army and its supervision placed under the police.

After duping the Kabaka, supervision of KPU reverted back to the army.  The Permanent Secretary in the Ministry of Internal Affairs wrote to  Buganda Kingdom:
“Having been trained by the army, those providing protection for [the Kabaka] will be supervised under the [UPDF] Act….. At a later date, the protection personnel will be transferred to the Uganda Police Force when [it] will be ready to receive them.”

In 2007 Museveni initiated an amendment of the Land Act and Buganda countered it by sanctioning a sensitization campaign for its citizens.  In July 2008 three Buganda Kingdom Ministers (Mayiga, Ssegona and Namboze) who had been spearheading the campaign were violently kidnapped by the army, flown in a helicopter and detained in different places in the country.  Tension between Museveni and Buganda Kingdom reached its boiling point in September 2009.  For flimsy reasons, Museveni decreed that the Kabaka could not visit his county of Bugerere.  Buganda Kingdom defiantly went ahead with the plans for the visit.

Without prior notice and explanation, Museveni simply withdrew the Kabaka’s guards and replaced them with Military Police personnel.  Buganda Kingdom made a public announcement rejecting the replacement of his guards.  It went ahead to declare its intention to creating a security unit armed with spears and bows for the Kabaka.  Three days later, on September 10th the Katikiro (Prime Minister) of Buganda was blocked in Kayunga as he attempted to enter Bugerere ahead of the Kabaka’s scheduled visit.  Upon hearing the news, Buganda Kingdom subjects reacted violently.  They clashed with Museveni’s security forces for three days leaving 27 people dead.
Amidst the crisis, Museveni accused Buganda Kingdom of treason:
“I also got information that Mengo elements got foreign funds to further their aims of fighting the NRM and undermining the Constitution… I encourage my friend, His Highness Kabaka Mutebi, to distance himself from the Judases,” said Mr. Museveni in his address to the nation on September 10, 2009.
The Kingdom radio station (CBS FM) was forcefully closed by the central government for the next one year.  Buganda Kingdom banned all central government officials from its public functions.

The souring relationship negatively affected the Kabaka’s security detail.  Buganda Kingdom and the Kabaka viewed the security guards as Museveni’s spies.  On his part, Museveni could not miss an opportunity of keeping track of the Kabaka’s engagements and movements.  With the appointment of Peter Mayiga as the Katikiro of Buganda in May 2013, relations took a new twist.  In June 2013 Museveni deployed a fresh batch of 17 soldiers to Kabaka’s security detail after sacking a corresponding number of the original KPU youth.  The Kabaka protested and six of them were reinstated. Meanwhile, the Kabaka asked Maj Ssenkoma, a retired army officer, to secretly investigate the 17 new UPDF additions to KPU.  Ssenkoma informed the Kabaka that 15 of the 17 had Kiganda names, but their lineage could not be traced to any of the Buganda clans. The Ethiopian trained, Maj. Ssenkoma had been Kabaka Muteesa’s bodyguard during the 1966 crisis.

The Kabaka led a delegation to State House where they signed an agreement for the return of Buganda’s property held by the central government.  In January 2014, Museveni deployed another batch of 21 soldiers to KPU bringing the total of soldiers deployed directly from the UPDF to 29.  With the original KPU figure standing at 28, the UPDF took full control of the Kabaka’s security detail.  Very soon the army’s JAAT took control of security during the Kabaka’s public functions. The then Director of I operations, Grace Turyagumanawe justified the deployment of JATT personnel:
“If we go to these smaller places, how do you expect us to ignore a big function attended by the Kabaka? He is a VIP; it is a priority to have his functions covered like any other VIP function.”

Armed men in black suits became a visible scene around the Kabaka during public functions.  The Kabaka’s lost the privilege of assigning these guards.  His movements to and from the palace had to be approved by the overall Commander of the guards.  The restrictions extended all those who sought access to the Kabaka.  All guards were banned from any private interaction with the Kabaka.  The cultural guards (Abambowa) were banned from getting closer to the Kabaka and assigned at the main gate.  Around January 2014, a source confided to The Observer:
“The commanding officer [Musaazi] has issued five orders to soldiers that they have to strictly adhere to. For example, they can’t speak to the Kabaka in confidence anymore, because Musaazi has told them that whoever the Kabaka speaks to in confidence, must reveal to him [Musaazi] details of their discussions.”

Since the ugly events of 2009, Museveni has consistently deployed army officers to take command of the Kabaka’s security detail.  He first deployed Capt. Isaac Ssebunya but when the Kabaka protested he was recalled.  Instead the army sent Capt. Steven Kisitu Mivule who was somehow tolerated by Buganda before he died in a fire outbreak in October 2012.  The fire outbreak gutted the Bulange Quarter Guard and is said to have been sparked off by petrol that had been stored together with guns.  They the army sent then Lt. Lutwama Musaazi who has helped consolidate the army’s control of the Kabaka’s so-called security detail.  The Katikiro warned the traditional civilian volunteer security force, the BANGAWA) culturally known as Kyayera Mbuga to keep off the Kabaka.  Consequently, it is very common to see these personnel beating up and manhandling the Kabaka’s subjects during public functions.

From the a foregoing and coupled by what happened to the Rwenzururu Kingdom in November 2016, it is very clear that Museveni has succeeded in trimming the Kabaka’s wings.  Unlike his father who put up a stiff resistance against the attack from the government forces before he managed to flee in 1966, Kabaka Mutebi has been placed inside a 24/7 ‘cobweb’.  Should the need arise, God forbid, these so-called bodyguard will simply deliver the Kabaka to Museveni.