UGANDA: Israel’s PM Bibi is paying a visit to the Kampala Regime

Staff Reporter | February 2, 2020
Want create site? Find Free WordPress Themes and plugins.
MARTHA LEAH NANGALAMA – It looks like Israel’s PM Benjamin Netanyahu has a short memory. When he visited Uganda the last time for the Anniversary of 90 minutes at Entebbe, President Yoweri Museveni gave the most highlarious speech. I think something was wrong with him that day and his media team should have taken away the mic.
Museveni kept praising Israel. Except he kept saying Palestine. Times of Israel was reporting live on Youtube live and I was looking, and wondering when Israel would realise that they were being insulted. WAPI.
My guess is that Bibi (Benjamin Netanyahu’s nick name) is flying to Uganda to cement the contract on Pegasus to spy on all Ugandans. OR, he is flying to Uganda to complete the settlement of “Israel will send you all asylum seekers we reject in Tel Aviv. We do not like black people and hey, Uganda was supposed to be the State of Israel. Hence take back your black people”.
I imagine that Museveni will say “well done brother. Send them all rejects to Uganda. Throw in Mosad, Pegasus, Arms and some scholarships. Did you know why I authorised Israel to grow Cannabis in Uganda? It is because you told me that it is a medicine and since Germany and Canada are dying for Uganda weed, Uganda now grows weed for Israel, Germany and Canada. Let me see which other countries we can export our weed to. Thank you my brother”.
WELL, THAT MIGHT BE THE CONVERSATION. But who even bothers to check facts these days. We are the #FAKENews Generation. Nebilala, nabalala. 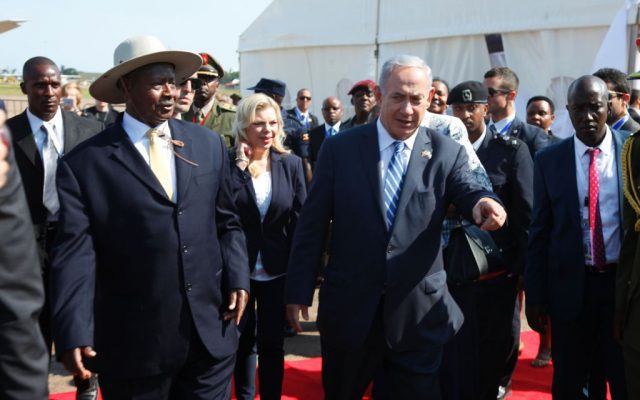 Prime Minister Benjamin Netanyahu, right, is greeted by the Ugandan president, Yoweri Museveni, on his arrival in at Entebbe airport in Uganda on Monday, July 4, 2016 (AP Photo/Stephen Wandera)

Prime Minister Benjamin Netanyahu’s office confirmed Sunday that he would travel to Uganda the next day for a one-day visit.

No specific reason was given by the Prime Minister’s Office for what was labeled as a diplomatic trip, but the premier was reportedly working to get Kampala to commit to opening an embassy in Jerusalem.

A Ugandan government spokesman confirmed the trip and said it had been scheduled at Netanyahu’s request.

Israeli officials said the prime minister was set to meet with regional leaders.

In the past, Netanyahu has courted Uganda as a possible “third country” to which he could deport at least a portion of the tens of thousands of African migrants currently residing in Israel. The plan fell apart in 2018 amid concerns by refugee activists that the migrants would be endangered if they were sent to Uganda. Appearing to hint at the possibility that the measure was back on the table, Netanyahu said at a campaign event last month that his government was working to “remove two-thirds of the [of the migrants] soon.”

The presence of the primarily Sudanese and Eritrean migrants in Israel has become a divisive political issue. While the migrants say they are refugees fleeing conflict or persecution, Israel views them as job-seekers who threaten the Jewish character of the state. Israel’s earlier deportation policy, which offered each migrant $3,500 and a plane ticket to other African countries, had been condemned by Israeli activists and the United Nations as chaotic, poorly executed, and unsafe.

In December, the representative of the United Nations refugee agency in Israel urged Netanyahu to reconsider a UN proposal to resettle roughly half of the country’s African migrants.

The UN agreement would see roughly 16,250 African migrants currently in Israel — mainly from Sudan and Eritrea — resettled in developing Western countries while a similar number would remain in Israel and receive temporary residency. Under the agreement, most of those who would leave would be unmarried men, while families, women and children would generally stay.

The premier had accepted the deal in 2018, only to change his mind 24 hours later under pressure from his right-wing coalition partners.

Netanyahu last visited Uganda in 2016 to mark 40 years since his brother was killed in an anti-terror raid at an airport in Entebbe.

The Uganda trip comes on the heels of high-profile visits by Netanyahu to the United States and Russia and just weeks before the March 2 elections in Israel.