UGANDA: How FDC activists were lured into the ‘court trap’ 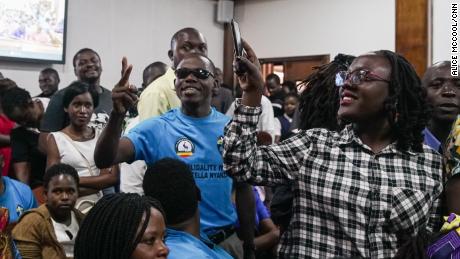 HOW THE FDC ACTVISTS WERE LURED INTO THE ‘COURT TRAP’

CHANGE OF GUARDS – Museveni’s security goons are holding six suspects in the alleged assault of a Magistrate during a court session in Kampala. The incident was a reaction following the conviction of former Makerere University Don, Dr. Stella Nyanzi to nine months imprisonment for calling Museveni and his wife “a pair of buttocks.”

After spending nine months on remand, Dr. Stella was convicted on the 1st of August 2019 before postponing the delivery of the sentence to the following day. As is the usual practice with such cases that have political connotations, crowds of political activists were expected at court. That’s is why despite the heavy deployment around the court premises, security could not physically produce Dr. Stella at the court premises. Instead, they opted to deliver the sentences to her via video link to her prison facility.

Indeed, big numbers of opposition activist arrived at the court ahead of the scheduled sentencing time. Interestingly, though these activists were donning their party uniforms, security did not stop them from accessing the court premises and the court room in particular. Equally surprising, even before the Magistrate had left her chambers for the court room those opposition activists had become rowdy but still the security goods did not bother to bring them to order. These two unusual developments would have been enough to make the activists to smell a rat.

The trial Magistrate entered the court room amidst a charged atmosphere and after pronouncing the nine months sentence, a bottle of mineral was hurled at her from the audience. The long-awaited moment had come, and the initially visibly idle security goons swung into action by violently arresting six of the activists. Though the police have not been able to clearly identify the person who hurled the bottle, obviously, a 300ml bottle of water could not have been hurled by six activists.

The incident has attracted mixed reactions from both the population and the none state actors. However, for the Museveni regime, the development is worthy jubilating – it has drawn the long overdue wedge between the opposition activists and the judiciary. All along the Museveni regime has excelled in the suppression of dissent amongst the masses in general. However, it has had trouble handling opposition political activists who have often sought sanctuary in the legislature and the judiciary. To a big extent the Museveni regime has succeeded in destroying the legislature through bribery, blackmail, intimidation and outright violence. The latest incident being when Museveni sent the army to invade Parliament and beat up M.Ps into lifting the constitutional presidential age limit.

However, despite the existence of regime cadre judicial officers, some of them have maintained the independence of the judiciary. In the same regard, elite opposition activists and political dissenters in general have always sought refuge in courts of law. For the Museveni regime, such opposition activists and the dissenting population in general are terrorists and the professional judicial officers are conspirators. If the scheme was to antagonize the judiciary and the opposition activists, the trick has worked and the real culprit will never be known. We are yet to see if the incident will prejudice the conduct of judicial officers towards political dissenters. On the contrary, whoever the real suspect is, there is enough circumstantial evidence that points to the fact that the security goons clearly foresaw the potential negative reaction of the activists but deliberately turned a blind eye to allow the mischief to take place. The rowdiness of the activists in court could have been used by regime’s security goons as a cover for assaulting the Magistrate and blame it on the activists. The latest example of such scenarios is the guns that were paraded by the security goons claiming that they had been recovered from Bobi Wine’s hotel room. What happened to those guns???

Did you find apk for android? You can find new Free Android Games and apps.
Sharing is caring:
politics, stella nyanzi, UGANDA, Special Reports Uganda, Stella Nyanzi, Special Reports, Politics Comments Off on UGANDA: How FDC activists were lured into the ‘court trap’ Print this News