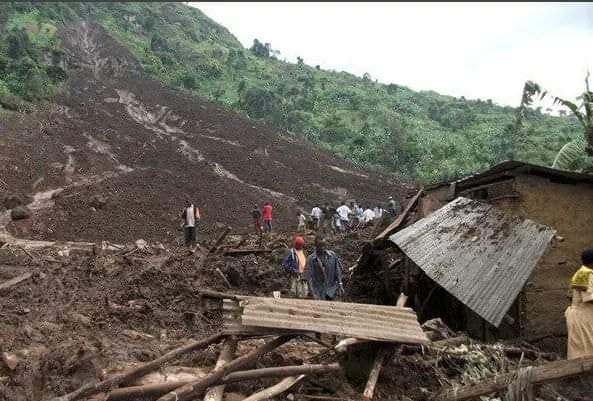 Government to pay landslide victims to resettle themselves, says Ecweru

BUTALEJA- The government has agreed to solicit funds for the resettlement of landslide victims living in Mt Elgon Sub-region. The State minister for Disaster Preparedness, Mr Musa Ecweru, said landslide victims would be resettled to safer areas of their choice in order to avert more disaster-related deaths.

“We are going to find money to pay the landslide survivors such that they can purchase land of their choice within the region because the method of building houses for them is too slow,” Mr Ecweru said on Saturday during his visit to Butaleja District to assess the extent of the damage caused by floods.

“We have agreed with the local leaders that all landslide victims will for now be evacuated to the safe areas in the set up camps till the rains reduce, as we solicit for funds to pay them,” he said.

In an effort to resettle them, the government in 2013 bought more than 2,800 acres of land in Bunambutye, Bulambuli District to relocate and resettle about 7,200 people out of 100,000 landslide victims. In 2018, the government embarked on the construction of 101 houses, which were completed in March this year. So far, at least 80 families have been resettled out of 101 registered.

However, leaders have been urging government to come up with another alternative, saying the method of constructing houses is not reasonable and quick enough to resettle the people.

“We have realised that giving people money will be quicker compared to constructing houses,” Mr Ecweru, said. The minister also added that relocating people to Bunambutye is a good idea but it is not very safe because the area is prone to floods.

“Bulambuli where people have relocated is not very safe that’s why there is need to channel the water into lake and also to plant trees so that the victims will not suffer from floods,” he said.

Mr Ecweru said trees would be planted in landslide prone areas will be afforested with trees to prevent more landslide disasters. Mr John Baptist Nambeshe, the MP for Manjiya County in Bududa District, had earlier advised the government to use compensatory approach to resettle the victims.

“This approach is quick and efficient because the Shs32 billion spent on construction of houses would have resettled a huge number of families compared to the 101 families they constructed houses for in a timeframe of two years,” he said.

In 2010, when another landslide occurred, more than 300 people were buried in Nametsi Village. Meanwhile, the early warning flood system that had been installed by the government in Butaleja District to alert residents of possible floods so that they can shift to safer zones, has been vandalised.

The residents told Mr Ecweru that the system no longer alerts them as it used to do during the initial years when it had just been installed.

Mr Mesulamu Wabbaye, the village chairperson of Masusulula B Village in Himutu Sub-county, said the siren system stopped functioning in 2016.

“The flood early warning system that government installed stopped functioning in 2016, so whenever it rains in the Bugisu, the floods evades our homes and gardens,” he said.

Mr Tom Wandera, the environment district officer, said the system should be restored because flooding causes unbearable havoc to the residents. Mr Ecweru said it’s unfortunate that the system that cost a colossal sum of money had been vandalised, two years, putting the lives of locals at danger.