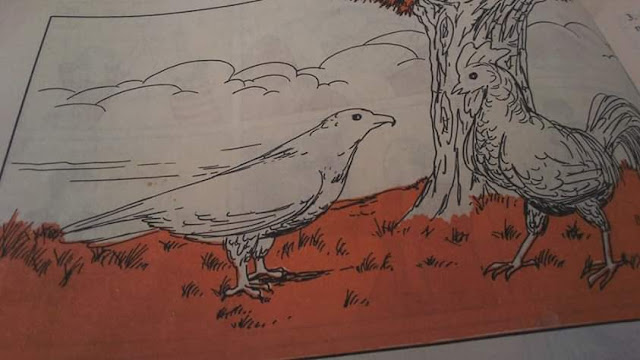 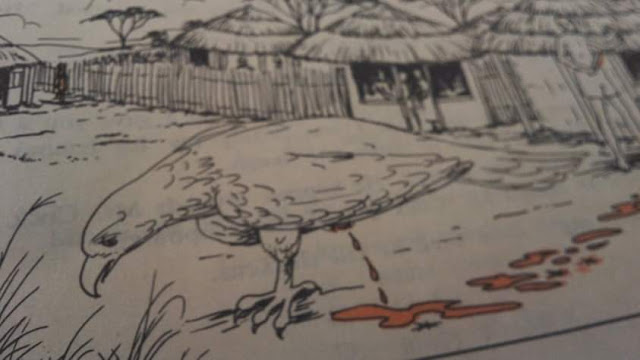 Long ago,  Mr.  Eagle and Mr.  Cock were very good friends. They lived in a house which was only a few miles from  a small village . They bought and cooked their own food.
One day there was no more salt in the house.  Mr. Cock thought,  ” I was going to the village tomorrow for food but now i will have to go earlier. I ought to go just now, before it gets too hot. ” Mr.  Cock then went to the village which was only a few miles from his house. He bought some salts which came from the bottom of the lake. He then thought about some of the things he would need for the rest of the week.  I am not cooking for mr.  Eagle tonight but i will cook my own food. Mr.  Hyena is coming for dinner tomorrow. I am going to Mrs. Leopard’s the next evening. Then i am leaving for a long safari in three days time. Mr. Cock then bought the food for which he needed for the rest of the week and started to walk back home.

He soon became very tired and decided to rest under a tree which was near the road. He stood and rested on one leg behind his body. While he was enjoying the cool shade, his friend Mr.  Eagle, appeared.  Well well ! Mr. Eagle said,  what is this all about? You have lost a leg?  You have got a lot of food on your head. And your carrying a large load of salt,  too!  Where did you get it? How much did it cost? And he asked many questions.

” Oh,  said Mr. Cock, I had no many”.
How did you get the salt then?
I gave the shopkeeper my leg to pay for the salt said Mr.  Cock.  Mr. Eagle said i need some salt. Did you get it at the lake?

Yes but if you don’t hurry, it will be sold said Mr.  Cock.
The Eagle went quickly to town. He went to the shop that sells salt and said,  I haven’t any money. Can i pay for the salt with my leg?
The shop keeper looked surprised and said  all right,  you can pay for it with your leg if you want to.  I like to eat meat for supper “. So he cut off the eagle’s leg.

Mr.  Eagle took the salt and lifted the load onto his head. He took one step forward and felt flat on his face!  He practiced and practiced. In the end, he learned how to hop, and he hopped all the way home.

Mr.  Cock had already arrived there and was walking around the compound on two legs.  Mr.  Eagle was surprised to see this and he  asked,  How did you get your leg back?
I never gave it away, said mr.  Cock but you gave your leg away for the salt said mr.  Eagle.
Don’t be foolish,  you asked me silly question so i gave you silly answer. When you came along the road,  I was resting my leg behind me. You’re silly eagle. He then began to laugh and laugh
Mr. Eagle became very, very angry. He hopped towards Mr.  Cock and tried to beat him.  Then he chased Mr.  Cock out of the compound.
Ever since that day, eagles have tried to kill chickens.

Did you find apk for android? You can find new Free Android Games and apps.
Sharing is caring:
education, literature, UGANDA, Nile English Course, Ichuli Part 5 Uganda, Literature, Education Comments Off on UGANDA: From Ichuli part 4, Here comes the story of Ichuli part 5 WHY EAGLES LIKE TO KILL CHICKENS Print this News