UGANDA: Free Bobi Wine protests: could this be a signal to Museveni’s fall? 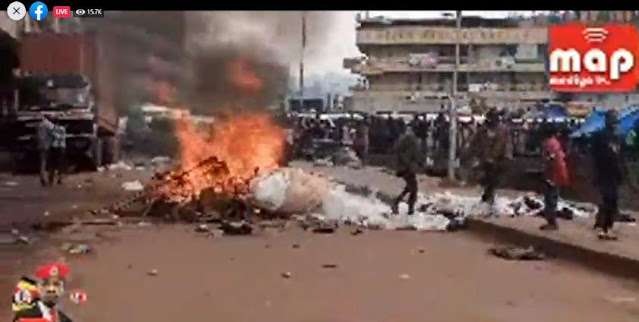 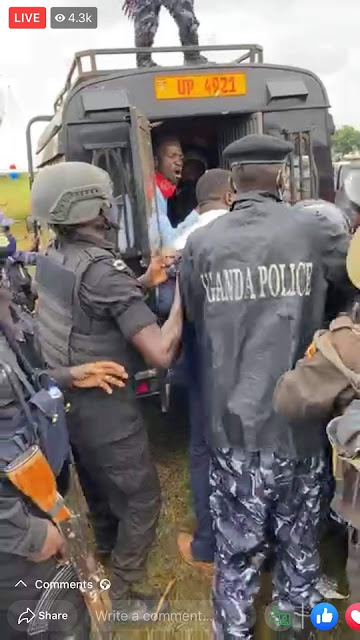 By Our Reporter who is based in Uganda

Yesterday, Wednesday 18, the whole country was plunged in caose as supporters of the National Unity Platform’s Presidential Candidate Robert Kyagulanyi Ssentamu protested the arrest and subsequent detention of their leader.

Bobi Wine, who was scheduled to campaign in Luuka, Buyende and Kamuli was arrested at around 11 am on Wednesday from Luuka town council and driven to the infamous Nalufenya torture detention where he was detained from.

The news of Kyagulanyi’s arrest, who by far remains Museveni’s fiercest challenger spread to all corners of the country like a bushfire.

Isolated cases of demonstrations were reported in the afternoon, which sprouted to lost parts of the country’s urban centres by the end of the day.

Eventhough police say three people were killed and 38 injured in the days violence, the number could be actually bigger according to reports from the difff parts around the country’s capital- Kampala.

Forinstance, in Nansana on the outskirts of Kampala, at least nine people were reported dead including an Asian and two young men from the same family in Kibwa zone.

But it wasn’t Bobi Wine alone violently arrested by the brutal regime police. Patrick Amuriat Oboi of the opposition Forum for Democratic Change [FDC] was wrapped up from the northern town of Gulu the same day before he was released later in the night.

Upon his release, Amuriat who is also the supreme leader of the country’s biggest opposition political party – FDC, announced that they would call a a press conference today to announce their  decision on whether to remain in the presidential race or pull out of it.

Following the arrests, Gen. Gregory Mugisha Muntu, another one in the race announced that his Alliance for National Transformation Party had paused all it’s campaign programs in solidarity with it his counterparts.

The former UPDF Commander also sounded a strong warning to his former ally – Yoweri Museveni that next year’s election won’t be business as usual.

According to Muntu, the future of the country depends on how the ruling regime chooses to handle the current situation.

Buganda Kingdom, another non political institution which has previously had a very strong influence on the politics of the country, has already showed it’s solidarity with the oppressed candidates.

“We condemn acts of torture and human rights violation meted on presidential and parliamentary candidates. The killings, teargas and excessive use of force must stop because they cause more confusion in the country,” Mayiga said in a statement issued in Luganda, the kingdom’s official language.

“We are aware that Covid19 is a deadly disease but that doesn’t mean that those who flout Coronavirus prevention guidelines, as outlined by health experts, should be treated like animals. Detention and all manner of human rights violations are unlawful.”

Mayiga further warned that government shouldn’t use Covid19 “as an excuse to break the laws of the land.”

For the first time in a long time, opposition against Museveni’s dictatorship seems to have found a common cause that could propel them to unite and possibly injure the 35 year tyrannical administration.

With demonstrations spread over other districts outside Kampala such as Jinja, Tororo, Gulu, Lira, Arua, Masaka, among others, all that could be needed to force a regime change is the unity of all the forces of change.

With Besigye’s publicly professed pessimism about regime change through elections, he has for some time now been preaching for a “plan B” as an alternative to the “sham elections”  organised by Museveni as a formality to legitimise his dictatorship.

As such, as things stand, the opposition forces seem to be in the best position pose a formidable resistance against Museveni and finally stage a successful revolution that could finally see the country witness a first