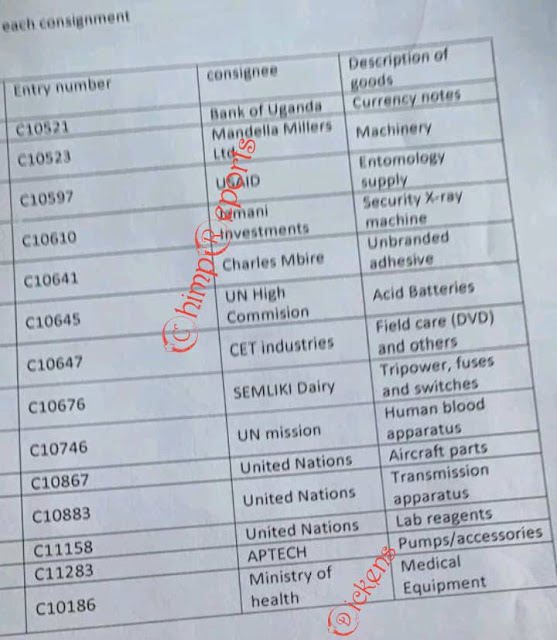 Details have emerged of the consignment that was on a plane chartered by Bank of Uganda to carry the national currency.

According to the consignment voucher, the plane was carrying currency notes for BoU.

There were also machinery for Mandela Millers LTD of businessman Omar Mandela.

Others include: security x-ray machine for Amani investments; ubranded adhesive for tycoon Charles Mbire; field care (DVD) and others for CET industries; triple power, fuses and switches for Semliki dairy; pumps/ accessories for Aptech and medical equipment for the ministry of Health.

The inventory document acquired by a local website Chimpreports is what landed BoU officials in hot soup.

Eight officials are currently being investigated by State House Anti-Corruption Unit for carrying other cargo on a plane chartered by government.

Deputy governor Louis Kasekende on Saturday apologised for “ashaming” the central bank with a string of scandals.

It was governor Emmanuel Mutebile who whistleblowed on his own officials leading to a raid on the central bank.

Government has since dismissed this position saying no extra currency was brought in.