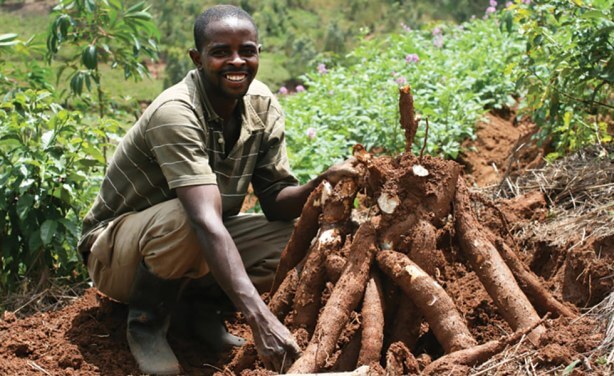 GM cassava research progresses in Uganda
By Isaac Ongu | Cornell Alliance for Science | August 30, 2019
As Ugandan researchers progress in breeding genetically modified (GM) disease-resistant cassava, they are requesting permission to create permanent demonstration gardens of the improved crops. The goal is to ensure continuous documentation of the ongoing cassava research and also provide a place where people can see GM plants.
However, the request by National Crop Resources Research Institute (NaCRRI) scientists still must be submitted to and approved by the National Biosafety Committee, which regulates research and products involving genetic engineering.Meanwhile, elected councilors from the Mbale district in Eastern Uganda visited NaCRRI’s confined field trials for GM cassava developed under the Virus Resistant and Nutritionally Enhanced cassava for Africa (VIRCA Plus) project to see how scientists are working to overcome the devastating effects of cassava viral diseases.Mafabi Mohamad, the speaker of the Mbale District Local Government Council, noted that the “cassava diseases that researchers have addressed here are the very ones that impact on us directly. Cassava used to be our staple food crop, but farmers are abandoning it.” Unless cassava is restored as a staple food, there will be a food security problem, he said.

Though cassava is Uganda’s second-most important food crop, production has stagnated at about 3 million tons annually since 2013, according to the Uganda Bureau of Statistic’s 2018 report. This is due in large part to the devastating effect of cassava mosaic and brown streak diseases, which are very difficult to control. A cassava baseline study report by NaCRRI carried out in northern Uganda found persistent prevalence of the two diseases.

Shak Amo Martin, a local leader and farmer from Busoba sub-county in Mbale, confirmed his area suffers from these cassava diseases.

“I am the only leader here with a cassava factory that is nonfunctional because the factory could not get enough cassava as a result of low yields from diseased cassava varieties,” he said. His now-defunct factory, Yogi Agro, was established 10 years ago with support from the district authorities to process cassava into products like starch and glucose.
Grassroots mobilization and awareness

Alfred Namasa, who represents his community in Busiu town to the Council of Mbale District Local Government, reached out to Martin and other councilors and urged them to learn how GM cassava can resist the diseases that wreak havoc on farms in their communities.

“Our leaders double as farmers, and I know that once they get to appreciate the benefits of this technology, they will be better positioned to motivate and empower other ordinary farmers whose livelihoods are directly affected by the cassava viral diseases,” he said.

Namasa is familiar with GM crops because of his prior engagements with NaCCRI researchers and his training as a Cornell Alliance for Science Global Leadership Fellow. His passion for the wellbeing of his community inspired him to quickly petition his fellow leaders to learn more about GM cassava so that they can be in a position to guide their farmer constituents. The outreach was supported by the Science Foundation for Livelihoods and Development.

The VIRCA project has developed varieties that are resistant to both the mosaic and brown streak diseases. It is also improving the disease-resistant varieties to add the essential nutrients of zinc and iron.

“Viral diseases can destroy up to 100 percent of a cassava crop yield, threatening livelihoods and leading to hunger,” according to the VIRCA website. “Cassava Brown Streak Disease (CBSD) destroys the edible roots even when rest of the plant looks healthy, and Cassava Mosaic Disease (CMD) can stunt or kill plants outright.”

Dr. Henry Wagaba, a senior scientist with VIRCA Plus and NaCRRI, spoke to the visiting councilors on the current status of the research.

“Currently, we are conducting confined field trials to be able to select the best varieties for farmers,” he explained. “The trials are here at NaCRRI, Kasese and in Serere. Information we collect from these trials will be provided to the National Biosafety Committee to inform their decision making on releasing the best varieties to farmers.”

The VIRCA Plus cassava varieties, however, will only reach farmers in the presence of a regulatory framework that will enable scientists to release the variety. Though Uganda’s Parliament passed a biosafety bill to regulate open field trials and eventually release GM crops to farmers, it has not yet been signed by the President.

Isaac Ongu is an agriculturist, science writer and an advocate for science-based interventions in solving agricultural challenges in Africa. Follow him on twitter @onguisaac

This article was originally posted at the Cornell Alliance for Science and has been republished here with permission.