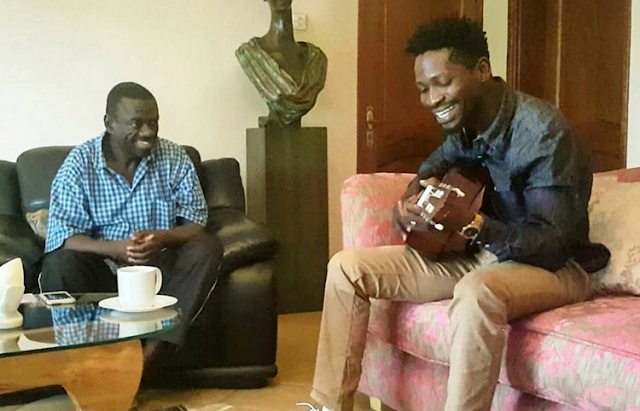 I am sharing the following as received from Uganda.  I hate to burst your bubble. Kyagulanyi will never be president of Uganda.  You only have to read the barometer.

As much as the 30 million unemployed youth are for him and for his presidency (me too, actually, but I am more practical), Bobi’s biggest strength for Uganda will be to awaken the masses for them to take over the reigns of leadership of SHITHOLE Boda Boda Banana Republic.

If you have any doubts of why Bobi will never be president, remember his closeness with Dr. Kizza Besigye and how much FDC diehards fought against him.

Do not delude yourselves.  A degree means nothing.  We are talking about people who went to the bush, ate rats, monkeys and walked naked and slept in bushes!

Elites who think they will take down Museveni have no idea what awaits them.

I love you Bobi, but you are too smart to let Ugandans believe that you can change the status quo in government.  WORK on changing the mentality of the masses.  Those people are hungry for hope. Actually, they are even hungry for food.  But the great leader that you have proven, you will find the best way.  In all things, Best of luck kid brother.

He probably still has a lot to do to come anywhere near the top office in the land but when you take a closer look at all our presidents, you’ll agree that they were not exceptionally better than Bobi Wine in POLITICAL TERMS by the time they got into office.

1. It isn’t the most politically qualified people that have become presidents whenever Uganda needed one.

Yet at Independence, Muteesa and Obote came even ahead of people like the youthful but fearless Abubakar Mayanja.

Unfortunately, UNC had collapsed in 1959, around which time, Milton Obote had strategically joined the late W.W. Rwetsiba’s Uganda People’s Union to form Uganda People’s Congress which allied with Kabaka Yekka to form a coalition government, where Muteesa was President and Obote Prime Mister.

I’ll ignore the circumstantial heads like Binaisa and Yusufu Lule and go straight to Idi Amin. He had no formal Education to write home about and in terms of political experience, he wouldn’t come anywhere near the great men of the UPC and DP, yet with his military experience, he ended up being Uganda’s second longest serving president.

2. A man like Museveni didn’t initially have any political capital. When he first attempted to eject Amin around 1972, many didn’t even know his name.

When he contested for the presidency in 1980, the results are a clear testimony that he wasn’t even half as popular as Bobi Wine.

This takes me to my initial “claims”.

On paper, they are not necessarily the best political brains this country had. In fact, many wish they had been as popular as Bobi Wine back then.

The presidency has always been taken by those who understand the times, and in this era, Bobi Wine isn’t misplaced.

He may fail twice or thrice, but given his age, and his style of political play, his chances are ripe.

« UGANDA: Entire village in Napak gets burnt to ashes, appeal for assistance (Previous News)
(Next News) UGANDA: Why Sam Omala was sent by regime to stand surety for Kirumira »

UGANDA: Opposition has no chance in hell in 2021