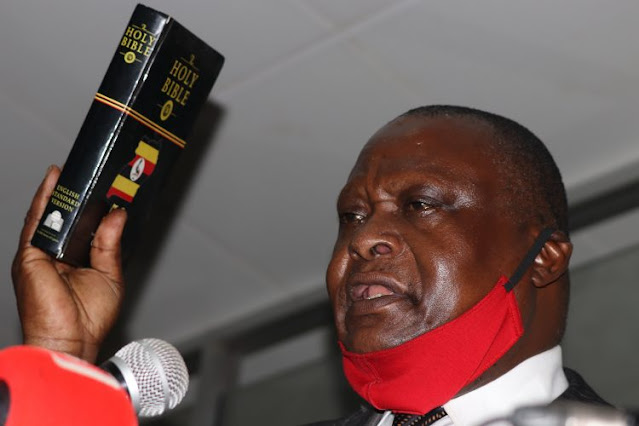 By CHANGE OF GUARDS
On August 9, 1897, the Chiefs in Council led by the Katikiro (Prime Minister) Apollo Kagwa deposed Kabaka (King Nwanga) after he declared war on the British colonialists.

In April 1899, Semei Kakungulu and Andrew Lwandaga led troops of Baganda tribesmen that captured the Kabaka Nwanga and Omukama Kabalega in Lango.

Kabaka Edward Mutesa who died in exile in 1969 is said to have been poisoned by the government in Uganda through some of his close Baganda associates in London.

Around February 1982, Andrew Kayiira’s UFM agreed with Museveni to carry out a joint attack on the government troops barracks at Lubiri. The NRA did not show up and the UFM carried out the attack but the weapons that were captured were instead delivered to the NRA by the likes of Sonko Lutaaya, Eric Mukasa and others. The UFM never recovered from this backstabbing by the NRA.

Around late 1985, the UFM/FEDEMO joined hands with the Okello junta but the NRA refused to join and instead planted Kasirye Gwanga into the UFM for spying purposes. When he was bursted, he defected to the NRA around late 1985. He was immediately rewarded with the rank of Senior Officer in the NRA. The March 1987 purge of UFM/DEDEMO who had joined hands with Museveni’s NRM/NRA saw Kasirye Gwanga as the key state witness in the alleged treason. The case collapsed but Kayiira was mysteriously killed and was buried together with UFM/FEDEMO.

In April 2020, Gen. Kasirye Gwanga cried out that he was under detention in a military barracks but the army quickly refuted the claim. On the same day, Kasirye Gwanga was coerced into retracting his claim and the matter went silent but two months later, Gwanga was pronounced dead.

During the Constitution making process, Buganda overwhelmingly pushed for a federal form of government. The Buganda delegates conspired with other delegates from other parts of the country to plot a final push for federalism. The leader of the Buganda delegates who had also been the First Deputy Katikiro and Ssebalangira (Chief Prince) of Buganda Kingdom, Besweri Mulondo, was selected for the presentation. When he took to the floor on March 28, 1995, he instead expressed his opposition to federalism – marking the end of the debate on federalism. Museveni rewarded Mulondo with the position of Chairman Uganda Land Commission and, later,  Senior Presidential Advisor on Land. Mulondoe died in 2016 a dejected man in the entire Buganda Kingdom.

In 1999, Col. Dr. Kiiza Beisgye fell out with the Museveni regime by luck due to his (Besigye) request to retire from military service which was miraculously granted. Besigye immediately declared intention to run for the Presidency against military dictator Museveni. The panicky regime embarked on looking for ways of bringing Besigye down. An elderly, Malita Namayanja (Mama Chama), whom Dr. Beisgye had brought under his personal care (1983 – 1986) in the bush during Museveni’s Bush War, was used in this scheme. She recruited a housemaid, Aisha Kiguli for Dr. Besigye’s home in Kampala for the scheme. She was approached with a proposal to do some mischief against Dr. Besigye but she refused and instead confided in Dr. Besigye. A one Joanita Kyakuwa who had stayed at Besigye’s home as a student was convinced by the regime to allege that Dr. Besigye had raped her around 1997 and 1998. She was taken to meet Museveni in 2001 by a one John Musinguzi (current Commissioner General URA) and was kept in a tightly guarded house inside State House for the next five years.

Dr. Besigye escaped to exile but when he declared intentions to return to Uganda in 2004 to contest in the 2006 presidential elections, the scheme was revived. In 2004 Aisha Kiguli was kidnapped by the then Director of CID, Elizabeth Kuteesa and held hostage. Kuteesa coerced her into accepting to testify that she had witnessed Dr. Besigye rape Joanita Kyakuwa in 1987. Dr. Besigye returned from exile in October 2005 and applied in court for the production of Aisha Kiguli by security agencies. The application collapsed because the victim had been renamed Nagiguli in place of Kiguli. A month later in November 2005, Besigye was arrested and charged with the rape of Joanita Kyakuwa, terrorism and illegal possession of firearms. He was nominated while in detention and though he was granted bail, he attended court 25 times during the three months’ campaign period when the prosecution of the rape case was ongoing. During the trial, Aisha Kiguli told court on oath how she had been promised a house and a poultry business.

Dr. Besigye was acquitted of the rape case in March 2006 just a few weeks after he had lost the presidential contest to Museveni. The lead Prosecutor in the rape case was Simon Byabakama, the current Chairman of Museveni’s Electoral Commission.

In 2007, the then Director of CID, Elizabeth Kuteesa joined INTERPOL, first as Assistant Director of African Region, and later as Head of National Central Bureau and Regional Police Service Unit – becoming the first African woman to head the same. John Musinguzi Rujooki, who coached and took Joanita Kyakuwa to Museveni, is the current Commissioner General of the national tax body, URA.
Aisha Kiguli mysteriously died five months later in August 2006. Her body was kept in a military hospital and buried by the army. The plot of land in Gayaza and its house that the regime was constructing for her was sold off by the same security handlers and the the poultry business did not materialise. She was chased from the state house rented house in Naalya Estate and five months after the conclusion of the trial, she mysteriously died after falling sick for two days in August 2006. The body was kept by the army at Mbuya military hospital and and the army carried out her burial.

A retired Police Officer, Nkonge Kibalama registered his National Unity Reconciliation and Development Party (NURDP) in 2004 but it never took part in any electoral process. In July 2019, Kibalama entered into an understanding with presidential hopeful, Robert Kyagulanyi that saw the party renamed National Unity Platform (NUP) which endorsed the latter as its presidential flag bearer for the 2021 general election. However, in its desperate efforts to block Kyagulanyi’s presidential bid, the Museveni regime moved to undermine NUP. Museveni’s regime sponsored two people who are close to Col. Juma Seiko and they petitioned court challenging the way NURDP was re-branded. In August 2020, Nkonge Kibalama alleged that his life was in danger as strange people were sending him death threats. He swore an affidavit in defence of the transfer before he disappeared from his home which was taken over by soldiers.

A video clip of Kibalama decrying betrayal by Kyagulanyi for failure to honor a USD 5m transfer money went viral. The army denied holding him but when court summoned him for cross-examination by Kyagulanyi’s Lawyers Kibalama showed up under heavy security. Once in the dock he told court that he had been kidnapped and taken to Museveni’s Chief of Defence Forces (CDF), Gen. Muhoozi who questioned him about the transfer of his party. Kibalama claimed that since then, he has been held against his will in a house in Mbale town. He disowned the video clip and denied ever selling his party to Kyagulanyi. He appealed to court for help in regaining his freedom. A few hours after leaving the courtroom under the same heavy security, the same Nkonge Kibalama addressed a press conference where he denied having ever been held against his will and that he had been and was a free person. The army issued a statement acknowledging that indeed Kibalama had met the CDF but on his own request over personal security concerns and that he was not in any form of detention.

The development came just a few days after Basajja Mivule and group denounced Kyagulanyi Ssentamu and his NUP.