UGANDA: Besigye says Mbabazi should have been elected president – HAS EVERYONE AT HOME GONE MAD? 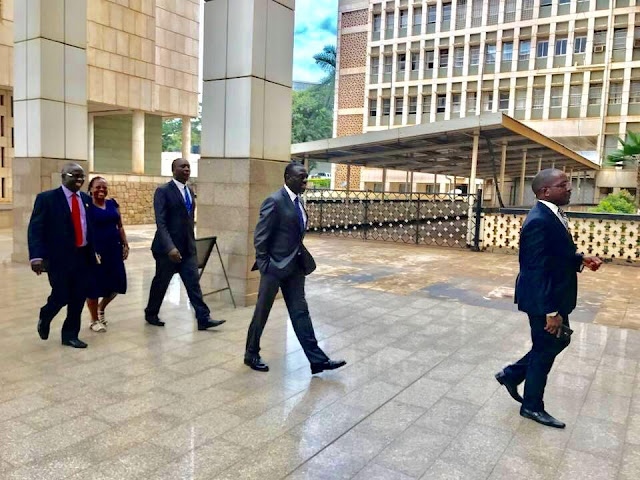 KAMPALA (@UG_EDGE) – Former presidential candidate, Kizza Besigye, says the public was misinformed that he was against the decision by the then FDC president Maj Gen Mugisha Muntu to appoint the opposition leadership in Parliament after the 2016 general elections.

Besigye was Wednesday meeting opposition Members of Parliament at the parliamentary building in Kampala who he addressed on the role of parliament or individual in stopping/failing a dictatorship.

“Following the rape of the constitution in Dec 2017, where some MPs were bribed to remove age limit from the constitution, Kizza Besigye and People’s Government have been putting up mechanisms and designing plans of how to restore the constitution,” said his aide, Ronald Muhinda.

According to Muhinda, Besigye is lobbying various groups to appreciate the urgency of having a political transition in Uganda.

Accompanied by the Minister for Presidency and former Leader of Opposition Wafula Oguttu, Besigye noted that there was a lot of misinformation at the beginning of the 10th parliament.

He went on: “We had never been in any form of manner opposed to anybody assuming our seats, the small matter that was taken out of context was to see people who take out seats change and that’s not a matter for us.”

According to him, in Uganda, there is a presidential system and therefore the president forms the government.

He said in the last election, Amama Mbabazi would have been elected president.

“He didn’t have a party but he would formed a government. What would NRM and FDC be in his government?” Besigye wondered.

He shared with MPs his optimism that change in Uganda is coming sooner than thought and that it could be realised before the next elections.

Together with MPs, they shared views on activities including increased awareness of the population in pursuit of a free country and the use of the country’s resources.

“This meeting wasn’t about differences, we were sitting to discuss how to assert the will of our people that was given to us in the election,” he said after the meeting attended by MPs like Ssemujju Nganda, Gerald Karuhanga, Mubarak Munyagwa and Robert Centenary. —— AUTO – GENERATED; Published (Halifax Canada Time AST) on: May 16, 2018 at 11:40AM

Did you find apk for android? You can find new Free Android Games and apps.
Sharing is caring:
politics, UGANDA Uganda, Politics Comments Off on UGANDA: Besigye says Mbabazi should have been elected president – HAS EVERYONE AT HOME GONE MAD? Print this News