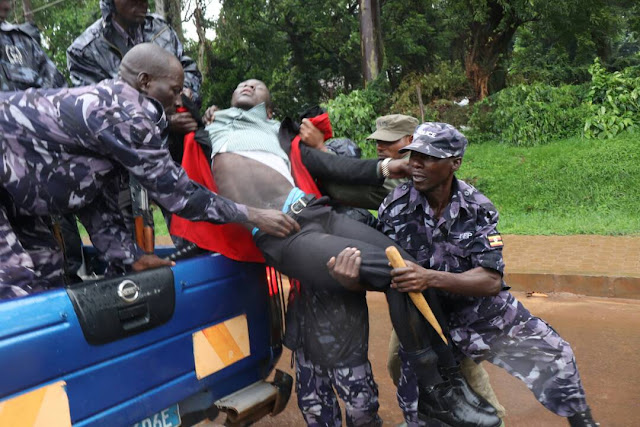 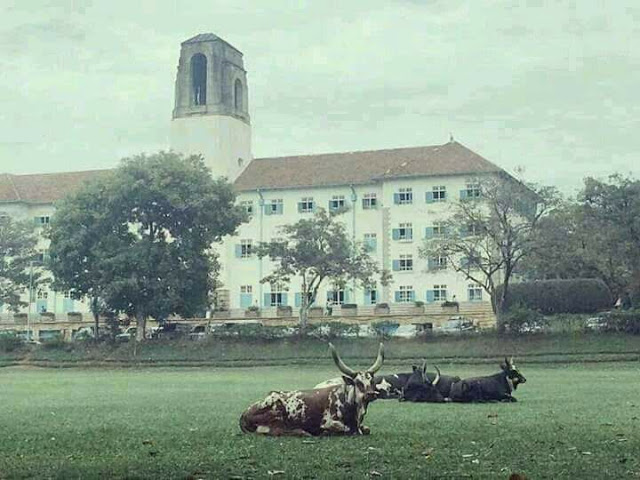 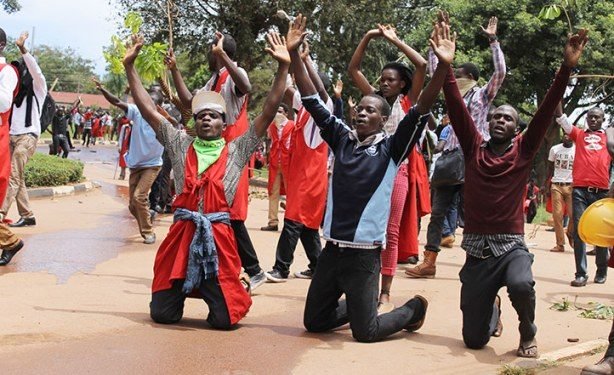 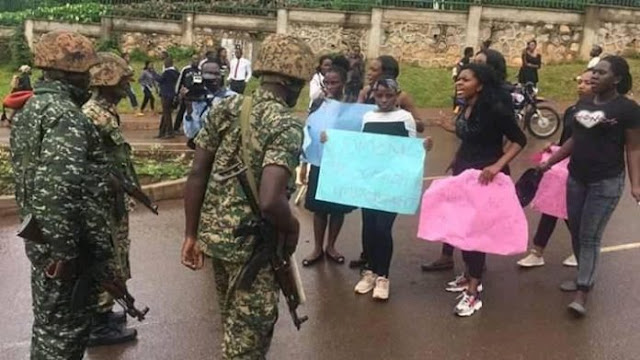 CHANGE OF GUARDS – Museveni’s 33 years military dictatorship has once again unleashed immense brutality on Makerere University students who were protesting a 15% increments of tuition fees. The army, police and other auxiliary forces have descended on the university campus indiscriminately beating up, arresting, teargassing, breaking into student hostels and destroying personal property, kidnapping, detaining and expelling a number of students. Consequently, a number of students have been seriously injured and academic endeavours greatly affected.

The final order for the army to attack the university could only be issued by Museveni and nobody else. Makerere University is Uganda’s oldest and biggest public institution of higher learning. It has a history of directly and indirectly influencing national and regional politics. Since coming to power 33 years ago, Museveni has never had a liking for Makerere University. As a center of academic excellence, Museveni was rightly suspicious that the academicians at Makerere University would not embrace his communist military dictatorship. Over the years, he has taken various measures to undermine the political historic role of Makerere University.

Since the coming onto the political scene of mass protests as a means of regime change, Museveni has been very worried of the possibility of a mass uprising more especially in the capital, Kampala. He has taken various measures to avert such an eventuality. Museveni has succeeded in branding all other entities that have the potential to stage massive protests as terrorists, hooligans, thieves etc. Given its proximity from the city center (less than four kms), Makerere University students have always been a threat to Museveni’s political machinations. He fears that those entities that are craving for regime change may use Makerere University students to spark off a popular uprising similar to the Arab Spring.

This website has in the past submitted several pieces in the same regard. Here below, we reproduce one such piece that was made three years ago:

Uganda’s military dictator, Museveni has ordered for the indefinite closure of Makerere university. This follows a sit-down strike by lecturers who are demanding for their eight months pay. Consequently, the students went on strike demanding to have their lecturers. As usual the police brutally moved in and embarked on brutalizing the students culminating into violent scenes. This development comes amidst a tense political and economic situation in the country and Kampala city in particular.

The opposition pro-change political activists Defiance campaign is gaining popularity and strength both in the country and Kampala city in particular. The Defiance campaign is premised on mobilizing the masses to regain their power that is currently usurped by the regime. The regime has responded with brutal force against any form of activism against the unrelenting activists. The situation is ripe for such mass action and the regime is overstretched in containing it.

The regime strongly believes that the advocates of the Defiance campaign are up to a sinister scheme of mobilising the population to match and take over strategic government installations like Nakasero State House, City Square, Parliament etc. the Arab Spring way. Makerere University students would compose a vital task force to handle such a move. It’s for the same reasons that yesterday as the violent strike was taking place at Makerere, in the city center the Police was engaging the main pro-defiance leader, Dr. Besigye. Because it could not afford to handle the two incidents concurrently but more so the fear that the latter could fuel the former, it left him off the hook.

The regime believes that the ongoing Makerere crisis is linked to the opposition Defiance campaign. It’s for this sole reason that Museveni had to move very fast and close the university before sending the students home. For the same reason, the regime has ordered the closure of private hostels for students which are located outside the university so as to suffocate ease of mobility in the event of mass protests. For the Defiance campaign, it’s a blow because the university students composed a potential Special Task Force in the event of defiant mass protests that they are advocating for. Why didn’t Museveni send in soldiers to lecture the students in place of the striking Lecturers?

The current strike at Makerere University has taken Museveni by surprise. With his wife as the Minister of Education coupled by the new cadre Vice Chancellor, Prof. Nawangwe, Museveni had falsely believed that he had finally succeeded in trimming Makerere University’s wings. To him, the strike by students (including those in primary and secondary schools) more so in the heart of the city is a time bomb that deserve to be detonated with maximum brutal force and precision hence the violence.

« NTVUganda has added TALK OF THE NATION: Was the force used by security on Makerere Srudents necessary? video (Previous News)
(Next News) Bruce Springsteen – I’m On Fire (Official Video) »