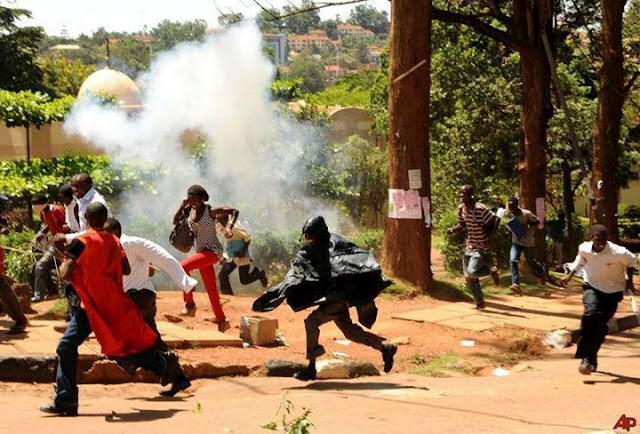 CHANGE OF GUARDS – The Museveni regime recently decreed the scrapping of government scholarship for university students. The state offers scholarships to about 12,000 students at its 9 public universities. Of these, 6,296 are from the oldest and biggest university, Makerere. Two months ago, the regime issued another decree scrapping provision of meals by private companies. In 2014 the regime scrapped provision of meals to students but instead it paid students 4,000/= (slightly less than one and a half US dollar) daily for meals provided by private companies that were contracted to run restaurants at the 9 halls of residence. In 2013 it had scrapped the provision of meals to private students.

In 2014 the regime enacted a Higher Education Students Financial Board (HESFB) to provide loans and scholarships to Ugandan students pursuing higher education with the objective of increasing equitable access to higher education. It was to cover tuition, functional fees, research fees and aid and appliances to students with physical disabilities. Repayment with interest is within one year after completing the course. Centenary Bank partnered with the government on the loan scheme whereby it was to process the application forms on behalf of HESFB, advance funds to students accounts and remit funds to institutions.

Initially it targeted students who qualified to pursue science courses but could not afford the cost of higher education at 18 chartered institutions and 33 other tertiary institutions. Later the scheme was extended to a few students pursuing selected arts courses but the number of beneficiaries has steadily remained at 1,200 students per year.

Of the universities in Uganda, Makerere excels as the vanguard of university politics in the country. With almost half of the total number of university students, it has the biggest number of students in the country. Of these, almost half are sponsored by government. During the struggle for independence, Makerere University students played a key role. In 1976 Makerere University students attempted to overthrow the Iddi Amin regime. During the controversial 1980 elections, Makerere students and Lecturers were actively involved in shaping the politics of the time. It also actively served as a recruitment centre for Museveni’s Bush War. Since Museveni took over power he has been fighting tooth and nail to suppress the political stamina of Makerere. As early as 2007 the then Minister of Education Namirembe Bitamazire told Parliament that government intended to scrap funding of students’ welfare.

He immediately embarked on political indoctrination through his so-called Cadre Development Courses dubbed Mchaka Mchaka for university students and lecturers. Later all Senior Six graduates were required to attend a two months Mchaka Mchaka course before joining the university. The reasoning was that the course would promote patriotism and basic military skills. Then came the Patriotic Clubs in secondary schools. And the most recent Crime Preventers scheme that witnessed university students being hoarded into the police training school.

Unfortunately, despite all the above manipulative schemes, both the students and lecturers have remained focused in asserting for their rights. They are viewed by the regime as opposition leaning in both form and content. Strikes have remained a major problem by both students and staff with dire consequences including deaths and arbitrary closures. On top of Museveni’s historical mission to destroy education in the country, he has been scheming to suppress the mobility capacity of university students. By scrapping meals, he thought he had dealt with students’ major cause of grievance. By encouraging off campus accommodation he thought he had dealt a blow to the students’ mobility capacity during strikes. With the disappointing results, he is now moving to scrap government sponsorship.

In his estimates, he believes that by subjecting all eligible students to a Students Loan Scheme he will be able to buy total loyalty and submission. The children of the regime political entrepreneurs and passive elites will not qualify for the student loans; moreover, they don’t get involved in strikes. It is the “hungry” and underprivileged children of the deprived and impoverished Ugandans that strike thus being targeted. That way, students will treat the sponsorship not as a right but a privilege that can be withdrawn if he/she “misbehaves”. He will go ahead to take control of all admissions to higher institutions of learning and government will be able to not only discontinue such “misbehaving” students but to declare them ineligible for admission at any such institution. That will be the end of students’ activism and Gen. Muhoozi will reign over a “disciplined” higher institutions of learning.