More than 12,000 charities have been told they can no longer operate in Uganda as critics raised fears that government regulatory measures effectively amounted to a purge.

The government said a review that took place in August and September would root out poorly performing organisations and create “a reliable data bank on all NGOs” in the country.

But activists say a requirement to validate their status could have a “chilling effect” on their work.

Many fear that any criticism of the government could lead to a withdrawal of status.

Many organisations believe they are already under scrutiny. In June, the National Coalition of Human Rights Defenders, which represents 149 NGOs in Uganda, reported that its members had suffered 34 office break-ins since 2011, but received no reports on police investigations.

Following the government review, the number of officially registered NGOs in Uganda has been slashed from 14,207 to 2,118.

It is understood that most of the organisations told to stop operating are local groups, rather than large international NGOs.

Jeje Odongo, Uganda’s minister of internal affairs, said in a statement last week that organisations not included on the register must cease their operations immediately.

The government has also directed banks not to open accounts for unregistered groups, which will no longer be able to hire rooms.

Dr Frank Mugisha, director of Sexual Minorities Uganda, said his organisation is challenging a decision to deny the NGO’s registration. MPs in Uganda are attempting to retable a bill to make homosexual acts punishable by death.

Mugisha said other organisations that campaign for LGBT rights have also been left off the register.

Such groups can operate as associations, which do not need government registration, but this would constrain their activities and ability to mobilise funds.

Dr Livingstone Sewanyana, the executive director of Foundation for Human Rights Initiative, which did make it on to the register, said the validation exercise was being conducted within the law, which allows for NGOs to be routinely monitored. However, he felt an immoderate amount of information was required.

“They want to know your source of funding, your board, and your staff. I would say the information they need is excessive. If [the information] were put to good use I would have no problem, but it could easily be abused,” he said.

“The exercise is legitimate, but it creates a lot of pressure on the part of the NGOs. It has [a] restraining effect and you have to look over your shoulder in terms of how critical you are. You have to exercise some degree of restraint. It has a chilling effect on the ability to widen the parameters of democracy and good governance.” 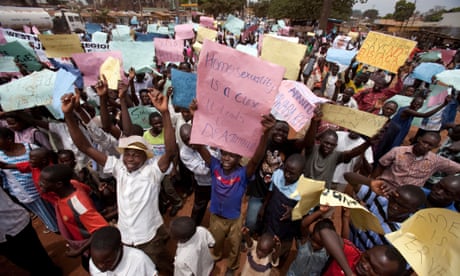 Stephen Okello, executive director of Uganda’s national bureau of NGOs, told reporters in Kampala there was still a chance for NGOs to submit the information needed to be validated as a legitimate organisation.

In August, the Financial Intelligence Authority, an agency that tracks suspicious money movements in the country, directed banks to unveil financial details of the top 13 NGOs in the country.

These included ActionAid International Uganda and the Democratic Governance Facility, an entity set up by a consortium of eight donors: Austria, Denmark, Ireland, the Netherlands, Norway, Sweden, the UK and the EU.

ActionAid had its accounts frozen in 2017 during an investigation into alleged money laundering. The accounts were unfrozen after several months.

In 2016, the Ugandan government introduced a new law that tightened the rules for NGOs. It established an NGO Bureau with powers to blacklist, suspend, or revoke the permits of any organisation.