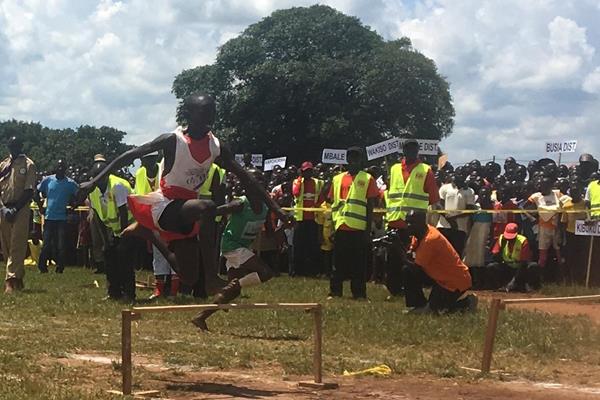 IAAF – Sports can play a role in achieving development goals and supports children and young people in their development. The German Federal Ministry for Economic Cooperation and Development (BMZ) and the German Olympic Sports Confederation (DOSB) have now kicked off a project in Uganda in cooperation with local partners that puts this approach into practice.

On 10 May 2018 the Athletics for Development project was officially launched by Uganda’s Minister of Education and Sports and First Lady Janet Kataaha Museveni, at the National Primary Schools Athletics Championships in Apac, Uganda, in the presence of several thousand children, young people and numerous guests.

“Athletics when entrenched in Uganda society, especially among young people, is a practical and sustainable tool to promote cohesion and inclusion,” the Minister of Education and Sports said.

“Traditional games also continue to define our rich cultural heritage through inherent movement abilities and salient life values and skills which form a backbone for holistic personal and national development.”

The event was also attended by Olympic fencing champion and Sport for Development Ambassador Britta Heidemann.

“Being an athlete myself, I know how much sports can do to support children and young people in their personal development,”Heidemann said. “Sport helps to build motor skills, endurance and discipline. It also teaches important values such as respect, team spirit and fair play. That is why I actively support efforts to use athletics to promote development in Uganda.”


Dr Gerd Müller, Federal Minister for Economic Cooperation and Development, is deeply committed to using sports as a tool in development cooperation.

“Sport brings people together across ethnic, linguistic and cultural boundaries,” Müller said. “It opens doors and offers us a way to reach out to disadvantaged children and youths, who otherwise would be difficult to reach. That is why the Athletics for Development project can make a valuable contribution to social development in Uganda.”

Athletics for Development in Uganda is being implemented by Gesellschaft für Internationale Zusammenarbeit (GIZ) and the DOSB in cooperation with the IAAF, the German Athletics Association (DLV), Uganda Olympic Committee (UOC) and the Uganda Paralympic Committee (UPC) on behalf of the BMZ. The Ugandan Ministry of Education and Sports, headed by the First Lady, has agreed to be the political project-executing agency.

“Sport is the hidden social worker in all our communities providing health and fitness benefits as well as life skills,” said IAAF President Sebastian Coe. “The IAAF is committed to developing the sport of athletics across the continent and across the world, particularly amongst young people because we believe that if primary school children are exposed to sport at an early age, sport will be a habit that will stay with them for life.”

“We would like to thank the German Government for providing the funds to launch this pilot and the Ugandan Government who have shown determination to drive the sport of athletics through primary schools as part of sport and life skills development. We look forward to watching the progress of the pilot and helping to expand it across the East African Community,” added Coe. 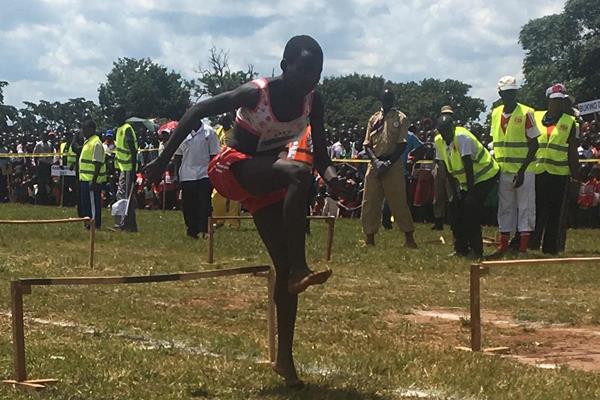 At the Athletics for Development project launch in Apac, Uganda (Günter Lange ) © Copyright

By engaging disadvantaged children and young people in the athletic disciplines of running, jumping and throwing the project aims to support their personal development, enhance social cohesion in local communities and promote health, education and inclusion through sports activities. Based on the IAAF’s Kid’s Athletics Programme, which is run in more than 130 countries worldwide, a more development policy oriented approach will be drawn up over the next few months and trainers will be trained to design sports activities following the Athletics for Development approach.

“Athletics is especially suited to being used as an instrument in development cooperation. It takes little material to reach a large number of participants,” said Alfons Hörmann, President of the German Olympic Sports Confederation. “Together with the BMZ we want to ensure that as many young people in Uganda as possible can access the social and educational benefits of sports.”

The new project is met with much anticipation in Uganda. Numerous local media have covered the official launching ceremony, which was also attended by the German Ambassador to Uganda, Albrecht Conze; Ugandan Olympic and world champion Stephen Kiprotich; and, on behalf of the IAAF, Lt. Gen (Rtd) Jackson Tuwei, CAA Region 4 President, CAA Council Member and Athletics Kenya President.

The project in Uganda is part of a broader cooperation arrangement between the BMZ and the DOSB. Under the Sport for Development initiative the BMZ, GIZ and the DOSB are running projects together to support children and young people in their development in developing countries and emerging economies. The focus of these efforts is to promote positive health outcomes of physical exercise and how using sports as a tool to promote values such as respect, fair play and team spirit, provides incentives for education and makes a contribution towards achieving the United Nations Sustainable Development Goals. Sports activities are a good medium for imparting knowledge about peacebuilding, environmental protection, gender equality and health issues.

Germany has been using the Sports for Development approach in its development cooperation measures in 16 partner countries worldwide since 2013. Projects in cooperation with the DOSB are currently being run in Namibia, Jordan and Turkey.