UGANDA: 2021 elections in doubt as opposition bigwigs meet over “plan B” to end Museveni’s dictatorship 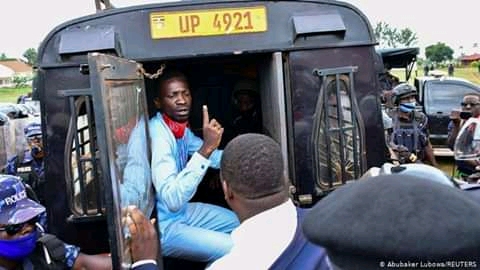 At least five presidential candidates or their representatives have convened a meeting to discuss ‘Plan B’ measures as an alternative means to end Museveni’s dictatorial administration following November 18 violence that erupted after the arrest of National Unity Platform leader Robert Kyagulanyi aka Bobi Wine and Patrick Oboi Amuriat of Forum for Democratic Change[FDC].

Kyagulanyi was arrested from the Eastern district of Luuka on Wednesday 18 with his counterpart – Amuriat violently arrested in Gulu on the same day.

Amuriat was released later in the night after refusing to record a statement, while Bobi Wine remains held at Nalufenya police station in Jinja.

Major opposition presidential candidates have cancelled their campaigns in protest against the regime’s clamp down on dissenting voices.

It has also emerged that a meeting of opposition politicians has discussed a plan akin to that touted by opposition strongman Dr Kizza Besigye.

After the November 19 morning meeting, Mao revealed that the opposition political leaders “held consultations and agreed that we have to take steps to ensure credible elections, defend the rights of fellow candidates from the democracy seeking camp, combat police brutality and generally stop the madness on our streets by proposing a plan that will assure citizens that there’s an alternative to the discredited status quo.”

The politicians also agreed on the need to stop bloodletting. Although police put the number of those killed in Wednesday protests at three, reports indicate that the mortuary at the Mulago National Referral Hospital had received at least 16 bodies by Wednesday morning.

“Let’s stop the violence and bloodshed. The NUP Presidential Candidate must be freed immediately. There is more at stake than who becomes the next president. The whole future of Uganda is at stake. Guardians of the law are lawless. Citizens are turning on each other rather than to each other,” noted Mao.

“Riots by unruly mobs and the killing of unarmed civilians are not the answer to our current predicament. Stigmatization of entire political groups and heaping collective guilt on all for the crimes of a few is totally unacceptable.”

The presidential candidates also agreed that “the lives of innocent civilians are more important than an empty ritual purporting to be an election.”

“We have to engage with EVERYBODY to restore sanity in our country. Let us come together to break the cycle of violence in our country,” added Mao.

The leaders, seeking to end Yoweri Kaguta Tibuhaburwa Museveni’s quest to extend his rule to four decades, are expected to hold more meetings to discuss practical ways of working together.

Meanwhile, in Jinja, fresh protests have erupted following the delayed release of Robert Kyagulanyi from the police detention where he has been held since Tuesday.

The presidential hopeful was expected to be arraigned before court in Iganga but the long wait by party members didn’t pay off as security reportedly kept tossing them untill the end of the day.

NUP parliamentary candidate for Buzaaya County Sharon Taliyiwula told this website that efforts by party officials to speak to Mr Kyagulanyi were frustrated despite the fact that they had camped at the Nalufenya detention facility since the Wednesday arrest.

In frustration, angry supporters took to the streets Thursdays evening in a second wave of protests with fresh calls demanding the unconditional release of Mr Wine.