TV Goes To the Moon! (PHOTOS)

This guest post is by Dorinda Hartmann, viewing technician in the Moving Image Research Center.

In 2019, we have nearly immediate access to many of the activities of Earth’s astronauts, from NASA’s live-stream of the Earth from space to interviews with the crew of the International Space Station from orbit, widely available at any time.

But fifty years ago, when people on earth wanted to experience the first moon landing as it happened, they turned to broadcast outlets like live network television. And while certain moments such as the first step onto the surface of the moon were recorded for posterity, there were also hours and hours of linked programming (and advertising) surrounding, contextualizing, and commenting on these events—what has been called the “flow” of television.[i]

If you don’t have a kinescope (a film taken of a broadcast monitor) or a reel-to-reel video recording of the many broadcasts surrounding the Apollo 11 mission, what is a researcher to do?

Well, broadcast networks also left many valuable paper records of their programming, both before and after the fact. The Moving Image Research Center at the Library of Congress is a great resource for researching some aspects of live television events like the moon landing from a network’s side of things.

Here in the Moving Image Research Center, we have bound volumes of the NBC Television Press Releases from 1951 to 1989, containing material written and distributed by the Press Department of the National Broadcasting Company. The volume for July 1969 is bursting with programming about space travel in general and the moon landing in particular: plans, schedules, revisions, recaps, ratings.

For instance, here are two pages from the extensive list of NBC News special programming planned around the Apollo 11 mission, including continuous coverage from Sunday noon until Monday evening:

Later pages in the volume added or revised this schedule as times and plans changed—would “Daniel Boone” be joined in progress, or pre-empted entirely?—and then afterward, the continuous coverage was summarized in a multi-page report, including the names and locations of various commentators:

The live broadcasts are summarized in more detail in the NBC Television Program Analysis files, held on microfiche, roughly transcribing what actually went out on the air. We discussed these files in more detail last year, in our blog post “NBC Television in Black & White”.

In the program cards on Apollo 11, commentators are quoted or paraphrased, and filmed segments are noted as such. Also, notice the mention of commercials—when they ran, for which company or product, and for how long—an artifact of broadcast television that can be hard to find in retrospect: 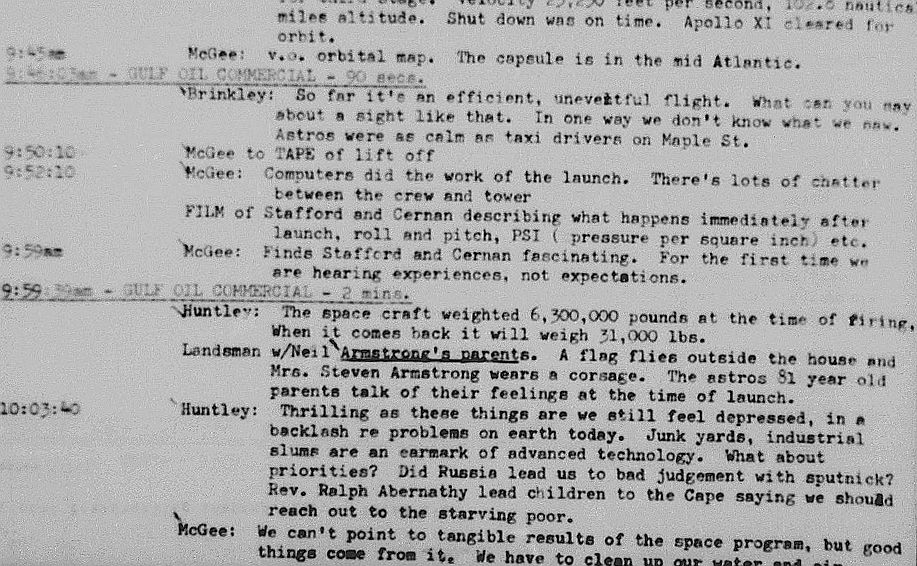 Some of the summaries are of events that were also recorded, which makes for an interesting comparison of the spoken words and the jotted cards—as for instance in a pre-mission press conference with the Apollo 11 astronauts, an event preserved in a NASA recording, and recently re-enacted in the feature film First Man (Universal Pictures, 2018). 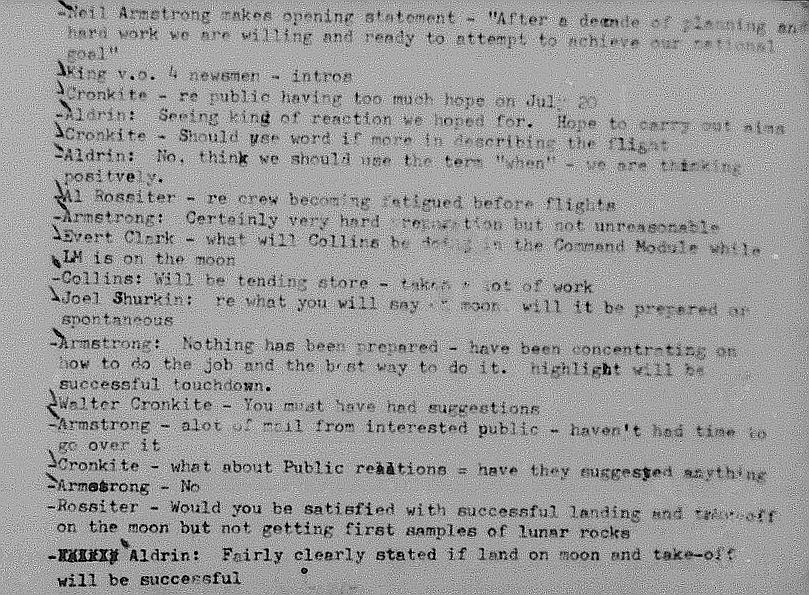 The moments of the actual landing, and the first steps onto the moon, are highlighted with dramatic underlining and very specific time-stamps. The descriptions also carefully note when source was audio-only, and when there were visuals: 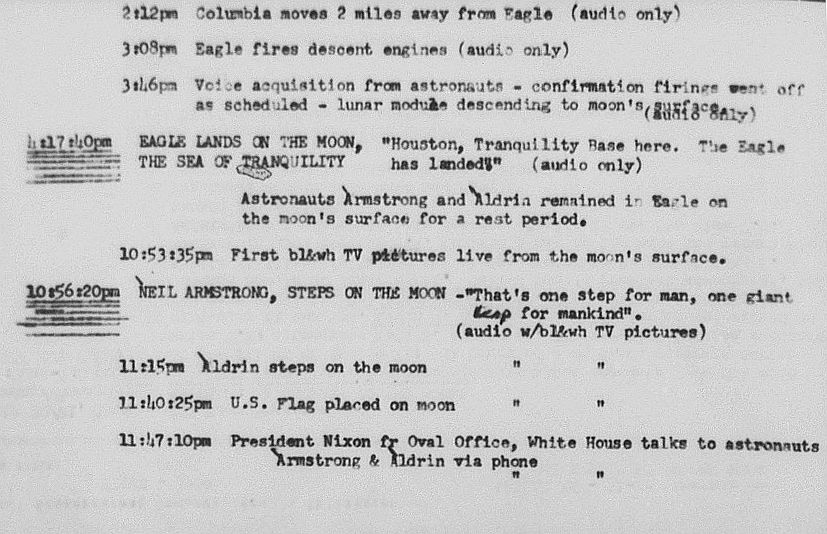 Notice that while the word “leap” was hand-printed in to Armstrong’s famous quote, the first part of the quote was transcribed with a slight error. So if these cards were the only existing record of the first words on the moon, we might remember the “One small step” a little differently.

Careful records of everything broadcast for the entire day were also kept in the NBC Television Master Books, from the television station WNBT/WNBC. These contain daily program logs, program scripts, commercial scripts, advertising copy, news copy, telecast reports, and in some instances, master music sheets, which list the musical contents of programs.

These pages from the Master Book section for July 21, 1969, include: 1) a handwritten report for “Apollo Special/Moon Landing”, with lists of locations and segments, names and roles of guests, and scheduled times for the lunar liftoff and docking. And 2) a typed page detailing the news from 7 to 8pm, listing a mixture of taped segments (using the abbreviation SOT for Shot On Tape), filmed segments (using the abbreviation SOF for Shot On Film), and live announcers.

Here in the Moving Image Research Center we can also provide access to the Vanderbilt Television News Archive, which contains actual recordings of evening newscasts on the major U.S TV networks beginning in August, 1968, plus some other broadcasts as available, including commercials. 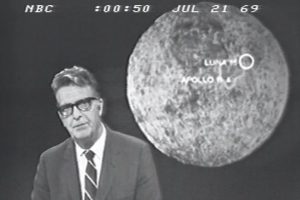 Through Vanderbilt, you can see ABC’s Frank Reynolds musing on the question of what Neil Armstrong might say when he steps onto the moon, or Chet Huntley on NBC discussing the crash landing of the unmanned Soviet Luna XV spacecraft onto the moon, only hours before the U.S. astronauts were scheduled to lift off from the moon for their return to Earth.

Even though much of live TV has disappeared into the ether, with these kinds of resources you can begin to reconstruct the flow of a broadcast television day—including that day fifty years ago, as we waited and watched to see humanity take its first steps on another world.

Researchers can access any of this material in the Moving Image Research Center. As always, don’t hesitate to get in touch through Ask a Librarian if you have questions about moving image or recorded sound research at the Library of Congress.

[i] First formulated by Raymond Williams in his 1974 book Television: Technology and Cultural Form.