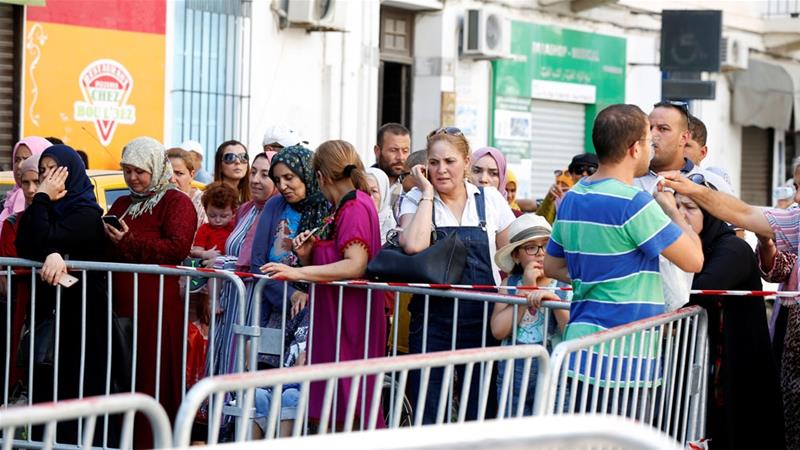 The Tunisian government has declared seven days of mourning following the death of Beji Caid Essebsi, the country’s first democratically elected president, as condolences poured in from the region and beyond.

In a ceremony hours after the death of the 92-year-old leader on Thursday, Mohamed Ennaceur, the head of parliament,was sworn in as interim president.

Ennaceur, 85, will lead the country until presidential elections are held on September 15, according to the Independent Electoral Commission. The presidential vote was originally scheduled for November 17.

Prime Minister Youssef Chahed declared a seven-day mourning period and ordered flags at state institutions to be lowered to half-mast.

State news agency TAP reported that cultural and sports events have been halted in the country until further notice.
Transition to democracy

One of the world’s oldest leaders, Essebsi died on Thursday morning at the Tunis military hospital, where he was taken the night before. It was the third time in recent weeks that he had been hospitalised.

His funeral has been planned for Saturday.

Essebsi was seen as a unifying figure but was ultimately unable to bring prosperity or lasting calm to a country beset by economic crises and fending off sporadic deadly attacks.

As prime minister, he helped draft a new democratic constitution guaranteeing fundamental rights such as freedom of speech and preparing Tunisia for free elections.

He also co-brokered an historic power-sharing deal between his Nidaa Tounes movement and Islamist party Ennahda that helped to steady the country, as other parts of the region such as Syria, Yemen or Libya struggled with upheaval and violence.

In recognition of their role, Tunisian civil society groups won the Nobel Peace Prize in 2015.

Though Tunisia remained a democratic exception in a troubled region, critics accused Essebsi of attempting a dynastic handover to his son, rowing back on some post-revolution freedoms, and failing to support a truth commission seeking justice for the victims of authoritarian rule.

Essebsi recently announced he would not run in the election scheduled for November, saying a younger person should lead the country.

Concerns had been growing about a potential power vacuum in Tunisia before the November elections after the president’s admissions to hospital.

Tunisia’s constitution, adopted in 2014, provides two measures in such a case.

The prime minister can take over the president’s responsibilities for a period of no more than 60 days. If the vacancy is longer, the speaker of parliament is tasked with the role for up to 90 days.

In both cases, the decision must be taken by a constitutional court after it validates the president’s incapacity.

But eight years after the Arab Spring, Tunisia has yet to set up a constitutional court, raising questions about the legitimacy of Ennaceur assuming the presidency.

“The president has been unwell for almost a month now, so for the last few weeks there was a lot of discussion inside the corridors of the presidency, the parliament, the prime minister’s office to find a way without having a constitutional court,” Youssef Cherif, deputy director at Columbia Global Centers, said from Tunis.

Parliamentary elections are scheduled to take place on October 6. They will be the third set of polls in which Tunisians have been able to vote freely following the 2011 revolution.

Commenting on Essebsi’s legacy, Sami Hamdi, editor-in-chief of the United Kingdom-based International Interest magazine said: “Tunisia is still faring far better than Libya, Syria and the like in the sense that it has avoided war. However, this is not to deny that Tunisia is going through a very bad economic crisis. There is still incredible class divides and poverty.”

Unemployment in Tunisia stands at about 15 percent up from 12 percent in 2010, due to weak growth and low investment.

Tunisia has been spared much of the violence seen elsewhere in the Middle East since 2011, although it has been the target of fighters from the Islamic State of Iraq and the Levant (ISIL or ISIS) over the years.

“We have seen the return of lobby groups, business interests and foreign intervention,” Hamdi said. “Nevertheless there is still a belief that in 2019 all hope is not lost, that there is still some sort of democratic process.”
International reaction

Messages of condolences poured in following the announcement of Essebsi’s death. Chahed, the prime minister, said the late president had “a pivotal role in the success of the democratic transition.”

Rached Ghannouchi, the head of the Islamist Ennahda movement, expressed his sorrow for Essebsi’s death, saying he had made significant contributions to building the state.

“I wish Allah’s mercy upon him and extend my condolences to the brotherly people of Tunisia,” Erdogan said in a statement, adding that the late president will always be remembered with respect.

French President Emmanuel Macron paid tribute to Essebsi as a “courageous leader who presided over his country at an essential moment in its history.”

The late president had “resisted all forms of obscurantism to build the future, democracy, and progress,” Macron said in a statement.

Italian Prime Minister Giuseppe Conte, on Twitter, saluted Essebsi as “a man and statesman with great political experience and humanity, who served his country throughout his life” and expressed “sincere condolences to his family and all of Tunisia”.

Tunisia lost one of its most “competent” and “courageous” leaders, EU foreign policy chief Federica Mogherini said in a statement.
=====

Mohamed Ennaceur (Arabic: محمد الناصر‎; born 21 March 1934) is a Tunisian politician, who became Acting President of Tunisia 25 July 2019 upon the death of President Beji Caid Essebsi. Since 2014 he has been the President of the Assembly of the Representatives of the People and leader of the governing Nidaa Tounes party. Previously he served as Minister of Social Affairs in the 1970s and 1980s under President Habib Bourguiba, and again in 2011 in the transitional Ghannouchi and Essebsi governments.

On 4 December 2014, he was elected as President of the Assembly of the Representatives of the People with 176 yes votes out of 214 present MPs.[3] Since President Beji Caid Essebsi‘s death, he has been acting as Tunisia’s president and head of state, according to the Constitutional provision for presidential succession.[4] According to Article 84 of the Tunisian constitution, an interim president may serve in their role for a maximum of 90 days, meaning Ennaceur’s role is due to expire on 23 October 2019.[5][better source needed]

Mohamed Ennaceur earned a diploma from the Institut des Hautes Études de Tunis and a doctorate in social law from the University of Paris 1 Pantheon-Sorbonne. His thesis dealt with the International Labour Organisation and the development of social law in Tunisia and Libya.[2]

Early in his career he served on the board of UNICEF (1963-64) and the United Nations Research Institute for Social Development(1966-72). He was Commissioner-General of the Office for Tunisian Workers Overseas (1973-4), chaired the World Employment Conference (1976) and the Arab League Social Affairs Bureau (1980-83). Between 1991 and 1996 he went on to serve as coordinator of the African group in the World Trade Organisation and led the Tunisian permanent mission to the United Nations in Geneva. From 2000 he worked as a corporate social responsibility auditor and international consultant. In 2005 he became the coordinator for the United Nations Global Compact in Tunisia.[6][2]

In addition to his international career, Mohamed Ennaceur held a number of political appointments in Tunisia. He served as governor of Sousse 1972-73 and as Minister of Social Affairs twice, from 1974-77 and from 1979-85.[2] After the Tunisian Revolution of 2011 he was once again appointed Minister of Social Affairs in the governments of Mohamed Ghannouchi and Béji Caïd Essebsi.

In February 2014, he joined the Nidaa Tounes party, becoming its Vice-President.[7] On 4 December 2014, he was elected President (Speaker) of the Assembly of the Representatives of the People, securing 176 votes out of a possible 217, and becoming the first President of the Chamber after the adoption of the Tunisian Constitution of 2014.[8] On 31 December, after Béji Caïd Essebsi became President of the Republic, he succeeded him as interim head of the Nidaa Tounes party.[9]