Trump’s Son Was Told Russia Sought to Hurt Clinton, Emails Show.  Donald Trump Jr. released emails he exchanged ahead of a meeting with a Russian lawyer last year that said the Russian government backed his father’s presidential campaign and was trying to damage his opponent, Hillary Clinton. 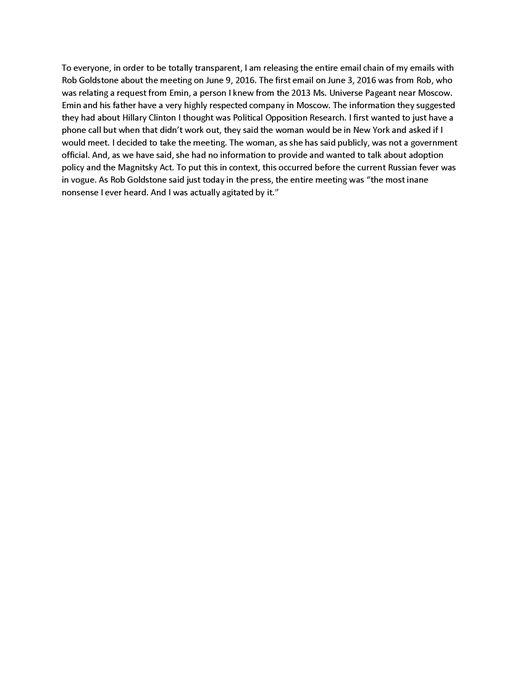 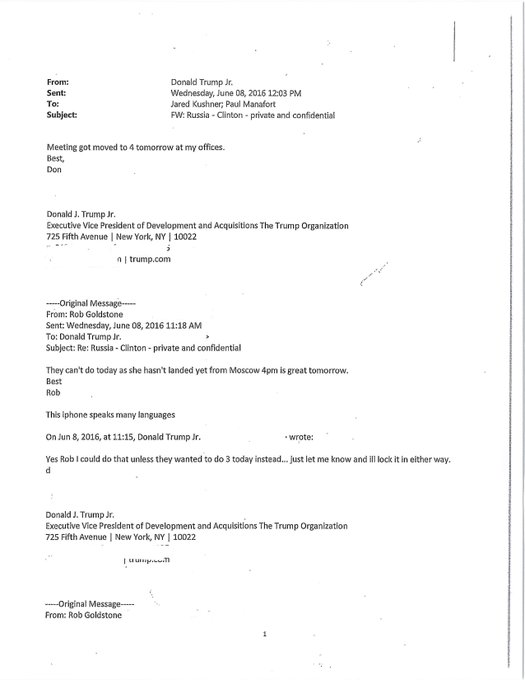 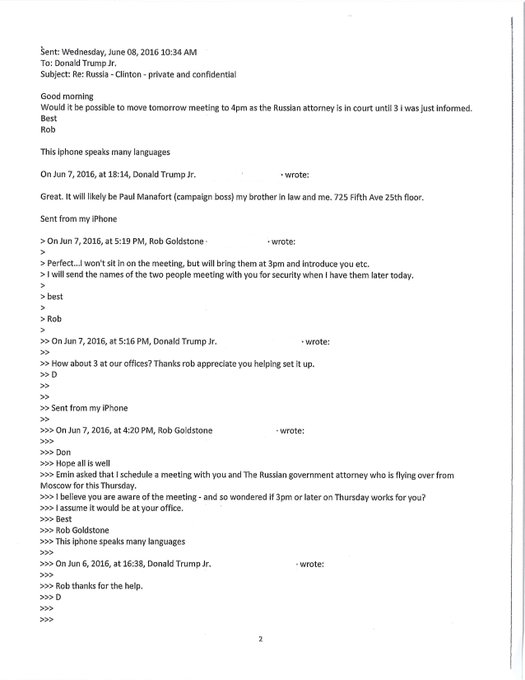 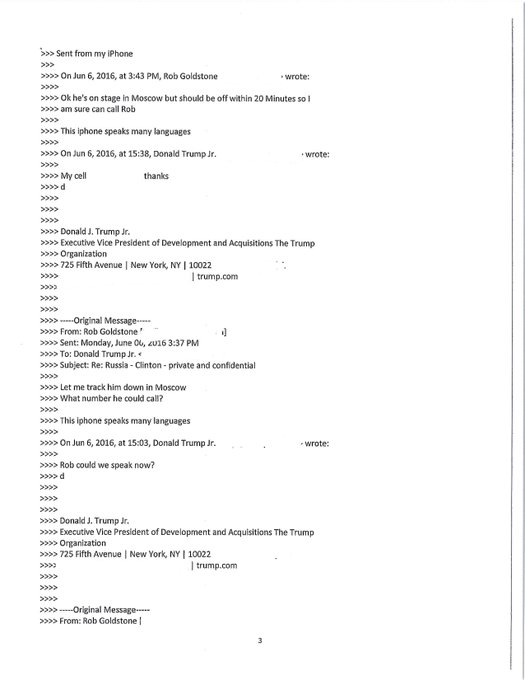 Here’s my statement and the full email chain 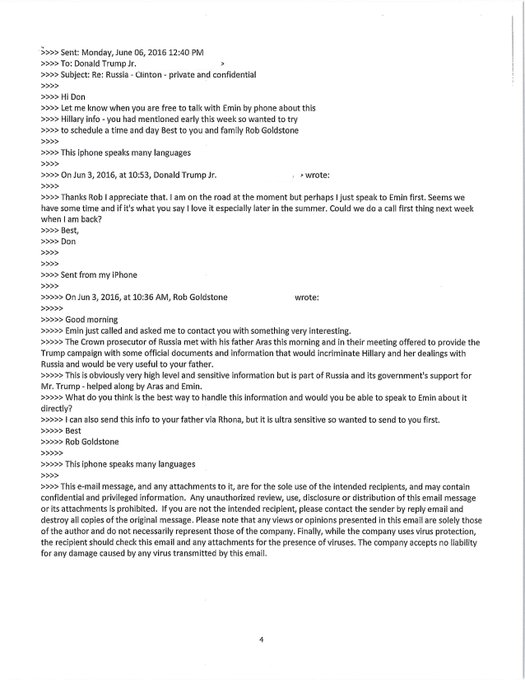 The information came from Rob Goldstone, a former British tabloid journalist and marketing executive linked to Trump through the Miss Universe Pageant, who was brokering a meeting with the lawyer, Natalia Veselnitskaya. Donald Trump Jr. posted the entire correspondence on his Twitter account on Tuesday after a series of reports on the meeting by the New York Times and others.

Goldstone wrote that the “Crown prosecutor of Russia” had “offered to provide the Trump campaign with some official documents and information that would incriminate Hillary and her dealings with Russia and would be very useful to your father.”

“This is obviously very high level and sensitive information but is part of Russia and its government’s support for” Donald Trump’s White House bid, Goldstone wrote. It is not clear from the emails that Trump posted how Goldstone knew the information came from the Kremlin.

Donald Trump Jr. said in a statement that he had released the emails “in order to be totally transparent” about the June 9, 2016 meeting. “The information they suggested they had about Hillary Clinton I thought was Political Opposition Research,” Trump said.

The younger Trump’s decision to meet with the Russian lawyer in expectation she would provide damaging information on Clinton may now draw him into special counsel Robert Mueller’s probe of Russian meddling into the 2016 campaign. Senators on the Intelligence Committee, which is also examining Russian interference in the election, have also said they’ll seek to speak with Donald Trump Jr. about the meeting.

Alan Futerfas, a New York criminal defense attorney retained by the younger Trump, called the New York Times reports on the meeting “much ado about nothing.” The Times first reported the meeting on Sunday and first reported on the communications with Goldstone on Monday.

“Don Jr. had no knowledge as to what specific information, if any, would be discussed” int he meeting, Futerfas said in an email Monday evening. He said there was no commitment made about accepting or using the information and that after the 20- to 30-minute meeting “nothing came of it.’’

Veselnitskaya told NBC News in an interview that aired Tuesday that she never worked for the Russian government and had no damaging information about Clinton.

“It’s quite possible that maybe they were looking for such information, they wanted it so badly,” Veselnitskaya said. “I did not have Clinton info they wanted.”

But that short encounter — which also included then-campaign manager Paul Manafort and Trump Jr.’s brother-in-law Jared Kushner — has focused attention on the president’s son as several congressional committees and a special counsel examine possible ties between Russian election meddling and the Trump campaign.

White House officials said they realize it was unwise for three top-tier managers on the campaign to have agreed to meet with Veselnitskaya, two people familiar with the matter said. They said they expect more trouble is coming, especially for Kushner, the only one of the three who transitioned from the campaign into the West Wing.

The White House plan for this week was to focus on nominations. Trump stuck to that script on Monday and in his first tweets of the day on Tuesday.

Meanwhile, Donald Trump Jr. is facing two complaints from watchdog groups of possible violation of election laws that prohibit campaigns from knowingly accepting from a foreign national money, contributions or any “other thing of value.” That could include information or opposition research, election lawyers said.

Senator Susan Collins, a Maine Republican on the Intelligence Committee, said the panel should interview the younger Trump as part of its investigation of Russian interference in the campaign.

“This is the first time that the public has seen clear evidence of senior level members of the Trump campaign meeting with Russians to try to obtain information that might hurt the campaign of Hillary Clinton,” said Senator Mark Warner, the top-ranking Democrat on the intelligence panel. “Rest assured, Donald Trump Jr. will be somebody that we want to talk to.”

Trump Jr. has said he is open to speaking with the intelligence panel and Futerfas said, “We will work with any committee or office to convey what he knows.”

“The bottom line is that Don, Jr. did nothing wrong,” Futerfas said. “I have been representing people in investigatory matters for almost 30 years, and I see nothing here.’’

Attempts to contact Veselnitskaya and Goldstone were unsuccessful. Goldstone represented Emin Agalarov, an Azerbaijani singer who is popular in Russia. Scott Balber, a lawyer for Agalarov, confirmed that Agalarov facilitated the meeting with Veselnitskaya, “an acquaintance” of the singer.

The president and his top lieutenants, including Vice President Mike Pence, have previously denied there were any meetings between his campaign and Russians. Their argument now is that the meetings weren’t out of the ordinary. The younger Trump responded with a sarcastic Twitter post earlier Monday, before the New York Times report.

“Obviously I’m the first person on a campaign to ever take a meeting to hear info about an opponent,” Donald Trump Jr. said in the post. “Went nowhere but had to listen.”

Lawyers and Republican campaign operatives say there is nothing routine about foreigners meeting with a campaign on such matters — and in particular with top campaign officials. Presidential campaigns typically would have an entire department dedicated to vetting venues, surrogates and meetings for political risks, as well as a chain of command to prevent freelancing and scheduling mistakes, said Kevin Madden, a former spokesman for Republican Mitt Romney’s 2012 presidential campaign.

“A foreign source, or someone with a questionable background, approaching a campaign with a proposal would ideally receive a caution flag if those vetting and chain of command protocols are in place,” he said in an email.

While the Trump campaign was always a lean operation compared to a traditional presidential campaign, by the time the meeting took place in June, Trump had all but secured the Republican nomination and was gearing up for the general election.

A foreign national offering dirt on a political opponent should raise loud alarms, said one top Republican operative who asked not to be identified criticizing the Trump campaign. The person said it was not believable that Donald Trump Jr., his brother-in-law and Manafort would enter into such a meeting without even knowing the person’s name. The younger Trump said in his statement Sunday he wasn’t told Veselnitskaya’s name prior to the meeting.

The watchdog group Common Cause filed a complaint with the Justice Department and the Federal Election Commission on Monday alleging that Donald Trump Jr. “in his role with the Trump campaign, illegally solicited a political contribution from a foreign national — in the form of opposition research he believed would be damaging to the Hillary Clinton campaign.”

The Campaign Legal Center, another watchdog group, said it would file a similar complaint on Tuesday. “There’s certainly strong enough evidence to open up an investigation,” Brendan Fischer, director of federal and FEC reform for the group, said in an interview.

Fischer said it seems likely the younger Trump wouldn’t have invited Kushner or Manafort to the meeting if he didn’t think Veselnitskaya’s information was of value.

Kate Belinski, an election lawyer with Nossaman LLP, said she thinks the complaints are unlikely to succeed. FEC rules allow foreign nationals to volunteer their services to campaigns, she said, and Veselnitskaya offered the information to Trump’s campaign. According to his son’s statement, the campaign didn’t find it credible. “Can you solicit something that doesn’t exist?” she asked.

Another hurdle is whether negative information on an opponent has monetary value.

“I’ve never seen a matter where the FEC has actually quantified the value of opposition research,” said Belinski, who served as senior counsel at the agency. “It’s difficult to say that this piece of dirt was clearly worth $10,000.”

“It is possible that a court could find that Donald Jr. solicited or accepted information, that was of value to the campaign, from a foreign national,” said Joshua Douglas, an associate professor of law at the University of Kentucky. He added though it would have to be proven that he solicited the information and it wasn’t provided unexpectedly.

Campaigns are often inundated with people offering to provide them research on their opponent, which campaign officials feel they have a duty to at least listen to and then research further if they think it is something that could be of use.

“It would be campaign malpractice not to listen to someone who would have some info that might be beneficial to the campaign, that doesn’t mean you go off and run with it, but there is a responsibility to listen to people who have information relevant to a campaign,” said John Brabender, who has worked as a Republican campaign consultant for more than 30 years.

“We don’t know who this is and, of course, we can’t keep track of the meetings of all Russian lawyers either in Russia or abroad,” Putin’s spokesman, Dmitry Peskov, told reporters Monday on a conference call, when asked about Veselnitskaya.