Trump rejects criticism that his weekend tweet about four minority lawmakers was racist, says they ‘hate our country’ 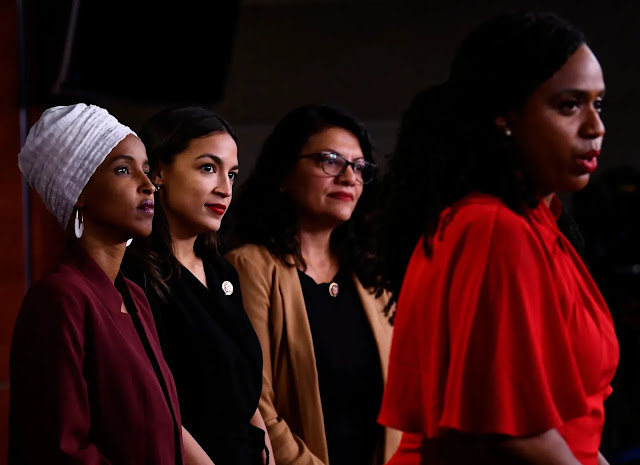 ‘They hate our country’: Trump on minority congresswomen

President Trump said Monday that he is not concerned by criticism that his tweets suggesting four minority congresswomen return to their home countries were racist, asserting that they hate the United States and are free to leave.

His comments at a White House event came as Democratic leaders in the House prepared a resolution condemning tweets over the weekend in which Trump said the liberal lawmakers critical of him should “go back and help fix the totally broken and crime infested places from which they came.”

In a letter to Democratic colleagues, House Speaker Nancy Pelosi (D-Calif.) said Trump had gone “beyond his own low standards using disgraceful language about Members of Congress” and that Democrats would “forcefully respond to these disgusting acts.”

Trump expressed no regrets at a White House event to celebrate American-made products when asked by reporters if he were concerned by widespread criticism that his tweets about the lawmakers were racist.

“It doesn’t concern me because many people agree with me,” Trump said. “And all I’m saying — they want to leave, they can leave.”

Trump’s tweets targeted a group of liberal freshmen who have been feuding with Pelosi, including Reps. Ayanna Pressley (Mass.), Rashida Tlaib (Mich.), Alexandria Ocasio-Cortez (N.Y.) and Ilhan Omar (Minn.). All are U.S. citizens, and only Omar was born outside the United States.

Trump said at the White House event that all four have been “complaining constantly” about the United States.

A House vote rebuking Trump’s tweets targeting the four lawmakers known as the “Squad” could unify a Democratic caucus that has been frayed by tensions between the group and Pelosi.

And it would also put Republicans on record about Trump’s comments. Congressional Republicans were largely silent on Sunday after his initial tweets — with some fearful of chastising a president popular with the GOP base — although some began speaking out critically on Monday.

Trump doubled down on his weekend tweets early in the day Monday, saying that the congresswomen should apologize to the United States and Israel, as well as to him.

Trump on minority congresswomen: ‘If they don’t like it here, they can leave’

President Trump defended on July 15 a tweet were he said four liberal congresswomen of color should “go back” to their home countries. (Reuters)

Tweeting from the White House, he employed a tactic he has used before: accusing his opponents of the same transgressions for which they have criticized him.

“When will the Radical Left Congresswomen apologize to our Country, the people of Israel and even to the Office of the President, for the foul language they have used, and the terrible things they have said,” Trump wrote. “So many people are angry at them & their horrible & disgusting actions!”

He later criticized Democrats for coming to the defense of the congresswomen, whom he claimed had shown “racist hatred” in their speech and are “very unpopular & unrepresentative.”

[Trump tells four liberal congresswomen to ‘go back’ to their countries, prompting Pelosi to defend them]

All four lawmakers targeted by Trump have called for his impeachment — Tlaib has done so using profane language — and have been highly critical of his administration, notably denouncing conditions at federal detention facilities near the U.S.-Mexico border.

Trump’s comments regarding Israel appeared to target Omar and Tlaib.

Earlier this year, Omar apologized after she was widely accused of anti-Semitic speech for suggesting that supporters of Israel’s government have an “allegiance to a foreign country.”

Tlaib, the daughter of Palestinian immigrants, has advocated what has been dubbed a “one-state solution” to the Israeli-Palestinian conflict. Arguing that the Israeli government of Prime Minister Benjamin Netanyahu effectively opposes a two-state solution — meaning establishment of a Palestinian state alongside Israel — she has supported the transformation of Israel into a single, jointly governed Arab-Jewish nation. But the idea has little support among either Israelis or Palestinians.

When will the Radical Left Congresswomen apologize to our Country, the people of Israel and even to the Office of the President, for the foul language they have used, and the terrible things they have said. So many people are angry at them & their horrible & disgusting actions!— Donald J. Trump (@realDonaldTrump) July 15, 2019

If Democrats want to unite around the foul language & racist hatred spewed from the mouths and actions of these very unpopular & unrepresentative Congresswomen, it will be interesting to see how it plays out. I can tell you that they have made Israel feel abandoned by the U.S.— Donald J. Trump (@realDonaldTrump) July 15, 2019

Ocasio-Cortez went on Twitter to denounce Trump shortly after his latest tweets.

“It’s important to note that the President’s words yday, telling four American Congresswomen of color ‘go back to your own country,’ is hallmark language of white supremacists,” she wrote. “Trump feels comfortable leading the GOP into outright racism, and that should concern all Americans.”

Trump’s tweets on Sunday morning were sent before he headed to his golf club in Sterling, Va.

“So interesting to see ‘Progressive’ Democrat Congresswomen, who originally came from countries whose governments are a complete and total catastrophe, the worst, most corrupt and inept anywhere in the world (if they even have a functioning government at all), now loudly and viciously telling the people of the United States, the greatest and most powerful Nation on earth, how our government is to be run,” Trump tweeted.

“Why don’t they go back and help fix the totally broken and crime infested places from which they came,” Trump added. “Then come back and show us how it is done.”

Pressley was born in Cincinnati, Tlaib was born in Detroit, and Ocasio-Cortez was born in New York. Omar was born in Mogadishu, Somalia; her family fled the country amid civil war when she was a child, and she became a U.S. citizen as a teenager.

By Sunday evening, at least 90 House Democrats, plus Rep. Justin Amash (I-Mich.), had denounced Trump’s remarks, with more than half of them using the words “racist” or “racism” to describe his tweets.

The only Republican member of Congress to speak out against Trump on Sunday was Rep. Chip Roy (R-Tex.), who wrote on Twitter that “POTUS was wrong to say any American citizen, whether in Congress or not, has any ‘home’ besides the U.S.”

A few other Republicans were critical of Trump’s tweets when asked about them on Monday.

“We don’t respond to everything that’s out there,” he said when asked about the relative silence from GOP lawmakers. “But I would imagine, I would know, that a good number of my Republican colleagues don’t appreciate the comments as well. And actually if you look at the facts . . . three of the four were born in this country, so it makes no sense.”

During a television appearance Monday morning, Sen. Lindsey O. Graham (R-S.C.) counseled Trump to focus on policy differences with the congresswomen rather than on them personally.

“Aim higher. They are American citizens. They won an election. Take on their policies,” Graham said on Fox News’s “Fox & Friends.”

During the interview, Graham called the congresswomen’s ideas “anti-Semitic” and “socialist” and said their agenda is “disgusting.”

“We all know that AOC and this crowd are a bunch of communists,” Graham said, referring to Ocasio-Cortez. “They hate Israel. They hate our own country.”

Trump later tweeted selective quotes from Graham’s interview that did not include his advice to “aim higher.”

“I disagree strongly with many of the views and comments of some of the far-left members of the House Democratic Caucus — especially when it comes to their views on socialism, their anti-Semitic rhetoric, and their negative comments about law enforcement — but the President’s tweet that some Members of Congress should go back to the ‘places from which they came’ was way over the line, and he should take that down,” Collins said in a statement.

“There is no excuse for the president’s spiteful comments — they were absolutely unacceptable and this needs to stop,” she said on Twitter.

“Is the Republican silence over President @realDonaldTrump’s racism agreement or embarrassment?” he said in a tweet late Monday morning.

Meanwhile Rep. Al Green (D-Tex.) said Monday he would move forward within the next two weeks with articles of impeachment targeting Trump for racism and bigotry.

Green, who filed articles of impeachment in 2017 and has threatened for months to try again, said things “came to a boiling point” with Trump’s tweets Sunday as well as his handling of the border crisis.

“To tolerate bigotry when you can do something about bigotry is to perpetuate it,” Green said in an interview Monday. “I will not tolerate the level of bigotry emanating from the president, especially in policy.”

On Sunday night, Trump tweeted that it was “sad” to see Democrats “sticking up for people who speak so badly of our Country and who, in addition, hate Israel with a true and unbridled passion.”

He returned to that argument Monday morning.

“If Democrats want to unite around the foul language & racist hatred spewed from the mouths and actions of these very unpopular & unrepresentative Congresswomen, it will be interesting to see how it plays out,” Trump wrote. “I can tell you that they have made Israel feel abandoned by the U.S.”

Speaking to reporters at the White House on Monday morning, Marc Short, chief of staff to Vice President Pence, said: “I don’t think the president’s intent in any way is racist . . . This is not a universal statement that he is making.”

Asked about the controversy during an earlier appearance on the Fox Business Network, Short mentioned a recent naturalization ceremony at which Pence presided and that was attended by Transportation Secretary Elaine Chao, who is Asian American.

“So when people write the president has racist motives here, look at the reality of who is actually serving in Donald Trump’s Cabinet,” Short said. “He is making a point about a great frustration a lot of people feel that, I think it’s hard to find anything Ilhan Omar has actually said since elected to Congress that has been positive about the United States of America.”

Did you find apk for android? You can find new Free Android Games and apps.
Sharing is caring:
trump, world news, racism, Videos Videos, Trump, Racism, World News Comments Off on Trump rejects criticism that his weekend tweet about four minority lawmakers was racist, says they ‘hate our country’ Print this News

« SOUTH AFRICA: Former soccer player Marc Batchelor killed outside his home (VIDEO) (Previous News)
(Next News) ZIMBABWE: Annualized inflation surged to 175.66pct in June, up from 97.85pct in May »