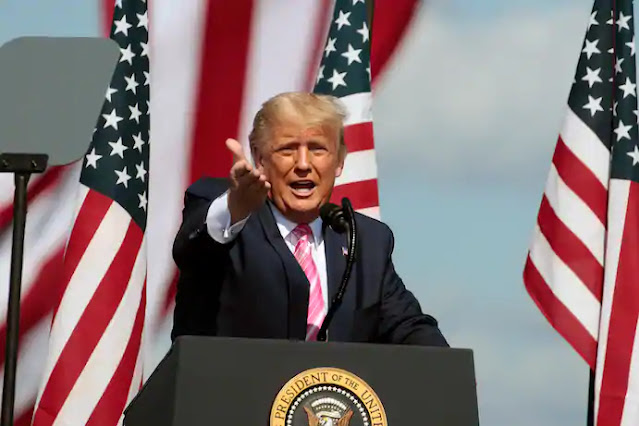 By THE WASHINGTON POST
Oct. 24, 2020 at 5:31 p.m. ADT
President Trump privately told donors this past week that it will be “very tough” for Republicans to keep control of the Senate in the upcoming election because some of the party’s senators are candidates he cannot support.

“I think the Senate is tough actually. The Senate is very tough,” Trump said at a fundraiser Thursday at the Nashville Marriott, according to an attendee. “There are a couple senators I can’t really get involved in. I just can’t do it. You lose your soul if you do. I can’t help some of them. I don’t want to help some of them.”

The attendee shared the president’s words on the condition of anonymity as the event was a closed-door gathering. It was held before the last presidential debate between Trump and Democrat Joe Biden.

The president — in a sentiment not shared by many of his party’s top officials and strategists — said he instead thinks the Republicans “are going to take back the House.” And many strategists involved in Senate races say the party’s chances at keeping the chamber are undermined by the president’s unscripted, divisive rhetoric and his low poll numbers in key states.

Jesse Hunt, a spokesman for the National Republican Senatorial Committee, pushed back on the notion that Trump doesn’t support some Senate Republicans.

“The Republican-led Senate and President Trump have had a great partnership over the last four years, highlighted by the fact the chamber is poised to confirm a third Trump Supreme Count nominee in the coming days,” Hunt said Saturday. “Nancy Pelosi has turned the House into a liberal nightmare and if Chuck Schumer gets control of the Senate, he’ll do the same thing.”

Republicans hold a 53-to-47 majority. Democrats need to gain three seats if Biden wins the presidency to claim Senate control.

The second line, which Republicans used to refer to as their “firewall,” is Sens. Joni Ernst in Iowa, David Perdue and Kelly Loeffler in Georgia, and Steve Daines in Montana.

But even the GOP’s “firewall” has started to crumble, with Republicans all but sure that they’ll be competing to win runoffs in Georgia in January, for example. Additionally, Republicans suddenly find themselves scrambling to save once safe seats, including top Trump ally Sen. Lindsey O. Graham (S.C.), who is being vastly outraised by Democratic opponent Jaime Harrison. Graham is still expected to win, according to South Carolina political observers.

The Republican Party’s donors have rallied in some places to try to save the Senate, fearful of a Democratic Party that controls the House, Senate and White House.

“Donors are increasingly alarmed that we might lose the Senate,” said Dan Eberhart, a donor who has given to an array of candidates over the years.

With Democrats vastly outraising their GOP incumbents across the nation, its seems an increasingly tough battle for Republicans. Even a late-breaking scandal enveloping one Democratic candidate, Cal Cunningham, has not doomed his candidacy; most North Carolina voters view the seat as the tipping point for Senate control.

Earlier this month, Cunningham acknowledged sending sexually suggestive texts to a woman who was not his wife. A second report revealing infidelity by the Iraq War veteran, who has held himself up as a moral leader, has taken a toll on his personal favorability ratings.

“I think Tillis is getting back in this one because his opponent ended up having more affairs than you’re allowed to have at one time,” Trump said.

Trump also said he was pleased with Tommy Tuberville’s chances in Alabama against Sen. Doug Jones (D). Republicans and Democrats expect the Republican to win the seat in the GOP-leaning state.

“We’re going to take Alabama. We got rid of Jeff Sessions. Thank goodness. He was the worst. I would have gone for the Democrat over him. That wouldn’t have been too good,” Trump said, before shifting to his mock TV anchor voice. “The president has just endorsed a Democrat.”

“You have a really good coach, a really great coach actually. Urban Meyer said not only would he be a good politician, he was a great coach. He’s the only one who beat Urban Meyer twice. That’s pretty good. We should call him sometime soon.”

Meyer also has had a long career in college football and was head coach at Ohio State.

Trump said he has been “working and calling and tweeting” for some members. Some senators have increasingly distanced themselves from Trump and his incendiary rhetoric in recent weeks.

McSally recently was evasive at a debate when she was asked about whether she is proud of her support for Trump. Sen. John Cornyn (R-Tex.) offered muted criticism of Trump’s handling of the pandemic, saying he “let his guard down” and “got out over his skis” by playing down the threat of the coronavirus.

The harshest criticism came from Sen. Ben Sasse (R-Neb.) who in a call with constituents said Trump mistreats women, flirts with White supremacy and secretly mocks evangelicals. In response, Trump lashed out at Sasse.

Not a single House Republican is predicting the party will gain seats Nov. 3. Rather, the House GOP conference is bracing for a possible internal fight over leadership if they lose seats to Democrats. GOP leader Kevin McCarthy (R-Calif.), in a recent Politico interview, tried to suggest that it wouldn’t be his fault if Pelosi (D-Calif.), the House speaker, were able to expand her majority. Other lawmakers are privately discussing whether someone should challenge McCarthy for failing to distinguish House Republicans from the top of the ticket.

At the fundraiser, Trump lamented that he could not send federal forces into some of the cities that were racked by violence and protests this summer.

“Unless it’s a strict emergency, we’re not allowed to go in. We’re going to find more and more emergencies,” Trump said.

Trump also bashed the news media, Rep. Adam B. Schiff (D-Calif.), the House Intelligence Committee chairman who led the impeachment investigation of Trump, and the obsession from some Democrats with discussing Russian disinformation — comments that closely aligned with what he has said recently at public rallies.

There were no tough questions, the attendee said. Trump was lavishly praised by those present for his work on the coronavirus pandemic, and his effort taking on the “medical swamp,” in the words of one guest.