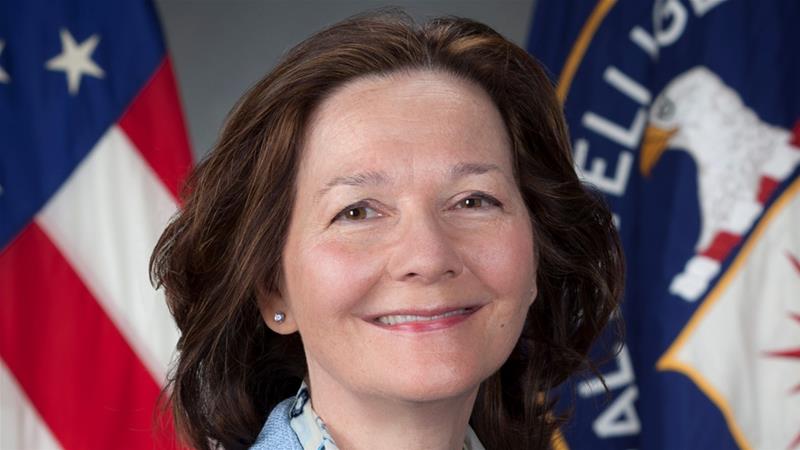 AL JAZEERA – Gina Haspel has been named by US President Donald Trump as new director of the Central Intelligence Agency, becoming the first woman to hold the post if confirmed by the Senate.

Trump announced on Tuesday that Haspel, currently the intelligence agency’s deputy director, would be replacing Mike Pompeo, who was appointed the new secretary of state after incumbent Rex Tillerson was sacked on Tuesday.

In a statement issued by Trump to the Washington Post, he said the nomination of Gina Haspel was “a historic milestone”. Speaking to reporters, the president said Haspel is “an outstanding person”.

But Haspel’s career is a point of concern with many human rights advocates. Haspel became the US spy agency’s second-in-command in February 2017, but joined the CIA as an intelligence officer in 1985.

Her former posts at the intelligence agency include deputy director of the national clandestine service for foreign intelligence and covert action.

The former Deputy CIA head has operated “black site” prisons and drafted orders to destroy evidence that would reveal torture.

“I think she’s a particularly disastrous choice, being one of the principal actors” in the torture programme of former President George W Bush, Alberto Mora, the former general counsel for the US Navy and a senior fellow at the Harvard’s Carr Center for Human Rights Policy, told Al Jazeera.
Controversial past

The New York Times reported in 2017 that Haspel played a direct role in the CIA’s “extraordinary rendition programme” through which captured fighters were abducted and tortured.

She ran the CIA’s first overseas detention site in Thailand, also known as a “black site”, in the early 2000s.

The detention centre was the place at which the the interrogations of Abu Zubaydah and Abd al-Rahim al-Nashiri, two Saudi citizens currently held in the Guantanamo Bay prison in Cuba for alleged links to al-Qaeda, took place.

The interrogations involved extensive use of “enhanced interrogation” techniques, the term used for waterboarding and other interrogation methods internationally classified as torture.

Haspel’s rise to the head of the US spy agency should cause concern, Mora said: “To hold her up as an exemplar, an individual whose career will serve as guidance to those who will join the agency in the future, is shocking”.
Evidence destroyed

A 2005 US justice department memo said Zubaydah was waterboarded 83 times in a single month in 2002.

A 2014 report by the US Senate Select Committee on Intellingence on the CIA’s detention and interrogation programme said these techniques were used on Zubaydah “with significant repetition for days or weeks at a time”.

The reports also said the techniques included slamming him against a wall, sleep deprivation and forced nudity.

Maya Foa, director of international human rights organisation Reprieve, said in a statement delivered to Al Jazeera that Haspel “is simply not fit to hold an office that requires, at its very heart, a commitment to uphold the values of the Constitution”.

Videotapes of the interrogations in Thailand were destroyed on the orders of a cable drafted by Haspel and agreed to by her former boss, then-CIA director of counterterrorism operations Jose Rodriguez.

“This is not just another political controversy. Of all the problematic nominations that have been made, this is the most problematic by far,” John Sifton, Asia Advocacy Director at Human Rights Watch, told Al Jazeera.

“Haspel is complicit in the destruction of videos of interrogations. She drafted the order to destroy the videos even after the White House instructed the CIA not to do so.

“This is a woman who has shown she is willing to break the law. That is the most disturbing thing about the nomination,” he said.

Still, Haspel enjoys widespread support from within the US intelligence community.

When she was appointed as deputy director in 2017, she was described by former Director of National Intelligence James Clapper as “a seasoned veteran of the agency who is widely and deeply respected by the workforce”.

Michael Hayden, former National Security Agency director, told US broadcaster NPR on Tuesday, “In all this turmoil, I actually think CIA is going to be a bit of a calm spot with Gina now being elevated to the director position.”

Rami Khouri, a senior fellow at the American University of Beirut, told Al Jazeera Haspel’s appointment was “in keeping” with previous actions by the Trump administration.

“This is very much in line with what we’ve seen … Appointing people in high positions who are, to say the least, controversial – not only in terms of their views but in terms of their adherence to fundamental ethics and law in the US and international law against torture,” he said.

Foa, the director of Reprieve, agreed.

The “[a]ppointment should be a warning to allies of the US in the UK, Europe and around the world to rethink their cooperation with an administration which has refused again and again to show respect for the values we all share”, Foa said.
Requested arrest warrant

The European Centre for Constitutional and Human Rights (ECCHR) in June 2017 requested that the German public prosecutor issue an arrest warrant for Haspel for her role in the torture at the black site in Thailand.

The Berlin-based organisation had asked German prosecutors to investigate torture by CIA operatives in December 2014 after publication of the CIA torture report.

“It’s a really bad sign that [Haspel] should be named as CIA director,” Andreas Schueller, the head of the ECCHR’s international crimes and accountability programme, told Al Jazeera.

“We think she should stand trial to defend herself against the allegations that she was involved in torture and she shouldn’t be appointed to any position.”

Haspel’s nomination still requires confirmation by the US Senate – a process she did not have to go through to be installed as deputy director.

“We could see her nomination fail,” Sifton says.

“This is a point where Senators should care about the rule of law. This is a bridge too far.”