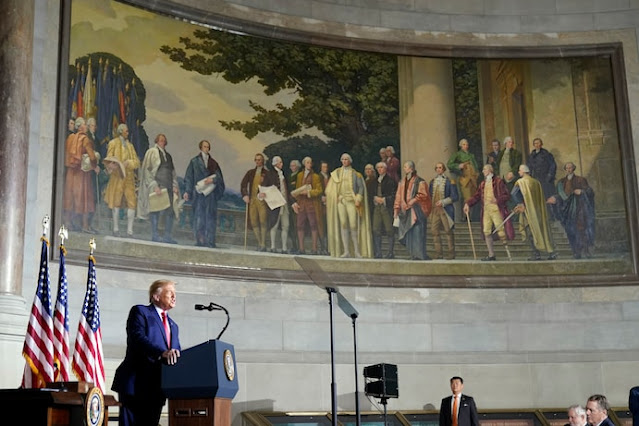 You’re reading an excerpt from the Today’s WorldView newsletter. Sign up to get the rest, including news from around the globe, interesting ideas and opinions to know sent to your inbox every weekday. https://ift.tt/3mIxFxY

It was a vintage scene of Trumpist agitprop. Last week, President Trump stood before original copies of the Constitution and the Declaration of Independence and declared a new national campaign to promote “patriotic education.” He tapped into a long-standing grievance within America’s right wing over supposed “left-wing indoctrination” in the country’s schools and universities, linking the unrest of this past summer to an education system that overly stresses the legacy of slavery, racism and sins of America’s past.

“Patriotic moms and dads are going to demand that their children are no longer fed hateful lies about this country,” Trump said. “American parents are not going to accept indoctrination in our schools, cancel culture at work or the repression of traditional faith, culture and values in the public square. Not anymore.”

There’s nothing particularly new about this latest shot across the bow in the United States’ divisive culture war, apart from the president using his bully pulpit to make it. Trump can’t exactly rewrite textbooks and curriculums, which are the province of the states and local districts. But it’s yet another dynamite charge to stoke a nativist base. Weeks away from an election, Trump said his administration would launch a national panel to create a “pro-American curriculum,” which he dubbed the “1776 Commission.”

That appears to be a White House response to the “1619 Project,” a Pulitzer Prize-winning set of essays published by the New York Times last year that sought to reframe the story of American democracy as centered on the legacy and experience of slavery. Many educators and historians see this sort of revision as a welcome complement to the standard teachings of history most Americans receive in their school systems and are bewildered by Trump’s tirades against liberal teachers. A recent study also poured cold water on the right-wing shibboleth that universities are zones of “indoctrination,” finding little variation in the political views of students before and after they enter college.

“I am not teaching my students to hate America,” said Chris Dier, a high school teacher in Louisiana who was the state’s 2020 Teacher of the Year, to my colleagues. “We are teaching our students to embrace our country, even the things that are negative. We’re choosing not to ignore the ghosts of our country’s past.”

But for Trump and his allies, it seems skeletons need to remain in their closets. Critics argue that his conspicuous reference to “patriotic” parents is simply another form of dog whistle to a predominantly White pool of voters uncomfortable with the ways the country’s demographics and wider cultural discourse are evolving. Trump’s messaging “wasn’t so much about American history as it was about America’s future,” Arwa Mahdawi wrote in the Guardian. “It was a promise to his base that he will Make America White Again.”

A great irony in Trump’s invocation of “patriotic” education is that it apes the language and decades-long policies of the Communist regime in Beijing, a frequent rhetorical punching bag for the Trump administration. But it also fits into a global battlefield where democratically elected right-wing nationalists have put universities and schools in their crosshairs. In many cases, educators find themselves on the front lines of political struggles they are doomed to lose.

Thousands of Turkish academics, including prominent liberal intellectuals, were removed from faculty positions and teaching jobs in recent years amid a broader purge carried out by President Recep Tayyip Erdogan’s government. In India, professors and student activists on university campuses have been demonized by the country’s jingoistic media networks and its ruling Hindu nationalist party, which has also sought to revamp the nation’s history textbooks.

Brazil’s far-right president, Jair Bolsonaro, came to power breathing fury over “Marxist” infiltration in the country’s schools, which he and his allies even claimed promoted “homosexuality and promiscuity.” In office, Bolsonaro’s government cut funding to the humanities and social sciences and ended an affirmative action policy that helped disadvantaged Black and Indigenous students enter certain postgraduate programs. For Bolsonaro, tackling the country’s education system is part of a far deeper ideological clash with the Brazilian left.

“Making vigorous use of digital tools, and jumping headfirst into a political vacuum created by a huge corruption scandal, members of the Bolsonaro family deployed the fear of communist conspiracy to great effect,” Vincent Bevins wrote in the Atlantic. “The ghosts of the Cold War haunt politics in the world’s fifth-most-populous country, and as another political crisis looms, the leadership is doubling down on conspiratorial thinking.”

The same is true in Hungary, where long-ruling illiberal Prime Minister Viktor Orban has waged a relentless culture war. His government has taken broad aim at independent nongovernmental organizations and other liberal entities, including forcing out the Central European University, one of the more celebrated institutions of higher education in the region. Orban has imposed revisions to school curriculums in an avowed bid to restore “national self-esteem” and hail the country’s Christian identity.

“There’s no such thing as a neutral education,” Zoltan Kovacs, a government spokesman, bluntly told the BBC earlier this year. “Educational systems are about values … about teaching what we think are the values of Hungarian society.”

Those values, though, remain fiercely contested. In recent weeks, students at one of the leading arts universities in Budapest blockaded and occupied their school in protest of the new Orban-aligned administrators who had taken over management of the institution.

“Until recently, universities were independent, state-funded entities from which it was difficult to withhold financial support,” wrote George Szirtes, a Hungarian poet and translator. The ruling party’s “strategic aim became to privatize the universities and, as had proved so successful with other enterprises, impose a board of government-appointed trustees to determine policy, not just in spending, but appointments, the curriculum and all other matters, on an ideological basis.”

That kind of power remains a pipe dream for Trump and his Republican allies. But recent events seem to make clear their eagerness to go down the same troubling path of demagogues and autocrats elsewhere.