Trump Is Said to Be Preparing to Withdraw Troops From Afghanistan, Iraq and Somalia 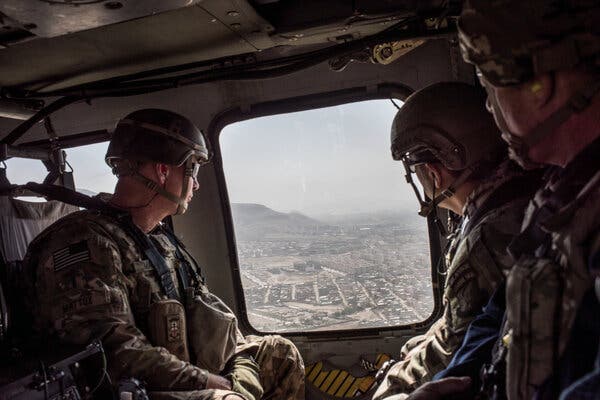 Facing the end of his time in power, the president is pushing to accelerate withdrawals from counterterrorism conflicts. He campaigned on ending the longstanding wars.

WASHINGTON — President Trump is expected to order the U.S. military to withdraw thousands of troops from Afghanistan, Iraq and Somalia by the time he leaves office in January, using the end of his time in power to significantly pull back American forces from far-flung conflicts around the world.

Under a draft order circulating at the Pentagon on Monday, the number of U.S. forces in Afghanistan would be halved from the current deployment of 4,500 troops, officials said.

In Iraq, the Pentagon would trim force levels slightly below the 3,000 troops that commanders had previously announced. And in Somalia, virtually all of the more than 700 troops conducting training and counterterrorism missions would leave.

Taken together, the cuts reflect Mr. Trump’s longstanding desire to stop shouldering the cost of long-running military engagements against Islamist insurgencies in failed and fragile countries in Africa and the Middle East, a grinding mission that has spread since the terrorist attacks of Sept. 11, 2001.

But the president’s aspirations have long run into resistance, as his own national security officials argued that abandonment of such troubled countries could have catastrophic consequences — such as when the United States pulled out of Iraq at the end of 2011, leaving a vacuum that fostered the rise of the Islamic State in Iraq and Syria.

Mr. Trump has also repeatedly pushed to pull out of Syria, but several hundred U.S. troops remain stationed there, partly to protect coveted oil fields held by American-backed Syrian Kurdish allies from being seized by the government of President Bashar al-Assad of Syria. The current deliberations over withdrawals would not affect those in Syria, officials said.

The plan under discussion to pull out of Somalia is said to not apply to U.S. forces stationed in nearby Kenya and Djibouti, where American drones that carry out airstrikes in Somalia are based, according to officials familiar with the internal deliberations who spoke on the condition of anonymity.

Keeping those air bases would mean retaining the military’s ability to use drones to attack militants with the Qaeda-linked terrorist group Shabab — at least those deemed to pose a threat to American interests. The smaller number of troops who would be left behind in Iraq and Afghanistan also would be sufficient to maintain some ability to carry out counterterrorism raids and strikes, officials said.

Mr. Trump said in a Twitter post last month that he wanted to have all 4,500 U.S. troops in Afghanistan home by Christmas, but top military and national security aides advised against such a precipitous withdrawal. The president eventually agreed to the smaller drawdown, officials said.

Mr. Trump’s national security adviser, Robert C. O’Brien, said last month that the United States would withdraw about 2,500 troops by early next year — indirectly rebuking Gen. Mark A. Milley, the chairman of the Joint Chiefs of Staff, for openly questioning that timeline.

NICHOLAS KRISTOF: A behind-the-scenes look at Nicholas Kristof’s gritty journalism, as he travels around the world.Sign Up

Conditions on the ground were not yet right, Mr. Esper is said to have written, citing continuing violence, the dangers a rapid pullout could pose for the remaining troops, the effect on alliances and fear of undermining peace negotiations between the Taliban and the Afghan government. The memo was reported earlier by The Washington Post.

Senator Mitch McConnell, Republican of Kentucky and the majority leader, delivered a thinly veiled warning to Mr. Trump from the Senate floor on Monday, suggesting that the president would put himself at risk of squandering his record of accomplishment in the Middle East and repeating the mistakes of former President Barack Obama, a predecessor he loathes.

“A rapid withdrawal of U.S. forces from Afghanistan now would hurt our allies and delight the people who wish us harm,” Mr. McConnell said. For a leader who has loyally stood by Mr. Trump on most domestic policy issues, the departure was notable.

“The consequences of a premature American exit would likely be even worse than President Obama’s withdrawal from Iraq back in 2011, which fueled the rise of ISIS and a new round of global terrorism,” Mr. McConnell said. “It would be reminiscent of the humiliating American departure from Saigon in 1975.”

Exiting foreign conflicts — and Afghanistan in particular — has been a central component of Mr. Trump’s “America First” agenda since he ran for office in 2016. That appeal has particularly animated his base of populist voters, many of them veterans who have grown weary of their roles in longstanding wars. The president views his record on this issue as important to any political future he might pursue. 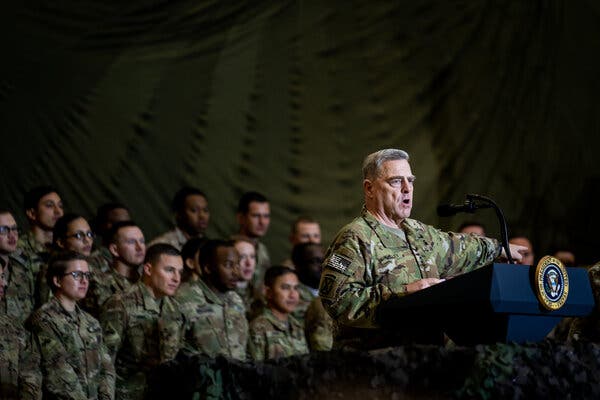 Mr. Esper’s caution on troop reductions was one of several factors that led to his firing. After his departure, a group of new officials arrived, including Douglas Macgregor, a retired Army colonel and a fierce proponent of ending American involvement in Afghanistan.

It is unclear if the remaining NATO and allied troops in Afghanistan — about 7,000 people who primarily train government forces — would also withdraw. But officials said some in the country’s north and west were likely to do so, as they are reliant on American transport and, in some cases, protection.

That would leave American forces to advise from one key U.S.-Afghan command center, helping the Afghan military marshal their resources and plan their defenses. Much of the rest would be in about five smaller regional targeting teams — and composed of small detachments of Special Operations forces — that would help with targeting insurgent groups.

The proposal to draw down to about 2,000 to 2,500 troops in Afghanistan comes as the country’s forces are besieged in the south and the north. Morale is low among Afghan security forces, and the uncertainty has led local political leaders to cut deals with the advancing Taliban.

October was the deadliest month for civilians since September 2019, according to data compiled by The New York Times. More than 200 civilians were killed.

Peace talks in Qatar between Afghan and Taliban negotiators have stalled primarily because of the Afghan government’s reluctance to use the February deal as a guiding document for the discussions.

Afghanistan specialists said that the accelerated but partial withdrawal could complicate policy choices for President-elect Joseph R. Biden Jr. and his incoming national security team, but it was preferable to a complete pullout.

“Quickly reducing to 2500 would narrow Biden Admin options and undercut peace talks, but wouldn’t create the utter upheaval of going to zero that fast,” Laurel E. Miller, a former top State Department official who worked on Afghanistan and Pakistan diplomacy for both Mr. Trump and Mr. Obama, said on Twitter last week.

Most American troops in Somalia, the war-torn nation in the Horn of Africa, are Special Operations forces stationed at a small number of bases across the country. Their missions include training and advising Somali army and counterterrorism troops and conducting kill-or-capture raids of their own targeting Shabab militants.

Mr. Trump’s push to leave Somalia before the end of his term comes at a delicate time: Somalia is preparing for parliamentary elections next month and a presidential election scheduled for early February. The removal of U.S. troops could complicate any ability to keep election rallies and voting safe from Shabab bombers. It also comes at a time of political turmoil in neighboring Ethiopia, whose army has also battled the Shabab.

The timing “could not be any worse,” said Brittany Brown, who worked on Somalia policy at the National Security Council in the Obama and Trump administrations. She said she did support pulling out of Somalia over all.

“This is not the time to do it, because this election is really important — this one matters a lot,” said Ms. Brown, who is now the chief of staff of the International Crisis Group, a nonprofit organization focused on deadly conflicts. “I hope this doesn’t send Somalia back into failed-state chaos, because this would embolden Al Shabab.”

It is not clear whether other parts of the U.S. government — such as C.I.A. operatives, the ambassador and other State Department diplomats who are based at a heavily fortified bunker at the airport in Mogadishu, the Somali capital — will also withdraw from Somali territory along with the military.

Somalia has faced civil war, droughts and violence from Islamist extremists for years. The United States intervened in the country as peacekeepers at the end of the George Bush administration, but abandoned it not long after the “Black Hawk Down” battle in 1993, which killed 18 Americans and hundreds of militia fighters.

The Shabab, an Islamist terrorist group whose name means “the youth,” emerged around 2007 and has violently vied for control of Somalia with occasional attacks outside its borders, including an attack on the Westgate shopping mall in Nairobi, Kenya, in 2013 that killed more than five dozen civilians and a deadly assault on an American air base at Manda Bay, Kenya, in January.

Shabab leaders pledged allegiance to Al Qaeda in 2012. In 2016, shortly before leaving office, the Obama administration deemed them part of the congressionally authorized war against the perpetrators of the Sept. 11 attacks. Under the Trump administration, the military sharply increased airstrikes targeting Shabab militants.
==
Eric Schmitt, Charlie Savage and Helene Cooper reported from Washington, and Thomas Gibbons-Neff from Kabul, Afghanistan. Jennifer Steinhauer and Nicholas Fandos contributed reporting from Washington.

« Strive Masiyiwa accused of stealing medical app and defaming the original makers (Previous News)
(Next News) Trump Is Said to Be Preparing to Withdraw Troops From Afghanistan, Iraq and Somalia »