Trump on McCabe Firing: ‘A Great Day for Democracy’

WASHINGTON (VOA) — Former FBI Deputy Director Andrew McCabe has been fired — effective immediately — U.S. Attorney General Jeff Sessions said in a statement released late Friday.“Based on the report of the Inspector General, the findings of the FBI Office of Professional Responsibility, and the recommendation of the department’s senior career official, I have terminated the employment of Andrew McCabe effective immediately,” Sessions said in the statement. 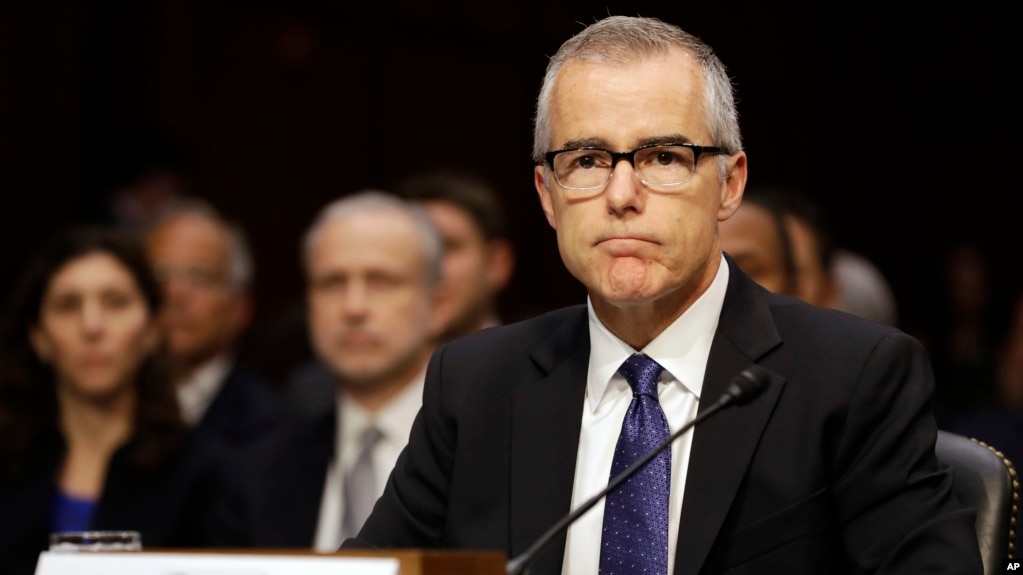 Andrew McCabe FIRED, a great day for the hard working men and women of the FBI – A great day for Democracy. Sanctimonious James Comey was his boss and made McCabe look like a choirboy. He knew all about the lies and corruption going on at the highest levels of the FBI!

McCabe, at one time the No. 2 official in the agency, whom President Donald Trump has publicly criticized for alleged political bias and reportedly wanted fired, stepped down from the FBI Jan. 30. He had planned to retire on Sunday — his birthday — with full benefits. However, now that he has been fired, some or all of his pension could be at risk.

In a statement following Sessions’ announcement McCabe said, “This attack on my credibility is one part of a larger effort not just to slander me personally, but to taint the FBI, law enforcement, and intelligence professionals more generally.”

McCabe was thrust into controversy just days before the 2016 presidential election when it was disclosed that his wife, Jill McCabe, a Democratic candidate for a seat in the Virginia Senate in 2015, had taken hundreds of thousands of dollars in campaign donations from a political action committee controlled by a friend of Democratic presidential candidate Hillary Clinton — then-Virginia Governor Terry McAuliffe.

Trump, then the Republican presidential nominee, used the disclosure to question the FBI’s impartiality in investigating Clinton’s use of a private email server, before it declined to bring criminal charges against her.

At the time, the FBI said that McCabe had consulted bureau ethics officials and that he and FBI lawyers “implemented a system of recusal from all FBI investigative matters involving Virginia politics.”

But the controversy continued to dog McCabe after Trump abruptly fired then-FBI Director James Comey over the Russia investigation in May 2017, a move that led Attorney General Sessions to elevate McCabe to acting director.

McCabe said in his statement, “I am being singled out and treated this way because of the role I played, the actions I took, and the events I witnessed in the aftermath of the firing of James Comey.”

McCabe, who served 22 years with the FBI, led the agency until August when Christopher Wray, a former assistant attorney general, was sworn in as the new FBI director.

Even after it was reported in December that McCabe would retire in March, when he became eligible for full pension benefits, Trump continued to excoriate the career government official.