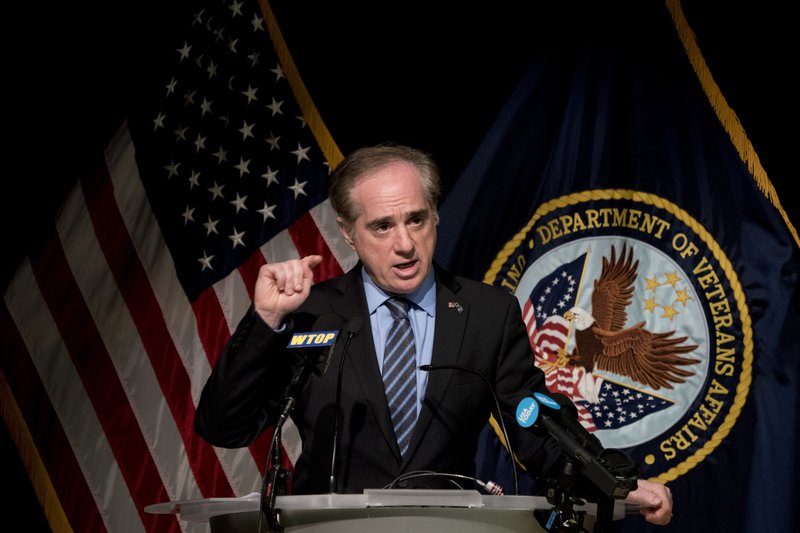 A Navy rear admiral, Jackson is a surprise choice to succeed Shulkin, a former Obama administration official and the first non-veteran ever to head the VA. Trump had been considering replacements for Shulkin for weeks, but had not been known to be considering Jackson for the role.

In a statement, Trump praised Jackson as “highly trained and qualified.”

Jackson has served since 2013 as the Physician to the President, and gained a national profile earlier this year for holding a sweeping press conference on the president’s health.

Brigadier General Dr. Richard Tubb, who trained Jackson, said in a letter read at Jackson’s briefing that the members of the White House medical team have been “figuratively Velcro-ed” to Trump since the day after his election.

“On any given day,” he wrote,“the ‘physician’s office,’ as it is known, is generally the first and last to see the President.”

A White House official said Shulkin was informed of his dismissal by Chief of Staff John Kelly before the president announced the move on Twitter Wednesday afternoon.

A major veterans’ organization expressed concern over the Shulkin dismissal and Trump’s intention to nominate Jackson, whom they worried lacked experience to run the huge department.

“We are disappointed and already quite concerned about this nominee,” said Joe Chenelly, the national executive director of AMVETS. “The administration needs to be ready to prove that he’s qualified to run such a massive agency, a $200 billion bureaucracy.”

Shulkin had continued to insist he had the full confidence of the White House amid continuing investigations over his travel and leadership of the department. He had agreed to reimburse the government more than $4,000 after the VA’s internal watchdog concluded last month that he had improperly accepted Wimbledon tennis tickets and that his then-chief of staff had doctored emails to justify his wife traveling to Europe with him at taxpayer expense. Shulkin also blamed internal drama at the agency on a half-dozen or so political appointees who were rebelling against him and Bowman, insisting he had White House backing to fire them.

But the continuing VA infighting and a fresh raft of VA watchdog reports documenting leadership failures and spending waste — as well as fresh allegations being reviewed by the IG that Shulkin used a member of his security detail to run personal errands — proved too much of a distraction.

It was the latest in a series of departures for top administration officials, including Secretary of State Rex Tillerson, who was fired by Trump earlier this month.

The sudden departure comes as Trump is currently seeking to expand the Veterans Choice program, a campaign promise that major veterans’ groups worry could be an unwanted step toward privatizing VA health care. His plan remains in limbo in Congress after lawmakers declined last week to include it in a spending bill.

Having pushed through legislation in Trump’s first year making it easier to fire bad VA employees and speed disability appeals, Shulkin leaves behind a department in disarray. Several projects remain unfinished, including a multibillion-dollar overhaul of electronic medical records aimed at speeding up wait times for veterans seeking medical care as well as expanded mental health treatment for veterans at higher risk of suicide.

Trump has selected Robert Wilkie, the Under Secretary of Defense for Personnel and Readiness, to serve as the acting head of the VA. It is government’s second largest department, responsible for 9 million military veterans in more than 1,700 government-run health facilities. The selection of Wilkie bypasses VA Deputy Secretary Tom Bowman, who has come under criticism for being too moderate to push Trump’s agenda of fixing veterans’ care.

During the presidential campaign, Trump repeatedly pledged to fix the VA, which was still reeling after a 2014 scandal at the Phoenix VA medical center, in which veterans waited months for care even as VA employees created secret waiting lists to cover up delays. Criticizing the department as “the most corrupt,” Trump said he would bring accountability and expand access to private doctors, promising to triple the number of veterans “seeing the doctor of their choice.”

Currently, more than 30 percent of VA appointments are made in the private sector.

« TRUMP: Mueller links former Russian Intelligence official to Trump campaign (Previous News)
(Next News) ETHIOPIA: Who is in coming PM Abiy Ahmed, what next for the country? »