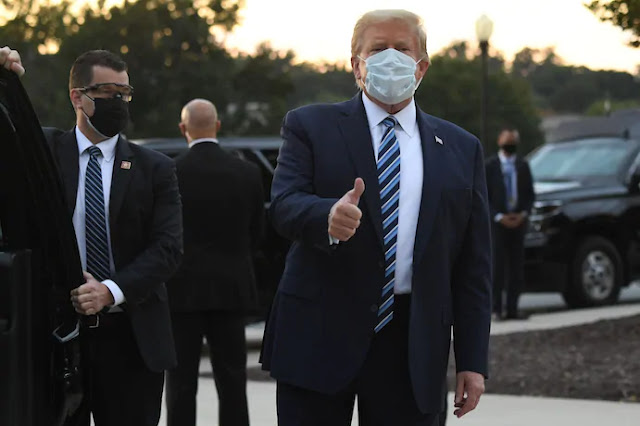 In a series of tweets posted less than 24 hours after he was released from the hospital, and still dealing with a Covid-19 diagnosis, Trump accused Pelosi of failing to negotiate in good faith, after she rejected an opening bid from Mnuchin in their latest round of talks.

“I have instructed my representatives to stop negotiating until after the election when, immediately after I win, we will pass a major Stimulus Bill that focuses on hard-working Americans and Small Business,” Trump wrote.

His tweets sent the stock market suddenly lower, as many businesses, households, and investors had been hoping for a sudden jolt of fiscal stimulus amid signs the economy was beginning to soften. The Dow Jones Industrial Average fell by about 330 points, or by 1.2 percent. The Nasdaq and S&P 500 also fell.

Barring another unexpected development, Trump’s declaration kills any chance of new aid for millions of Americans who remain out work and at risk of eviction.

Pelosi and Mnuchin had been working on assembling a new relief bill somewhere between $1.6 trillion — which was Mnuchin’s opening offer — and $2.2 trillion, which was the size of a stimulus bill passed last week by House Democrats. Talks had been moving slowly but appeared to be progressing. Pelosi last week expressed optimism about reaching a deal, although many Republicans had been skeptical.

Congress has not acted to pass economic or health care relief legislation since the spring, when lawmakers came together around four bipartisan bills totaling some $3 trillion in total spending, an unprecedented sum.

But many of the programs approved at that time, such as small business relief and enhanced unemployment benefits, have since expired, in some cases months ago.

The U.S. economy faces severe consequences without additional federal support. The airline industry is preparing to implement more than 30,000 furloughs in the coming weeks, and some surveys have found as many as 40 percent of restaurants will close within six months without additional aid. Tens of millions of Americans who have lost their jobs will receive no federal unemployment supplement absent an additional package with Congress, draining the U.S. consumer market and a key source of stimulus. Personal incomes already dropped in August as coronavirus relief approved this spring expired.

Powell issued a dire warning on Tuesday about the potential consequences of Congress and the White House failing to pass an additional stimulus deal. “Too little support would lead to a weak recovery, creating unnecessary hardship for households and businesses,” Powell said.

Pelosi last week urged airlines to hold off on layoffs pending a deal, saying that an airline payroll support program would be extended either as part of an overall deal or a stand-alone bill. It’s unclear now whether that will move forward.