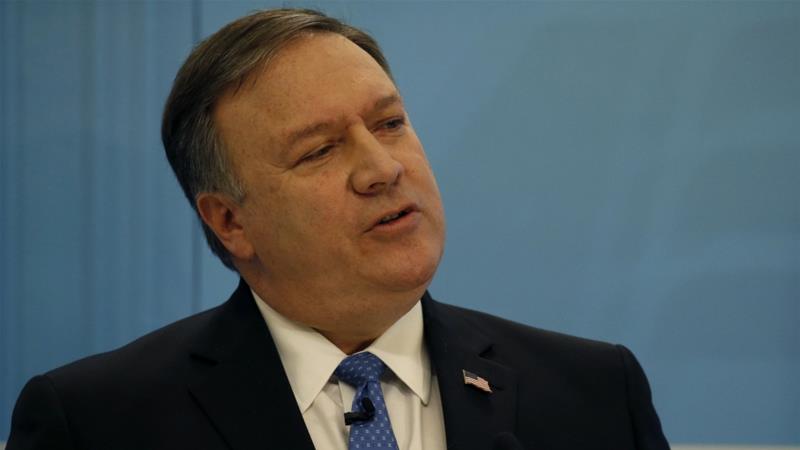 AL JAZEERA – Newly appointed Secretary of State Mike Pompeo has a controversial history. Where does he stand on the issues?

The appointment of former CIA director Mike Pompeo as US secretary of state occurred on Tuesday after months of rumours that Rex Tillerson was on the way out.

Tillerson was often depicted as a calm hand of “peaceful pressure” while US President Donald Trump usually opted for hasty decisions, bombastic rhetoric, and controversial policy positions. The two men disagreed on many issues, including the Iran nuclear deal and the Gulf crisis.

Pompeo, meanwhile, is a controversial figure who has voiced support for torture, wants to keep the prison at Guantanamo Bay open, and has a history of xenophobic remarks.

How will Pompeo’s past affect his role as the US’ top diplomat?

Pompeo was elected to the House of Representatives in 2010, representing Kansas state during the era of the Tea Party, the ultra-conservative branch of the Republican Party.

He ran against Democratic candidate Raj Goyle, a lifelong Kansas resident and son of Hindu-Indian immigrants.

That didn’t stop Pompeo from posting a link to a blog on his campaign’s Facebook page that called Goyle “just another turban topper we don’t need in Congress or any political office that deals with the US Constitution, Christianity and the United States of America!”

The slur was written by Bob Pinkstaff of Wichita, a retired US military serviceman. The remarks came after Goyle “dodged” a question about his religion during a debate before the 2010 election.

Goyle called Pompeo out for sharing the blog, saying the “bigoted attack” went “beyond the rules of engagement in politics”. Pompeo apologised, saying it was “inadvertently posted“.

In 2013, two months after the Boston Marathon bombing, Pompeo took to the House floor to accuse US Muslim leaders of failing to condemn “extremist” attacks.

“Silence has made these Islamic leaders across America potentially complicit in these acts,” he said.

Corey Saylor, former director of the Council on American-Islamic Relations department that monitors Islamophobia, told Al Jazeera that Pompeo being appointed secretary of state is a “continuation of the troubling policies we’ve seen coming out of the Trump administration”.

Regarding the message it sends to leaders of Muslim-majority states, Saylor said it will signal a lack of “respect” for their faith and ways of life.

Juan Cole, a visiting professor at Qatar University, was more direct about the US’ new top diplomat, describing Pompeo as “out of control”.

Cole said that Pompeo is an “Iranophobe” who heavily favours Saudi Arabia in the contest for regional hegemony.

Pompeo has commented that “if the Saudis and the Israelis want to combine against Iran this is all to the good,” Cole continued. “And of course Qatar is caught in the middle of that.”

Saudi Arabia is part of the Arab quartet that has maintained a land, sea and air blockade on Qatar since June, over alleged ties to “terrorism”. Qatar has denied the allegations.

Pompeo has also taken a stalwart stance in favour of “enhanced interrogation” tactics, or torture methods, including waterboarding, used to question those suspected of violent activities.

Pompeo criticised the administration of former president Barack Obama for closing “black sites” – secret prisons used to interrogate suspects overseas – and the requirement for interrogators to adhere to anti-torture laws.

In 2014, Pompeo accused Obama of neglecting to “take the war on radical Islamic terrorism seriously”.

The comments were said to have motivated Trump to consider Pompeo as the future CIA director. Trump said on the campaign trail for the 2016 elections that he would consider bringing back waterboarding “and a hell of a lot worse”.

At his 2017 confirmation hearing before US legislators to take the role of CIA chief, Pompeo said the agency would not restart torture on his watch.

Alberto Mora, senior fellow at Harvard’s Carr Center for Human Rights Policy and former general counsel of the US Navy, told Al Jazeera this was a “confirmation conversion” meant to ease the minds of wary legislators.

Still, “it doesn’t eliminate or supplant a clear record of support for torture throughout the rest of his career”, Mora said.

The former general counsel led a campaign against the use of torture in Guantanamo Bay, the US naval base in Cuba where foreign nationals suspected of acts of “terrorism” are imprisoned.

While Pompeo has backtracked on torture, his support of Guantanamo Bay appears to be unwavering.

The prison camp was one of the testing grounds for the “enhanced interrogation” tactics of the administration of former president George W Bush.

Numerous US officials have called for the prison’s closure, including Obama.

One of Obama’s first acts as president was to sign an order to close Guantanamo. The base was never closed. Pompeo has spoken favourably of this outcome.

“GTMO has been a goldmine of intelligence about radical Islamic terrorism,” Pompeo said in 2016.

Many of the 41 detainees at Guantanamo have never been tried. Of these men, 31 are being held in indefinite “law-of-war” detention. Five of these are recommended for transfer if security conditions are met.

Another seven have been charged by the military criminal justice system, which is separate from US civil law. Another three were convicted.

The newly appointed secretary of state wrote in an op-ed in the Kansas City Star in 2015 that “there is no evidence that these and other detainees wouldn’t quickly return to the battlefield looking to do harm to our soldiers, our citizens and our way of life.”

Omar Farah, a senior staff attorney at the Center for Constitution Rights who litigates cases at Gitmo, told Al Jazeera that “vilifying the prisoners is a tired trick to excuse a Guantanamo policy that was brutal and stupid from day one.”

Even if the 41 detainees are the “hardened terrorist” Pompeo contends, a “just, constitutional democracy owes even its worst prisoners better than 16 years and counting of indefinite imprisonment”, said Farah.

The appointment of Pompeo as the US’ top diplomat also signifies that “Trump’s instincts are sharpening”, the attorney added. Pompeo will also be a “disaster for Guantanamo.

“Former secretaries of state and their envoys had responsibility for negotiating Guantanamo releases. With Pompeo at the helm, it’s doubtful anyone leaves Guantanamo alive without a judicial order,” Farah said.

Even though Pompeo and his supporters might view the continued detainment of “terrorists” at Guantanamo a success, Mora predicted that “Pompeo is not likely to be a successful secretary of state.

“I say that primarily because Pompeo’s insistent opposition to human rights, as evidenced by his support of torture, makes him unqualified.”