Trump and Kim in quotes: From bitter rivalry to unlikely bromance 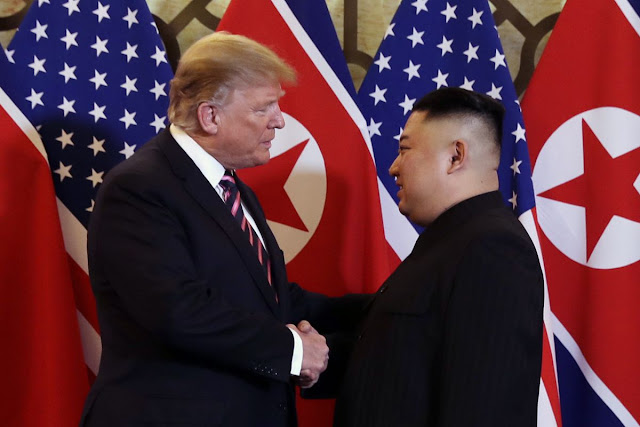 As Trump and Kim hold their second summit in Vietnam’s Hanoi, a round-up of what they said about each other since 2017.

From hostile to friendly, and at times awkwardly effusive, the relationship between former sworn foes Donald Trump and Kim Jong Un has blossomed into one of the most unlikely diplomatic bromances on the world stage.

Long are the days of “little rocket man and “mentally deranged US dotard”; now it’s all about the leaders of the United States and North Koreaexchanging “love letters” and enjoying “fantastic chemistry”.

“Both of their legacies are really rooted in keeping this relationship going further, and we have a very awkward type of love relationship between these two,” Jasper Kim, a professor of international studies at Ewha Womans University, told Al Jazeera.

“They both need each other and they are using these words as if they are in a sort of romantic interlude with one another because they are depending their legacy that this relationship continues.”

As Trump and Kim hold their second summit in Vietnam’s Hanoi, here’s a selection of key quotes about their relationship.

‘A madman with nuclear weapons’

“We can’t let a madman with nuclear weapons let on the loose like that,” Trump told Philippines President Rodrigo Duterte during a phone call in April 2017, shortly after taking office.

“North Korea best not make any more threats to the United States. They will be met with fire and fury like the world has never seen,” Trump says at an event on the topic of opioid usage in the US on August 8, 2017.

Two days later, a statement carried by North Korean state media says: “We cannot have a sound dialogue with a senile man who cant think rationally, only absolute force can work on him. This is the judgement made by our soldiers of the Strategic Force.”

Kim Jong Un of North Korea, who is obviously a madman who doesn’t mind starving or killing his people, will be tested like never before!— Donald J. Trump (@realDonaldTrump) September 22, 2017

‘Rocket man’ vs ‘US dotard’

In September 2017, in his debut speech at the United Nations, Trump dubbed Kim a “rocket man” on a “suicide mission.”

READ MORE
Trump-Kim summit 2.0: What you need to know

“The United States has great strength and patience, but if it is forced to defend itself or its allies, we will have no choice but to totally destroy North Korea,” he said.

“Rocket Man is on a suicide mission for himself and for his regime,” Trump added. “The United States is ready, willing and able.”

Kim shot back, vowing to “surely and definitely tame the mentally deranged US dotard with fire. A frightened dog barks louder.”
‘Sick puppy’

In the wake of an intercontinental ballistic missile test by Pyongyang in November 2017, Trump derided Kim as a “sick puppy”, drawing cheers from a crowd of supporters at a campaign-style rally.

A few weeks later, the International Campaign to Abolish Nuclear Weapons warned while accepting the Nobel Peace Prize that the bellicose rhetoric could trigger nuclear war.
Whose button is bigger?

Kim welcomed in 2018 with a New Year address in which he warned he had a “nuclear button” on his table.

“The entire United States is within range of our nuclear weapons, and a nuclear button is always on my desk. This is reality, not a threat,” he said.

Trump took to Twitter to declare that his was superior.

“Will someone from his depleted and food starved regime please inform him that I too have a Nuclear Button, but it is a much bigger & more powerful one than his, and my Button works!”

North Korean Leader Kim Jong Un just stated that the “Nuclear Button is on his desk at all times.” Will someone from his depleted and food starved regime please inform him that I too have a Nuclear Button, but it is a much bigger & more powerful one than his, and my Button works!— Donald J. Trump (@realDonaldTrump) January 3, 2018

The North’s official party newspaper dismissed Trump’s “swaggering” as nothing but the “spasm of a lunatic” frightened by North Korea’s power, and the “bark of a rabid dog.”
Singapore rendezvous

The tone between the two men changed markedly over the next few months.

In May, Kim released three US citizens detained in North Korea, which Trump hailed as a “positive gesture of goodwill”.

Trump later said that “everyone thinks” he deserved a Nobel Peace Prize for his contributions to warming US-North Korea relations.

“Great personality and very smart. Good combination. He’s a worthy negotiator. He’s negotiating on behalf of his people, a very worthy, very smart negotiator, absolutely. And we had a terrific day, and we learned a lot about each other and about our countries.”
‘In love’

Even as the two sides sparred over the exact meaning of the vaguely-worded Singapore declaration, with Pyongyang accusing Washington of “gangster-like” behaviour, Trump boasted of his rapport with Kim, who he said had proclaimed his “unwavering faith” in the US president.

“We will get it done together!” Trump wrote on Twitter in September.

Kim Jong Un of North Korea proclaims “unwavering faith in President Trump.” Thank you to Chairman Kim. We will get it done together!— Donald J. Trump (@realDonaldTrump) September 6, 2018

In his annual New Year’s Day address on January 1, Kim says he is prepared to meet Trump again at any time.

“I am always ready to sit down again with the US president at any time and will make efforts to produce an outcome that the international community would welcome,” Kim said – before issuing a warning.

“However, if the US miscalculates our people’s patience, forces something upon us and pursues sanctions and pressure without keeping a promise it made in front of the world, we have no option but to explore a new parth in order to protect our sovereignty and achieve peace on the Korean Peninsula.
‘Fantastic chemistry’

In his State of the Union address earlier this month, Trump boasted of his diplomatic prowess, saying if he had not been elected the US “would right now, in my opinion, be in a major war with North Korea.”

Just a few days earlier, he said Kim had the chance to turn his impoverished state into “a tremendous economic behemoth.”

“I like him. I get along with him great,” the president said. “We have a fantastic chemistry.”
‘Great leader’

In Hanoi on Wednesday, when they held a brief one-on-one chat and had a social dinner, the two again displayed outward signs of an unlikely bromance, clasping hands and appearing to share jokes as reporters shouted questions.

Trump described Kim as a “great leader” and said his country had “tremendous economic potential, unbelievable, unlimited” as he vowed to “help” North Korea achieve those goals.

In return, Kim appeared to have been counting the days until he saw Trump again.

“We came all the way to Hanoi to meet again, 261 days later,” he told the US president, vowing to do his best to ensure a “great outcome” from the talks.

MOZAMBIQUE: Child survivors of cyclone being sold into slavery