By Adam Taylor with Ruby Mellen, THE WASHINGTON POST

In much of Beijing, life had returned to something like normal weeks ago. Restaurants welcomed diners, people went back to work, schools reopened. The pandemic seemed like something that was happening to the rest of the world, not China.

Then Beijing announced Thursday its first domestically transmitted coronavirus case in 55 days — a 52-year-old man surnamed Tang. Tang told officials that he had not left the city in more than two weeks and had not been in contact with anyone outside the city.

Authorities soon discovered dozens more cases, mostly linked to a sprawling market in Beijing’s southeast. On Saturday, it reimposed strict “wartime” measures to prevent a second wave of infections. Residents, taken aback by a partial lockdown in the city, described something akin to deja vu.

“Two months of things loosening up, and life feeling like it’s going to be normal, and all of a sudden we’re back to where we were in February,” Nelson Quan, restricted to a compound in the Yuquan district, told Al Jazeera.

The number of cases remains small for a city of 22 million. But authorities are taking few chances: 1,200 flights in and out of Beijing’s two airports were canceled on Wednesday. Schools closed just a month after reopening. Since Tang’s case was announced, the city claims to have tested more than 3.5 million people.

In the weeks before this outbreak, Chinese officials had spoken proudly of their success in containing the coronavirus, suggesting China could be a model for others to follow. But the new cases show that model may be much more fragile than it first appeared.

The new cases in Beijing raise worrying questions — not only about how the virus could have gotten to Xinfadi market, which is the obvious concern, but also about whether livestock or even fish carry the virus. Chinese officials said the virus could have been circulating near the market since April.

One thing is painfully clear: This pandemic is far from over.

Beijing is battling a second wave, but other nations are not yet over their first. And as China takes its wartime approach to fighting the coronavirus, some nations are retreating. Amid fatigue, uncertainty and economic pain, they have fallen back, choosing to surrender rather than sacrifice.

In the United States, Vice President Pence wrote in the Wall Street Journal’s opinion section this week that the media got it wrong: The United States was not facing a second wave of infections, it was “winning the fight against the invisible enemy.”

Numerous experts, including Anthony S. Fauci, America’s top infectious-disease official, contradict that assessment. “I don’t like to talk about a second wave right now, because we haven’t gotten out of our first wave,” Fauci, head of the National Institute of Allergy and Infectious Diseases, told the Daily Beast.

As businesses across the country reopen, numerous states are seeing new peaks in their outbreaks, along with daily totals that dwarf the cases found in Beijing’s outbreak. None, however, are restricting travel or locking down neighborhoods in the same way. 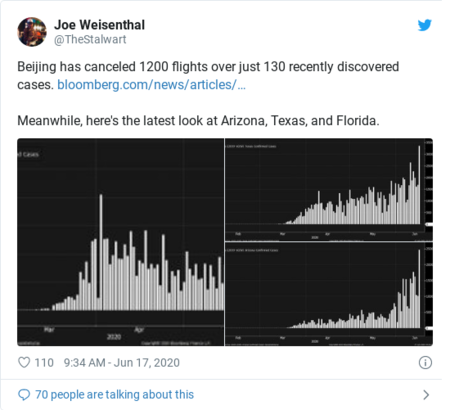 Globally, the numbers show that the pandemic is surging even as the world tries to move on. The United States is one hot spot, as are other big nations such as Russia and India. In Brazil, which has had the world’s highest number of daily confirmed cases since late May, President Jair Bolsonaro and other officials ignored lockdown warnings.

“We are doing something that no one else has done,” Pedro Hallal, an epidemiologist at the Federal University of Pelotas, told The Washington Post. “We’re getting near the curve’s peak, and it’s like we are almost challenging the virus. ‘Let’s see how many people you can infect. We want to see how strong you are.’”

Other countries that were initially more confident are now watching their good fortune turn. Even as Egyptian President Abdel Fatah al-Sissi touted his country’s success and condemned critics of his coronavirus strategy, doctors are warning that a surge in cases is overwhelming the system.

“Even the smallest pressure can make the Egyptian health system collapse,” a doctor in her 20s who works at one of Cairo’s premier educational hospitals said in an interview with The Post.

Beijing’s outbreak shows that even when the virus recedes, there can be no return to normality. The speed at which the coronavirus can spread — as well as the lingering uncertainties about how it spreads, who it kills and why — means heightened vigilance will remain a necessity.

There have been other worrying signs from other nations. Singapore and South Korea, which both appeared to have battered back the first wave of the outbreak, have had worrying flare-ups that led them to reimpose some restrictions. New Zealand, which announced it was coronavirus-free on June 8, saw the virus return via travelers from Britain.

Some officials openly admit that we will be playing a game of cat and mouse with coronavirus clusters for months, if not years.

“I personally believe that over the next year or several years, this virus will take root in our society,” Hitoshi Oshitani, a Japanese virologist and government adviser, said in a recent interview, adding that he doubted a vaccine would be effective and that a strategy of waiting for herd immunity was “nonsense.”

Any new outbreak — especially a new outbreak where the chain of transmission cannot be ascertained — is particularly worrying in China, a high-tech, authoritarian state that had staked so much on fighting back the first wave of infections in spring.

Indeed, the market cluster was discovered not because of government surveillance, but because of personal vigilance. Tang, the patient announced last week, had only mild symptoms but biked to a testing center anyway. He apparently understood that we are not back to normal yet.
====

• John Bolton’s book isn’t hitting shelves until next week, but news organizations including the Washington Post have obtained copies. As my colleague Josh Dawsey reports, the former national security adviser’s much-anticipated account of his time at the White House is rife with shocking allegations including: President Trump asking Chinese President Xi Jinping for help in the 2020 election and voicing support for Xi’s mass detention camps for Uighur Muslims in Xinjiang, Trump’s failure to understand basic geography and history, and Trump’s aides — even ones seen as staunch loyalists — ridiculing the president behind his back.

• The China details of Bolton’s book made for a less-than-perfect backdrop to the Wednesday meeting between Secretary of State Mike Pompeo and his Chinese counterpart Yang Jiechi in Hawaii. My colleagues have more on their face-to-face.

• Honduran President Juan Orlando Hernández said he’s tested positive for the novel coronavirus but is experiencing only mild symptoms and will continue to work. This makes him the second head of government worldwide confirmed to be infected by the coronavirus, following British Prime Minister Boris Johnson.

• After India and China’s deadly Monday clash in the Himalayas, the two nuclear powers traded blame Wednesday, pushing the relationship into uncharted territory. “For the moment, however,” my colleagues write, “neither India nor China appears willing to risk a broader clash: India is struggling with the coronavirus pandemic and an economic crisis, while China is grappling with sharply slowing growth and a spiraling rivalry with a far more threatening geopolitical opponent, the United States
====

Before the pandemic, top contractor received billions from government to help prepare the nation for biowarfare 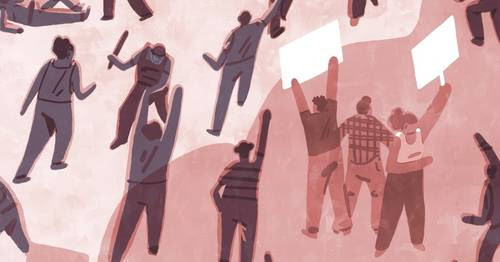 Trying to parent my black teenagers through protest and pandemic 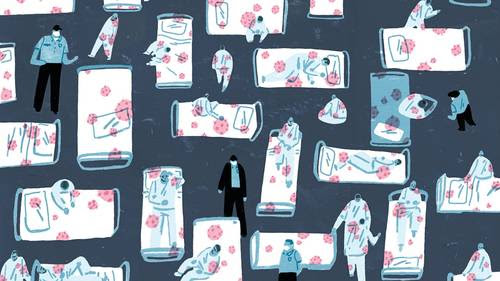 Europeans have lamented that the United States has relinquished its role as a global moral leader under President Trump. But the proliferation of Black Lives Matter protests around the world has solidified belief here that American society remains a superpower of influence, even if its politicians do not.

Protests have erupted in Australia, South Africa, Brazil. In war-wracked Syria, one artist painted a mural of George Floyd, the black man who died while being pinned down by a Minneapolis police officer, on a fragment of a wall in a bombed-out house. But nowhere outside the United States has the Black Lives Matter movement forced a more powerful reckoning than in Europe, where increasingly diverse societies have often done little to grapple with their colonial legacies and modern-day discrimination. In Rome, Paris, Amsterdam, Berlin, Brussels, Madrid, Lisbon and cities across Britain, protesters have taken to the streets to express solidarity with Americans but also to demand changes within their own countries.

“When things come out of black America, we see them. Then there’s an attempt at a boomerang throw,” said Gary Younge, a sociology professor at the University of Manchester, who has written about his experience as a black Briton traveling the American South. “Everybody sees George Floyd, Trayvon Martin, Eric Garner,” he said, referring to other victims of police violence. “And there’s a hope that if we throw that out there, and we highlight it, that it will come back and hit people on the head about the things that are going on here.”

There are signs that the European protesters’ demands are gaining traction. — Michael Birnbaum 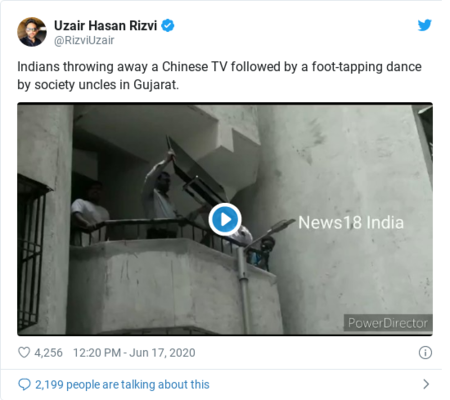