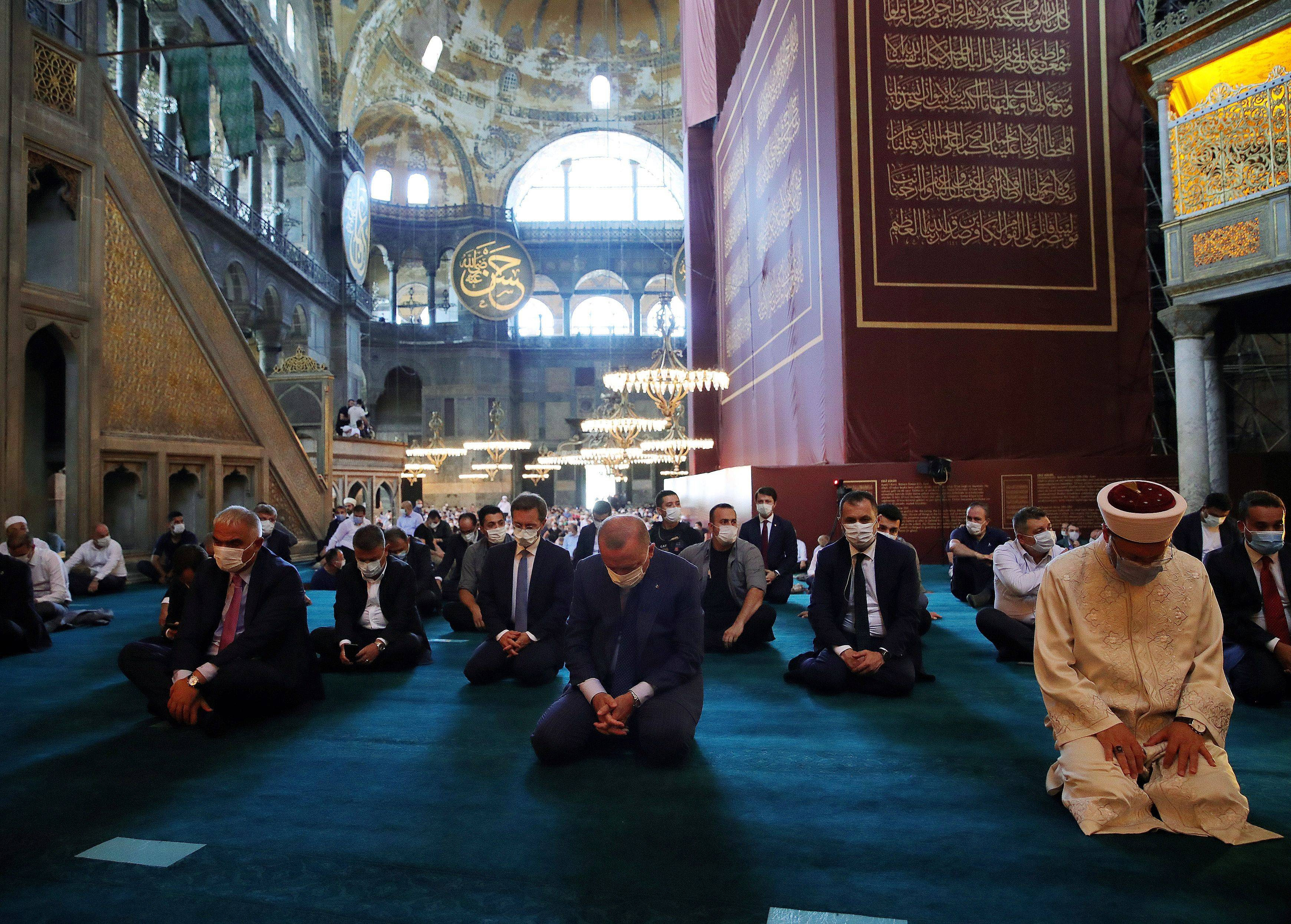 By Ishaan Tharoor with Ruby Mellen, THE WASHINGTON POST

A hundred years ago, French, British and Italian officials convened in a famous porcelain factory southwest of Paris to carve up the Ottoman Empire. The Treaty of Sèvres, signed Aug. 10, 1920, concluded months of fitful negotiations among the victors of World War I and paved the way for the remaking of the modern Middle East. It imposed terms on the defeated Ottomans widely seen as even more punitive than the measures dictated to Germany by the Treaty of Versailles earlier that year, forcing the empire to rescind all its claims to lands in the Middle East and North Africa.

Britain and France marked out separate zones of colonial influence from the deserts of Arabia to the Black Sea. Greece and Italy secured their own holdings in what’s now western and southern Turkey, including retaining control over myriad Aegean islands. Istanbul, once the capital of a transcontinental imperial juggernaut, would be internationalized along with the strategic straits that the city straddles. Ethnic Armenians and Kurds would be granted their own enclaves, while the Ottomans were left with a humiliating rump state in the Anatolian hinterland.

The blueprint set out by the treaty had a lasting legacy, in part prefiguring the borders and political futures of countries like Israel, Syria, Lebanon and Iraq. But it’s not remembered in the West as much as, say, the infamous clandestine Sykes-Picot pact, because of what followed in Turkey. Nationalists in the Ottoman ranks, led by Mustafa Kemal Ataturk, rejected Sèvres and waged a series of wars that cast out the French, Greeks and Italians from Anatolia and compelled the Europeans to settle on new terms with the Treaty of Lausanne in 1923, which defined Turkey’s modern borders. Nevertheless, the memory of colonial Western schemes to deprive Turkey of sovereignty — and the armed struggle needed to foil them — still stalks the Turkish political imagination.

“Sèvres has been largely forgotten in the West, but it has a potent legacy in Turkey, where it has helped fuel a form of nationalist paranoia some scholars have called the ‘Sèvres syndrome,’ ” wrote Nicholas Danforth, a historian of 20th-century Turkey, in a 2015 piece marking the 95th anniversary of the treaty’s signing. “Sèvres certainly plays a role in Turkey’s sensitivity over Kurdish separatism, as well as the belief that the Armenian genocide — widely used by European diplomats to justify their plans for Anatolia in 1920 — was always an anti-Turkish conspiracy rather than a matter of historical truth.” 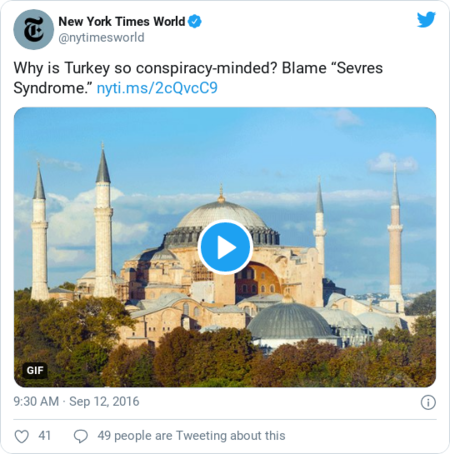 The treaty looms even larger now. Turkish President Recep Tayyip Erdogan, who has a penchant for posturing over historic symbols, began meeting toward the end of last year with the leader of the U.N.-backed government in Libya in a former palace of Ottoman sultans in Istanbul. In the aftermath of one of these sessions, Erdogan explicitly linked his government’s newly emboldened foreign policy to a moment of historical reckoning. “Thanks to this military and energy cooperation, we overturned the Treaty of Sèvres,” he said, hailing his country’s willingness to once more project power across the Mediterranean.

In the months since, Turkish drones and military support have helped the Tripoli-based government turn the tide of battle in Libya’s messy civil war. Erdogan, thanks to Libyan backing, has secured maritime exploration and potential oil drilling rights in the Eastern Mediterranean that put Turkey into a new tussle with other countries in the region, including Greece, Egypt, Cyprus and France. The new Turkish claims clash with those of Greece and Cyprus and flared long-running tensions among these troubled neighbors. 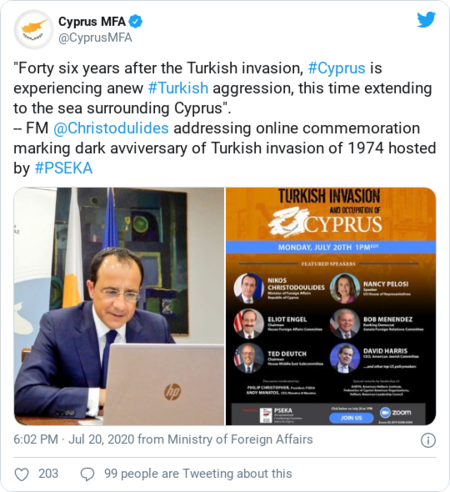 “A key driver of Turkey’s behavior is that, with the exception of the Tripoli government that controls half of war-torn Libya, Ankara—also involved in military action in Syria and Iraq—has virtually no allies in the region,” explained the Wall Street Journal’s Yaroslav Trofimov. “The first regional organization to cooperate on energy development, the East Mediterranean Gas Forum that was established last year, unites Egypt, Israel, Cyprus, Greece, Jordan, the Palestinian Authority and Italy. France, a vocal opponent of Turkey’s aims in the region and whose Navy frigate had a standoff with three Turkish vessels off Libya in June, has also applied for membership.”

France has tacitly backed the renegade Libyan general Khalifa Hifter and French President Emmanuel Macron has engaged in a war of words with Erdogan over their geopolitical differences, no matter their partnership as nominal NATO allies. While Turkish strategists conjure the idea of a “blue homeland” — an expansionist vision of Turkish rights and claims in the Eastern Mediterranean and Black Sea — officials in Athens, another nominal NATO ally, speak openly of the real prospect of military conflict with Turkey.

As Cold War bonds fade, older realities are coming to the fore. When Macron toured Beirut after the explosion last week, promising to help deliver a new political status quo for an infuriated Lebanese public, it was a reminder of the potency still of the French legacy in its former protectorate — and a welcome exercise of soft power for a president more tormented at home. 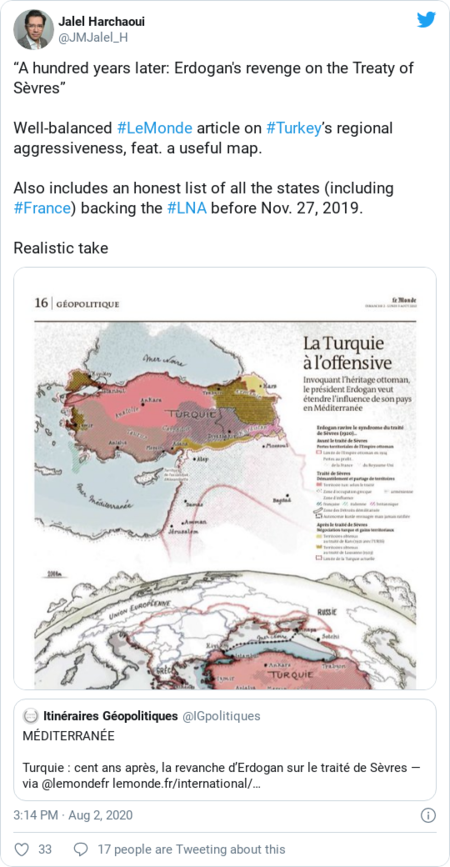 For Erdogan, the current squabbles are part of a nationalist power play that’s hardly unique to Turkey. “Turkish foreign policy is increasingly coercive and maximalist,” Yohanan Benhaim, a Paris-based Turkey scholar, told French daily Le Monde in a piece that explored Erdogan’s “revenge” on Sèvres. “It echoes what we see in other countries, the position of Israel which wants to annex the West Bank, and that of Russia, which annexed Crimea. International order is called into question. What we are witnessing in Turkey is only the translation of a global phenomenon, the questioning of the status quo and the international order which prevailed until then.”

In a column responding to the Le Monde piece, Ibrahim Karagul, a hard-line Turkish commentator, suggested the Western media wasn’t “wrong” in spotlighting the weight of Sèvres on Turkey’s newly assertive foreign policy. “It is closing the century-old bracket,” Karagul wrote of Erdogan’s agenda. “It is parting the doors to new centuries.”

« Today in History – August 10 — Library of Congress (Previous News)
(Next News) NTVUganda has added ENTERPRISE TALK SHOW: How to move from a peasant to a prosperous community change agent video »