In the days leading up to the Battle of Antietam, Confederate General Robert E. Lee concentrated his invading army outside Sharpsburg, Maryland. Victorious at Manassas in August, Lee’s Army of Northern Virginia hoped to garner new recruits and supplies in Maryland, a slave-holding state that remained in the Union. However, Union General George B. McClellan who closely pursued his rival, enjoyed a strategic advantage. A scout had discovered a copy of the Confederate battle plan and the contents of Lee’s Special Order Number 191 were well known to his rival.

At dawn on September 17, 1862 the hills of Sharpsburg thundered with artillery and musket fire as the Northern and Southern armies struggled for possession of the Miller farm cornfield. For three hours, the battle lines swept back and forth across the field.

Of all the days on all the fields where American soldiers have fought, the most terrible by almost any measure was September 17, 1862. The battle waged on that date, close by Antietam Creek at Sharpsburg in western Maryland, took a human toll never exceeded on any other single day in the nation’s history. So intense and sustained was the violence, a man recalled, that for a moment in his mind’s eye the very landscape around him turned red.

By mid-morning, the Confederate line was established along a country lane called Sunken Road. The soldiers crouched behind its high banks, unleashing heavy fire upon advancing Union troops. Eventually, the overwhelming number of Northerners broke the Confederate line. As the Southerners spun to defend their position, Union troops rained bullets lengthwise down the lane onto them. The road came to be known as Bloody Lane because of the tragic toll of death suffered there.

The Southerners retreated towards Sharpsburg, covered by cannon fire from General Stonewall Jackson’s artillery. The Union troops fell back in the face of the cannon fire and failed to pursue the Confederates.

Cautious to a fault, McClellan failed to advance quickly on the Confederates who had reached the town. Eventually, General Ambrose Burnside attacked, but was repelled by the ragged Southerners and newly arrived troops under Major General A. P. Hill. 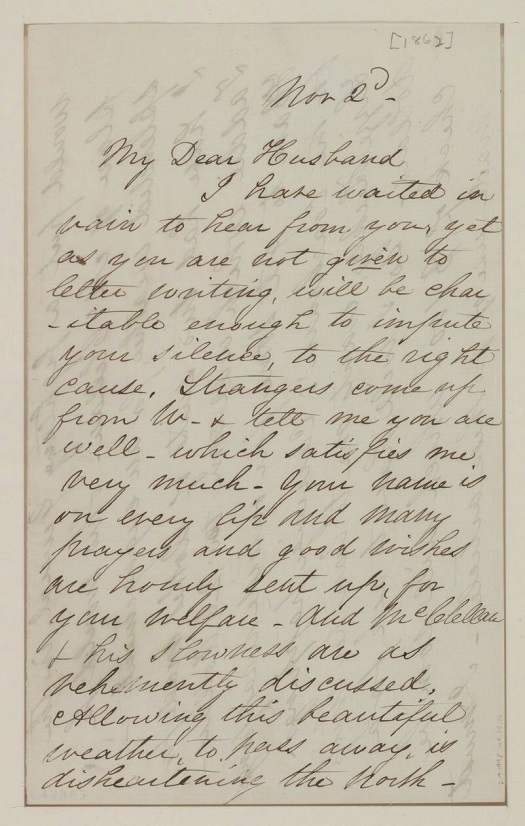 By nightfall, Confederates occupied the town of Sharpsburg ending the single bloodiest day in American history. More than 23,000 men were killed, wounded, or missing in action. The next day, Lee began his retreat across the Potomac River.

The Thomas Biggs Harned Collection of Walt Whitman Papers includes Whitman’s Hospital Notebook; the poet describes a barn and farmhouse used as a field hospital. Whitman’s 1862 Notebook provides an account of the fight for the bridge at Antietam.

Search the Digital Collections on Antietam to locate additional documents and photographs:
Photographic resources include Alexander Gardner’s field photographs from Antietam from the collection of 1,118 Civil War Glass Negatives and Related Prints taken by Mathew Brady and his associates.
View the panoramic photograph of Horse Shoe Bend, Potomac River, near Sharpsburg, Maryland, from the collection Panoramic Photographs.
Listen to “The Battle of Antietam Creek,” an unaccompanied vocal contained in the collection California Gold: Northern California Folk Music from the Thirties Collected by Sidney Robertson Cowell.
Search Today in History on Civil War to read more about key battles and events of the Civil War.
Browse Civil War Maps by subject, place, creator, or title for views of more than 2,600 Civil War maps and charts as well as atlases and sketchbooks.